← Popes, Pomp and Circumstance: the Sedia Gestatoria
Blessed Manuel Lozano Garrido, "Lolo". In case we think that our life is difficult. →

The Pope, The Broadcaster and The Drama Queen 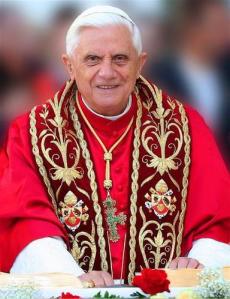 Fr Tim Finigan reports that Channel Four (the still taxpayer-fed English broadcaster with the remit of being “alternative” and “diverse”, which in the UK rather often means “deviant”) has announced that Peter Tatchell – the well-known homosexual paladin of all causes able to give him publicity and a stage – is going to produce a so-called “documentary” about the Holy Father’s career. Unsurprisingly, said “documentary” will be broadcast  on occasion of the Holy Father’s visit next September.

There are several outrageous issues here. The first is that Channel Four receives money from the taxpayer and it seems utterly disgraceful that public money be used to further the causes of a tiny minority of (deviant) fanatics. The second is that no serious journalist could ever claim that such a documentary from such a (deviant) man could have any appearance of impartiality, or at least some vague trace of halfway balanced reporting. The third is that the choice of the most widely despised “homosexualist” in the Realm to produce the “documentary” clearly shows the intention of Channel Four to stir controversies and reach a wide audience not through the quality of its reporting but through the clamour such controversies create. This isn’t journalism, this is purest activist poison.

Peter Tatchell is the kind of person who wants to censor song lyrics he finds “homophobic” whilst talking about “freedom” all the time. His life is a continuous search for a stage and there is no “alternative” cause he would not espouse if it gave him a bit of limelight (Aborigines, Vietnam War, Green Party, Pinochet, Mugabe,  Irak war…. the list is very long). He fought for years to lower the age of consent to 14 years and was behind an even more radical proposal to decriminalize every sexual act provided the age difference between the “partners” (read: homosexual boys or worse, children) is below three years. I am not making this up. This gives you a clear idea of the moral authority of the man. I can easily imagine that the one or other paedophile priest is a true fan of him.

Once again, Catholics are asked to remember that the Gates of Hell shall not prevail against the Church. All that Tatchell and his likes are going to obtain is to expose their fanaticism and awaken more sympathies for the Holy Father. Ask Dan Brown how much he has damaged Opus Dei and you’ll have all the reassurances you need.

Saint Michael the Archangel, defend us in battle.

Posted on June 9, 2010, in Catholicism and tagged Benedict XVI, Catholic Church, Catholicism, channel Four, homosexuality, papal visit, peter tatchell. Bookmark the permalink. Comments Off on The Pope, The Broadcaster and The Drama Queen.

← Popes, Pomp and Circumstance: the Sedia Gestatoria
Blessed Manuel Lozano Garrido, "Lolo". In case we think that our life is difficult. →