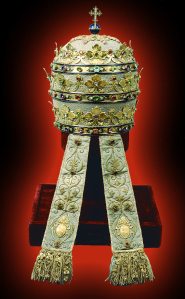 I have written some time ago about the lost and now slowly rediscovered solemnity and pomp of papal appearances. I read today from His Hermeneuticalness ‘s blog that the Papal tiara donated by members of the Belgian Court to Pius IX in 1871 could be used during the Papal visit to the UK.

This is good news for more than one reason. Firstly, it shows that Pope Benedict is – would be, might be – determined to give back to the Papacy the dignity which belongs to such a high and sacred office. Secondly, it is a beautiful reminder that not everything must be dumbed down to the lowest common denominator of shallow mass TV audiences. Thirdly and probably most importantly, it shows the will to proceed in a determined way with such a symbolic recovery of papal authority in the country where such authority is most likely to be aggressively fought against.

If the papal tiara is really used during the UK visit, this will be a clear sign that the Holy Father intends to visit the United Kingdom not in a defensive spirit – that is: merely trying to minimise the damage made by the inevitably loud protesters – but with a clear pastoral intent: to refuse to bow down to the rhetoric of the mediocre and the populism of the hypocrites and to show the Greatness, Holiness, Truth and Universality of the Only Church in an assertive and unashamed way.

The Britons – very much fond of ceremonies – will rapidly get the symbolism of the papal tiara and rightly see in its use a show of authority and a claim to spiritual supremacy to which they are not accustomed. They will be perhaps surprised at first but I do trust that, on reflection, they will understand the message. Some will like it and some other won’t, but no one will be able to ignore it.

Let us hope that Pope Benedict will listen to the advice of some of his more conservative minded counsellors and resolve to take a step toward the restoration of assertive Catholicism.
We had more than enough populism during the Pontificate of his predecessor. More than enough shows of humility which became humiliations. More than enough playing down the authority of the Pope. Now is the time for assertiveness, for conservative and undiluted Catholicism, for the return to what is right rather than popular.

Comments Off on Papal Tiara again