Fired for teaching Catholicism: The Land of the …. Free? 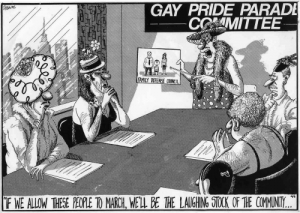 Read on American Papist the incredible story of Ken Howell, an adjunct professor at the University of Illinois. Mr Howell has been told that he will not be able to teach about Catholicism because his course “Introduction to Catholicism” mentions that Catholicism condemns homosexual acts; also that he has been so cheeky as to follow up with emails on the subject, after one student’s strong opposition to this Catholic teaching.

The episode is disconcerting for several reasons:

1) The course is about Catholicism. You can’t ask Catholicism to be what it is not. You either “introduce people to Catholicism” or you don’t.

2) The University in question has – as it appears from Mr Howell’s letter – an “Office of Gay, Lesbian, Bisexual and Transgendered concerns”. I kid you not. No trace whatsoever of an “Office of Catholic concerns”. The world has probably gone mad. Some universities certainly have.

3) The idea that people against a certain religion may find any “concern” about what that religion teaches is preposterous. Pure thought control. Not even I would have dreamt of saying that I have “concerns” with Hindus believing in reincarnation or Buddhists subscribing to metempsychosis.

4) Mr. Powell’s reaction is also entirely disconcerting. He presented the argument that if Catholic teaching about homosexuality is offensive, than he should be advised not to touch the matter in his course! This is an astonishingly weak reaction and one which defeats itself from the beginning. If you accept the idea that Catholicism may be censored, you can’t complain when it is. The idea of an “Introduction to Catholicism”excluding the controversial bits is as ridiculous as saying that there should be no “Introduction to Catholicism” if one is so bad as to……talk about Catholicism.

As always, the United States leads the way in political correctness gone mad. The case is now under judicial review and I do hope that the stance will be on the harsh side of “we are ready not to talk of anything which is of concern to lesbians, homosexuals, and other deviants”.

Kudos to the “American Papist” for having the guts to relate such extraordinary events instead of hiding behind the “we don’t discuss controversial topics” stance of so many Catholics, who are interested only in a quiet life and “going along to get along” with everyone.

Posted on July 19, 2010, in Catholicism and tagged Catholicism, conservative catholicism, Diocese of Peoria, Dr. Ken Howell, Homosexual aggression, Lesbian Fanaticism, University of Illinois. Bookmark the permalink. Comments Off on Fired for teaching Catholicism: The Land of the …. Free?.