“Oh Maria keep my data safe”: semi-serious reflections on the taste of some Catholic merchandise. 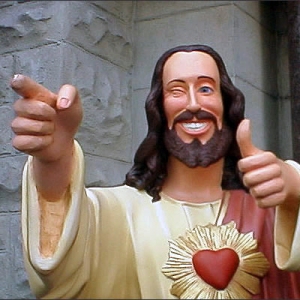 The Catholic Herald has a nice article targeting the questionable taste of much Catholic merchandise. The style is light-hearted, but the problem is real 😉

Yours truly also had his moment of shame, as the “luminous statue” therein portrayed reminded him of a similar (though technologically less advanced, no doubt) statue of Mary his sister used to have when a child. It was one of those blueish things which became luminous when you were in the dark. We darkened the room just to see it glow and were lost in wonder. Happy days.

In my eyes, there are two different problems:
1) the overabundance of tacky material and
2) the scarcity of good material.

I wouldn’t be too concerned with 1) as in the end de gustibus non est disputandum and if there is such a good market for these articles it means that a lot of people take the conscious decision of buying them 😉 . In the end, a questionable sacred image is better than no image at all and one can only be proud that Catholics do want to show their allegiance.

I am more concerned with 2), or the difficulty one has in finding articles in a reasonable price bracket which are not diabetes-inducing. I have looked for ages for a fitting Sacred Heart of Jesus for my bedroom. All the ones I saw had Our Lord depicted with an expression (I am sorry to say that, but it is merely a reflection on the quality of the relevant artist’s product) as if He had eaten too much chocolate, was not completely awake or had doubts about his manliness. I couldn’t imagine having any of such images on the wall of my bedroom for who knows how long and so I continued to postpone the purchase until I found a beautiful one from the excellent Southwell Books, (unfortunately not on sale anymore on that site) which instantly persuaded me. A manly Jesus, extremely expressive, with a serious but at the same time loving expression, looking straight at you and opening his arms to you in a beautiful embrace. Can’t look at it without a small act of contrition and a sign of the cross. No masterwork of the Renaissance, but the artist who made it surely put some thoughts into his work.

Same problem if you want to find a crucifix. The all-metal ones I always found too cold; plus, a lot of crucifixes nowadays have unconventional forms (the need to constantly re-invent everything is one of the most disquieting signs of the times….); the ones with a clearly plasticky Body I always found a fist in the eye; the “Christ on the Cross but surprise, already resurrected”-ones seem to me to downplay the message I want to get from a crucifix in the first place. I settled for a wood-and-metal one from the beautiful “Padre Pio Bookshop” near Victoria Station. Wood with metal body; very classic; timeless.

But try to find something nice about padre Pio to hang at the wall and the problems starts again (it would seem that tacky plastic statuettes are all the rage…..).
Also, still looking for a beautiful Padre Pio window sticker because I have no intention to settle for this, though I am sure it is far more stylish than the Sacred Heart of Jesus you see in the image above or the Maria USD stick whose inscription also adorns the title of this entry. A short google reaearch showed that you can buy it for EUR 59. For a USB sticker. I’m sure the producers will thank Mary, a lot. 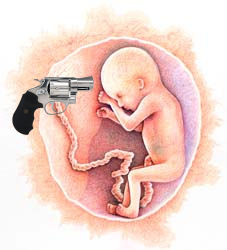 The Word according to Nancy

The American Catholic has this delightful video about that hideous fake Catholic, Nancy Pelosi.

The video has first an excerpt from a speech of the same Pelosi on the 6th May. If you go for a moment beyond the unspeakable smugness of the woman, you’ll notice that she says that her favourite word is… the Word and then she launches herself on a (most disgusting, coming from her) lecture about how “beautiful” the Word is (easy emotionalism) , and says that it, ooohhh, “contains everything” (more emotionalism) and that we must, ooohhhh, “give voice to the Word” and be judged according to how we do it in this life or in the next (and here she doesn’t even know how much she is right yet).

At a recent press conference, a CNS News journalist made reference to the 6th May smug fest and asked along these lines: “so when was the Word made flesh, was it at the Annunciation as the Scripture says or was it at the Nativity?”. Simple question, right? Well, the same woman you have just seen feeling oh so emotionally involved in her need to “give voice to the Word” and feeling oh so pure and beautiful whilst talking about it has the effrontery to answer “whenever it was (sic!), we bow our head when we talk about it….. in church, and that’s where I’d like to talk about that”.

1) a refusal to admit that the Word was made flesh when Mary said her “Fiat” (or whereabouts), which doesn’t match with Pelosi’s ideology. She just doesn’t know when, poor lamb. The Word must have had some static noise at the time, or perhaps she was just so busy feeling smug that she didn’t pay attention.

2) a refusal to answer the question (“I’d like to talk about that in church” obviously not being an answer).

It gets even funnier as CNS news, not having had any answer, follows up with an email re-phrasing the question in: “Did Jesus have a right to life from the moment of conception?”. Frankly it doesn’t get easier or straighter than that. Once again, the answer is dodged with the usual shamelessness: “the speaker answered the question. Thanks” is the answer from her press office.

I do hope that, wherever she goes, nancy Pelosi will now be persecuted by questions of this kind. She will obviously not answer them, but it might take away some of the smugness we have seen in her 6th may speech.

Comments Off on Nancy Pelosi and Jesus’ Right To Life.