Proposition 8: are the US still a democracy? 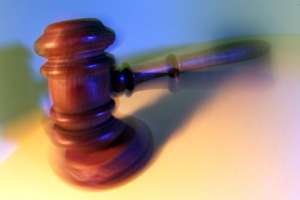 And you thought you had voted.....

I generally do not indulge in such rhetorical questions, but this time the question doesn’t appear very rhetorical.
For you non-Americans, the story in very short format. In 2000, the citizens of California vote in a referendum a proposition (“Proposition 22”) to ban homosexual so-called marriages. In 2008, the California Supreme Court strikes down the referendum decision because “unconstitutional”, that is: the court decides that the people are naughty and therefore their will doesn’t count.

The citizens of California then proceed to held a second referendum on Election Day 2008 to have homo-marriages banned (“Proposition 8”) and give it a majority for the second time; this time the approved proposal is that the ban be inserted in the Californian Constitution so that the judges of the California Supreme Court will not be able to play God or to decide that they are naughty and therefore their will doesn’t count, again.

With the California Supreme Court now out of the game a single man, a judge of the Federal District Court called Vaughn Walker, has decided once again that the citizens of California are naughty and so their will doesn’t count. This will now go to the appeal court (the notorious 9th circuit, secular and liberal as they come and therefore largely expected to upheld the ruling) and then to the Supreme Court. In his gracious omnipotence, the judge has apparently decided that the ruling be suspended pending appeal.

I will write in a different entry about the sentence in itself; details are starting to get through and the sentence seems to me an astonishing show of idiocy and ideological blindness, but this is for another day.

What I am thinking now is: what is happening to the American democracy? Do the American citizen really think that the sovereignty should ultimately rest by the judges?

I do not even want to begin the discussion whether a ban of homo marriages be “moral” or not. Of course it is, but it is not about that. It is about the fact that the people have chosen, and they have even chosen twice. We have here a situation where the electorate continues to decide in one sense and the courts continue to decide that they are wrong. To me, this is courtocracy battling against democracy.

This is sheer madness. It is as if there was a sort of Ayatollah of Political Correctness deciding that every piece of legislation must comply with the Supreme Mantra or be struck down. But the fact is: this is NOT democratic thinking. Democratic thinking is to accept that once a decision has been democratically achieved, this decision is respected as long as the voters do not take (in whatever form, through a referendum or through their democratically elected representatives) a new decision.

Take Italy. Once a Referendum has led to a decision a new referendum on the matter is forbidden for five years and never has the Corte Costituzionale dared to question a democratically formed decision. In a democracy, you just don’t walk over the electorate like that and when the people have spoken, no judge can interfere about the fundamental “morality” of the decision.

Here we have the absurd situation that several million people have voted for a very clear question involving fundamental moral principles and a single judge decides that the will of these several million people should just not be considered. One man! This is not a democracy anymore, this is dictatorship of the courts. The fact that further rulings are now expected does not change an iota in the fundamental matter that it will still be judges deciding whether the will of the people applies or not. Also the fact that the decision is suspended pending appeal does not change that it was the judge himself deciding so. Madness.

If the people of California are not free to even decide about the most basic ethical and religious principle of life in common anymore; if even fundamental expressions of the people’s will must be “cleared” by a judge after the vote; if several millions decide in one sense, but one man can decide that they were not entitled to do it, where has democracy gone?

I say it once again: in a country like Italy (with a fairly recent experience of dictatorship and therefore a high degree of sensitivity towards “expropriations” of this power through other powers of the State) there wouldn’t be such discussions in the first place. A referendum must be approved beforehand by the Corte Costituzionale to make sure that it is in harmony with the fundamental principles of the Italian constitutional system (say: you can’t have a referendum to abolish democracy, because democracy is a constitutionally protected principle) but once the referendum has been held the people have spoken and that’s that. Also unthinkable is the concept that the Court may feel authorised to decide about the morality of the decision. This is not for them to decide, but for the people themselves.

If someone (perhaps: American?) can give more colour, I am grateful. As it is now, the entire system appears bonkers to me.

“Pro Missa Tridentina” Website and the progress of Summorum Pontificum in the German speaking dioceses.

Coming soon to a church near you

Curious to see how things are going with Summorum Pontificum outside of Blighty, I found the Pro Missa Tridentina website. This website has been established by Catholic laymen (I have already written here about the fact that the Catholic Renaissance on the Internet is nowadays driven by the laity, this is another beautiful example) and has the purpose of, inter alia, providing a listing of all regular Tridentine Masses being celebrated in and around the German speaking dioceses in Europe. You will find the list under the “Hl. Messen” (“Heilige Messen”, “Holy Masses”) link.

In the German speaking world the recovery of the Latin Mass seems to be more advanced than in the United Kingdom. Not only there are regions with a predictably high concentration of Tridentine Masses (Bavaria is a small paradise, it would seem that everyone with a car doesn’t even need to be much concerned about fuel costs….), but even the number of Masses available in Austria was – considering the liberal infestation of many of its dioceses – largely above my expectations. The small German speaking Belgian minority is also provided with Latin Masses and even in the once-schismatic Dutch Church the Tridentine Mass is slowly but surely coming back.

I have written in the past about the fact that Latin was meant to be, up to the beginning of V II (Veterum Sapientia), the basis of Catholic liturgy and that the subversion of its role is one of the poisoned fruits of the Bugnini-poisoned years which followed. I see in the resurgence of the Latin Mass (we are talking Tridentine here, not even Latin versions of the Novus Ordo) a continuation of the same mentality informing Veterum Sapientia, a brilliant document and probably one of the most neglected and most rapidly forgotten in the entire history of the Church.

The addresses and postcodes make it very easy to locate a Tridentine Mass for non-German speakers who are in the region for business or holiday. Even without any concrete need for a Tridentine Mass it might be useful to browse and get an idea of what is happening, I found it encouraging and a much needed bit of good news. This is, of course, only the beginning and the very existence of Internet websites allowing one to locate a Tridentine Mass shows how far we still are from an acceptable situation. Still, I couldn’t scroll down the list of the churches offering the Tridentine Mass and escape a feeling that we are now at the turning of the tide. The statistical section allows one to follow the progress of the reintroduction of the TLM.

My hat goes off to the laymen who had the initiative and courage to organise such an Internet presence (starting before Summorum Pontificum, mind) and make of it a useful instrument of the “reform of the reform” now slowly but surely underway.

Comments Off on “Pro Missa Tridentina” Website and the progress of Summorum Pontificum in the German speaking dioceses.