Dominicans do have a tradition of being rather determined people.

A famous scene from Monty Phyton’s “Life of Brian” is the witty starting point to the right understanding of what it means to follow Christ. The exposition  is based on brilliant metaphors: bill payments, tuition costs, everyday sayings, military considerations and surrender’s conditions are all put together in a striking way.

The blog entry can be read in a couple of minutes, what you learn from it will probably stay with you forever.

Comments Off on Dominican Friars and Monty Phyton Scenes

Cardinal speaks out against BBC

The Daily Telegraph has interviewed Cardinal Keith O’Brien, the Archbishop of St. Andrew and Edinburgh, for their “Sunday Telegraph” edition, though I could only find the link to a “Telegraph” blog.

The Cardinal (who makes a beautiful contrast to the usual appeasement practised by our Craven-in-Chief, Archbishop Vincent “Quisling” Nichols) finds clear words to describe what is happening. This must be given great attention because it does not happen often. Try this:

“Our detailed research into BBC news coverage of Christianity in general and Catholicism in particular, together with a systematic analysis of output by the Catholic church, has revealed a consistent anti-Christian institutional bias.”

Please mind the words “consistent” and “institutional”. What he is saying is that the BBC is rotten to the core.

One is surprised that “detailed research” be necessary to become aware of such a self-evident reality, but I think he refers to the fact that they have gathered data in a statistically meaningful and provable manner.

Also note here: radically secular and socially liberal mindset. This is not a problem of this or that journalist not taking his job seriously. This is the entire institution devoted to propaganda work. It is at least consoling to see that BBC senior managers have the candor to admit what everyone in the Land can see, but make no mistakes: BBC managers “admit” anti-religious bias to improve their chance of advancement within the organisation.

Also (not so) surprising is that the BBC wastes tons of our money but does not think it necessary to hire a religious editor. This explains to an extent the appalling ignorance of everything concerning Catholicism and Christianity in general.

Basically it would appear that these people talk of religion without specific knowledge and without a serious instance able to ensure basic standards of information and that this is official and approved policy. Which is what they do anyway, so my assumption must be right.

Dulcis in fundo, we are informed that the BBC will air on September 15 a documentary about the Pope, care of…. a homosexual former Dominican Friar. This is not a joke, you can read it with your own eyes if you follow the link. I wonder where do they take such people from. It appears nowadays noone can make a documentary about the Pope who is: 1) a career journalist and/or 2) not homosexual.

BBC has long ago become the parody of information. It has created a system of dominant secularist, “minority-ist” and homosexual-ist culture within the organisation which takes care that only people with a certain agenda get to the key positions. The good news is that such a massive bias is evidently nothing more than a nuisance for those the BBC obviously considers its enemies; cue the packed churches during Easter after particularly virulent attacks against the Church and the Pope.

Kudos to the Cardinal for speaking out loud and for doing it in a timely fashion before the arrival of the Pope and before the airing of the “documentaries” made from politically correct deviants like Tatchell and the dominican friar turned pope expert and tv journalist. What he should now do is to continue to stay on the issue after the Pope’s departure. In time, this will undoubtedly cause some changes. But it must be a continuous campaign to increase people’s awareness of the problem, not the occasional outburst before days of particularly fanatical attacks against the Pope.

Comments Off on Cardinal speaks out against BBC

Texas Judge Still Knows What A Marriage Is 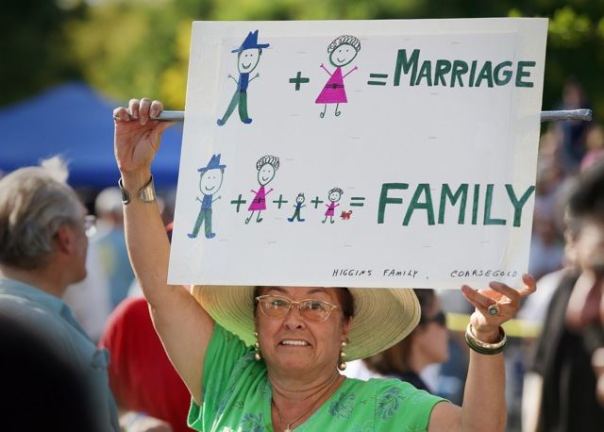 The Christian Post has an interesting article about the 5th Circuit of the Court of Appeal (evidently rather different from the notorious 9th circuit), who has negated to a homosexual “couple” (quotation marks, because there’s nothing like that) the right to divorce because… Texas does not recognise any “marriage” (see above) allegedly contracted between them.

The ruling is interesting because whilst the two oh so “gay” people maintained that they only wanted to put an end to a “marriage” contracted in Massachusetts only four years ago; but if the 5th circuit had allowed them to “divorce” this would have been tantamount to a recognition of the legal validity of their marriage, which Texas doesn’t. One can therefore imagine that some sly tricks might have been at play here.

The ruling points out to the other interesting fact that the marriage recognised as a fundamental right is…. the marriage, that is: the union between a man and a woman (for the more visual among you, see photo above).

“Unions” with people of the same-sex (and we may add: with cats, dogs, sheep, own close relatives, and with one’s favourite car) are not fundamental rights because they are “not deeply rooted in this country’s history and tradition”. Basically is nothing to do with Christianity , nothing to do with sound thinking and a lot to do with sexual perversion.

Kudos to the judge of the 5th Court, Kerry P. Fitzgerald, who decided on this case. It is beautiful to see that sanity is, in some place, still well present in the American judiciary.

Comments Off on Texas Judge Still Knows What A Marriage Is