The Dictatorship Of Atheist Bigotry: A Secular Take 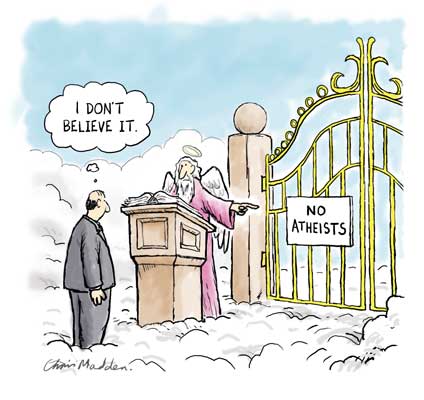 Spiked Online has another interesting article (they have written an entire series and seem to enjoy the issue immensely; good for them) about this year’s favourite sport: Catholic-bashing. The author Kevin Rooney is, not unlike other contributors, rather on the secular side of things; but like them, he has a commendable intellectual honesty allowing him to see through the easy slogan for the gullible and the me-too sunday-progressives.

Here are only some of Mr. Rooney’s many interesting observations:

The current Catholic-baiting springs from the cultural elite’s suspicion of anyone who, unlike them, has strong beliefs.

How very true. Modern secularists are like blind people wanting to blind those who see the light. They criticise our certainties because they envy us. At the same time, they do not want to follow us into the light. This seems to be a constant trait of human nature, visible already in those children becoming aggressive towards those who have what they haven’t (a certain toy, wealthier parents, or just a better personality). It is widely acknowledged that damned souls hate those in Paradise, hate their own misery, but at the same time would never do anything to become like the blessed. Looks like Peter Tatchell & Co. to me.

the intolerant view of Catholicism that has been so visible in recent weeks has come not from the working classes or from the traditional establishment, but rather from so-called liberals

somehow, the New Atheists seem incapable of acknowledging Catholics as potentially intelligent people who happen to subscribe to a set of beliefs.

Very True. Consider only the various blasphemous jibes of the typical atheist jackass, describing God as “your imaginary friend” or saying unspeakable things about the Blessed Virgin.

Many in the ‘Protest the Pope’ campaign seem to reserve much of their anger, not for Catholics per se, but for any group in society that professes a strong faith and belief.

Also true. But I would add: anger mainly for everyone who resists their desire to be “free” to do whatever they please.

The author unfortunately ruins his brilliant analysis (unsurprisingly, considering the ideological premises) when he says that The Pope’s visit “should have passed off without comment”. If the author had thought his premises to the end, he would have reflected that all those Catholic might actually be on to something and that such a massive phenomenon should – whatever one’s own personal position on God – never be dismissed as not worthy of attention.

Still, a rather brilliant analysis.

Comments Off on The Dictatorship Of Atheist Bigotry: A Secular Take