Cristopher Hitchens Still Doesn’t Get It

It is getting more than slightly pathetic to look how Christopher Hitchens, now rapidly approaching the day of the redde rationem, continues not only to ignore the fundamental issue his disease poses to everyone else’s attention, but is even peeved that people pray for his conversion.

the offer of prayer can only have two implications: either a wish for my recovery or a wish for a reconsideration of my atheism (or both). In the first instance, a get-well card – accompanied by a good book or a fine bottle – would be just as bracing if not indeed more so. (Also easier to check.) In the second one, a clear suggestion is present: surely now, at last, Hitchens, your fears will begin to vanquish your reason. What a thing to hope for!

This man’s logic is gravely flawed.

In the first instance, the invitation to send get-well cards and bottles of wine instead of prayers is, beside looking very tacky, utterly dismissive of the sincerity of those who pray for his recovery. Love is at work here, and the man doesn’t see it. By the way, this is in contrast with a previous interview of him, in which he had said he was fine with people praying for his recovery; apparently, it must now be wine instead.

In the second instance, Hitchens forgets a great truth, that “the fear of the Lord is the beginning of wisdom”. It is obvious that a faith solely based on fear is far away from the ideal of Christianity, but it cannot be denied that if fear can move this man (or any other man) towards the Truth, then fear is a welcome and powerful instrument for the salvation of souls.

All this escapes Hitchens. He is so much in love with his own love for himself that the idea of having to give away a bit of it seems repellent to him. “Better to slowly die in the terrifying conviction that I am right and complete annihilation awaits me than to bow to something greater than my love for myself”, goes his reasoning.
Mind, he still can’t escape the fear; he’ll just do his very best to refuse wisdom.

After this priceless pearl or arrogance, Hitchens proceeds to write a piece of so unbelievably massive tosh that one has to doubt his oh so often celebrated intelligence.
An intelligent man generally knows what he’s talking about and when Mr. Hitchens talks about Christianity he is supposed to know the first foundations of it; alas, this doesn’t seem to be the case.

Let us read what the man has to say:

“The deity whose intercession is being implored is claimed to be omniscient, omnipotent and omnipresent. It is fully aware of the situation. It can make me a believer if it chooses, or wave away my carcinoma. Why should it be swayed by the entreaties of other sinners?”

The mental confusion here is astonishing, and not due to medicines. It is a basic tenet of mainstream Christianity (and one which Hitchens, who writes about it, is not authorised to ignore) that Hell is a choice God leaves to every individual.
It is a bit too easy to wilfully choose Hell (as Mr. Hitchens continues to do) and then to imply that an omniscient God would make of him a believer if he wanted. Yes he could; but he won’t, and that’s the entire matter.

Mr. Hitchens continue to dodge the fundamental point: it is his choice and his responsibility, and it will be his freely chosen Heaven or Hell. He has written books about God, but he still can’t grasp the basics.

The last part, the “why God would be swayed by prayer” one, is of such ice-cold cynicism that it could only come from a man whose mother has committed suicide. Still, such an affirmation goes to show the absolute nothingness of these “thinkers”, unable to even conceive the infinite power of love and the way Love decides everything, and can change everything.
Mr. Hitchens may have some extenuating circumstances. Still, the tragic occurrences of his life are no excuse for such appalling refusal of love and for such appalling spreading of scandal and perdition.

One may have doubts, and keep them for oneself. One may have hard tests and be unable to pass them. But the spreading of blasphemies on a planetary scale cannot be excused by any personal circumstance. His stance is, in the end, his choice and his responsibility. His brother was born of the same mother and suffered the same drama, but he reacted differently in the end. The one chose the redemption of love, the other the coldness of self-deification.

Mr. Hitchens is receiving the biggest grace of his life. On the wretched platform of his disgraceful existence the last train patiently awaits, the fruit of love utterly unmerited and still freely given.
This train will stay there for a long time, months or perhaps years, patiently wait for him to make the step that would save him. Alas, he seems resolute in refusing to board salvation and in wanting to lose souls with his last breath.

Embarrassed Silence of the “Independent” About The Papal Visit’s Success

The “Independent” had certainly hoped in empty roads, the embarrassment of the catholic hierarchy only disturbed by the noise of the perverts protesting against him.
Alas, things have gone badly wrong for the usual alliance of liberals and sexually deviant. Turns out that everyday Britain still understands when something special is happening and doesn’t start to insult the Pope at the command of a bunch of wannabe intellectuals.

Here and here you see the reaction in today’s Independent.

Put in front of a reality televised live and not to be ignored even by the strongest effort of liberal will, the editorial cut of both article is rather a dry appraisal of the facts and an utter silence about what can only be called popular enthusiasm for the visit. There are even – rara avis – some facts which the “Independent” reports correctly, like the Pope being drafted into the Hitlerjugend, then deserting; facts that only a minority would have subscribed to months ago and that are now so much into the public domain that not even the “Independent” can deny them.

This damage control of the “Independent” (whose criticism of the Holy Father is then outsourced to some predictably unintelligent readers’ comments) is the first element that takes the attention. But there is another one: in the day in which the entire experience of the visit is reflected upon, the protesters are not thematised. So utterly ignored they have been, so insignificant they have been in countering the enthusiasm of ordinary people, that even the Independent prefers not to mention them.

The “protesters” have managed to get as much public attention as the “propagandamentary” of Mr. Tatchell, that is: almost zero. They have utterly failed in making of this trip a public outcry against the Pope; on the contrary, they have shown the extent of their own irrelevance in the Country at large. When even the “Independent” is embarrassed at mentioning you, you know you’re in deep trouble.

One can hope that even the one or the other pro-pervert politician will now listen and learn. Whatever the liberal press and the BBC may say, popular support is not on the side of Stephen Fry & Co. 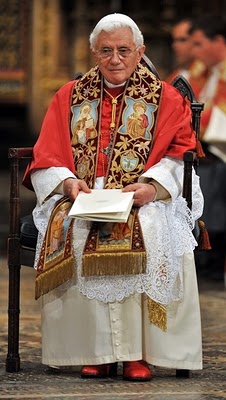 Pope Benedict and the Talking Stole

Rorate Coeli has a beautiful detail that will make you smile; very fitting for a Monday.

When in Westminster Abbey for the Evensong (about which I have written here), Pope Benedict wore a stole made for Pope Leo XIII.

Now, Pope Benedict is profound and intelligent enough not to wear a stole from a Pope who has been dead these more than 100 years simply because he likes the look of it. No, this stole was certainly a willed, conscious, tribute to a particular Pope in a particular circumstance.

Leo XIII is, as I have repeatedly stated on this blog, the Pope of Apostolicae Curae (please see link under “Church Teaching”). With Apostolicae Curae, Pope Leo XIII has not (importantly) decreed, but he has repeated the nullity of Anglican orders.

What a pleasant, saucy old German Pastor we have ; )

It Was Right Not To Cancel The Papal Visit

Try shooting through THAT glass....

Now that the four day-marathon has ended and the Holy Father has come back to his warmer and less aggressively atheist climates, it is perhaps fitting to compare what has happened with the exaggerated fears preceding the visit.

For months we have heard dire predictions about arrests and disorders. Once again, I must point out to the fact that the uncritical reading of whatever the press says leads to a vision of things which has not much in common with reality.

Foreign Head of States are not arrested when they visit a country. Not even in Zimbabwe, let alone in the United Kingdom. Adequate security is precondition to every State Visit. The idea that the man sitting in the pew be so concerned about the security of the Holy Father, but the vast security apparatus in charge of these visits has forgotten to adequately deal with the matter is just plain ridiculous.

What has, once again, happened is that the media – always desperate for the next bout of collective hysteria, because it sells – have given vast publicity to the deluded rants of spoiled children and that as a result millions have believed that these fantasies had a basis in reality. Peter Tatchell’s threat of arresting the Pope has never been more credible than the tantrums of a small child in need of physical correction. It was, in fact, just a matter of courtesy from the police to invite Tatchell beforehand and to make clear to him that every “attempt” would be a serious criminal offence; but I suppose that you try to be patient with small children.

Summa Summarum, the fact that the visit has not been plagued by any security concern whatever (the episode with the road sweepers was more a confirmation of the efficiency of the measures and the excellent work done by them than any indication of inefficiency or threat) should lead us to be, in future, more cynical as regard to various claims made by the press and expected to be swallowed by the readers/viewers without posing questions.

There has never been a security “threat”. This is not a tin-pot African country. It is even possible to organise an absolutely safe Football World Championship in one of the most corrupt, criminality-plagued countries of the world, how can it be difficult to organise a safe visit of the Pope in England.

Don’t believe what the press says. Not even half of it.
What the press publishes has no bearing with reality, but merely with the possibility to cause sensation.