It Was Right Not To Cancel The Papal Visit 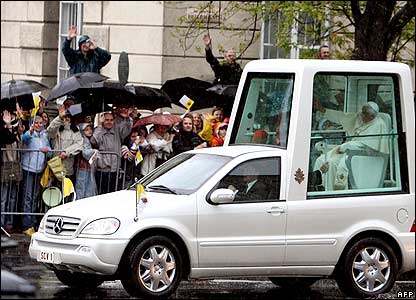 Try shooting through THAT glass....

Now that the four day-marathon has ended and the Holy Father has come back to his warmer and less aggressively atheist climates, it is perhaps fitting to compare what has happened with the exaggerated fears preceding the visit.

For months we have heard dire predictions about arrests and disorders. Once again, I must point out to the fact that the uncritical reading of whatever the press says leads to a vision of things which has not much in common with reality.

Foreign Head of States are not arrested when they visit a country. Not even in Zimbabwe, let alone in the United Kingdom. Adequate security is precondition to every State Visit. The idea that the man sitting in the pew be so concerned about the security of the Holy Father, but the vast security apparatus in charge of these visits has forgotten to adequately deal with the matter is just plain ridiculous.

What has, once again, happened is that the media – always desperate for the next bout of collective hysteria, because it sells – have given vast publicity to the deluded rants of spoiled children and that as a result millions have believed that these fantasies had a basis in reality. Peter Tatchell’s threat of arresting the Pope has never been more credible than the tantrums of a small child in need of physical correction. It was, in fact, just a matter of courtesy from the police to invite Tatchell beforehand and to make clear to him that every “attempt” would be a serious criminal offence; but I suppose that you try to be patient with small children.

Summa Summarum, the fact that the visit has not been plagued by any security concern whatever (the episode with the road sweepers was more a confirmation of the efficiency of the measures and the excellent work done by them than any indication of inefficiency or threat) should lead us to be, in future, more cynical as regard to various claims made by the press and expected to be swallowed by the readers/viewers without posing questions.

There has never been a security “threat”. This is not a tin-pot African country. It is even possible to organise an absolutely safe Football World Championship in one of the most corrupt, criminality-plagued countries of the world, how can it be difficult to organise a safe visit of the Pope in England.

Don’t believe what the press says. Not even half of it.
What the press publishes has no bearing with reality, but merely with the possibility to cause sensation.