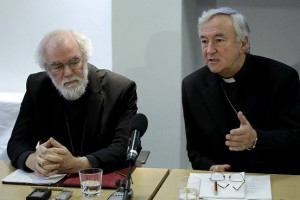 Just in case you had thought that I am the only one jumping from the chair when he reads what our disgraziato wants to smuggle as Catholicism, I refer here about the reaction caused by the same Archbishop Vincent “Quisling” Nichols on Mr. John Smeaton, the head of the Society for the Protection of Unborn Children. Mr. Smeaton has, as previously reported, his own blog, and an excellent one at that.

The ire of Mr. Smeaton was referred to an interview given by Vincent “Quisling” Nichols to the Daily Telegraph (the once conservative, now pinkish-PC daily newspaper) on the 11 September.

In this interview, Nichols is asked whether he thinks that the Church will ever “accept the reality of gay partnerships” (notice here: the “Telegraph” doesn’t write “homosexual”. “Gay” is the word of choice. As everything in the DT, it exudes political correctness. How very gay.) and he answers “I don’t know”. I admit to have read the article and to have given “Quisling” the benefit of the doubt; not being a mother tongue, I thought that this “I don’t know” could be meant in the same way as the “I’m not sure about that” used to express your clear disagreement; I have, therefore, not blogged on the matter.

Interestingly, though, Mr. Smeaton points out to another affirmation of the same man, interviewed by the BBC on the same matter and answering: “”I don’t know. Who knows what’s down the road?”

I have already mentioned yesterday, but repetita iuvant, what Vincent “Quisling” Nichols is bound to know and to say about these perverted “unions”:

In those situations where homosexual unions have been legally recognized or have been given the legal status and rights belonging to marriage, clear and emphatic opposition is a duty. One must refrain from any kind of formal cooperation in the enactment or application of such gravely unjust laws and, as far as possible, from material cooperation on the level of their application. In this area, everyone can exercise the right to conscientious objection.

I will also, like Smeaton, mention CCC 2357 here as I didn’t do it yesterday:

Homosexuality refers to relations between men or between women who experience an exclusive or predominant sexual attraction toward persons of the same sex. It has taken a great variety of forms through the centuries and in different cultures. Its psychological genesis remains largely unexplained. Basing itself on Sacred Scripture, which presents homosexual acts as acts of grave depravity,141 tradition has always declared that “homosexual acts are intrinsically disordered.”142 They are contrary to the natural law. They close the sexual act to the gift of life. They do not proceed from a genuine affective and sexual complementarity. Under no circumstances can they be approved.

I’ll avoid sending my adrenaline sky-high just writing what I think of this disgraziato. Read and reach your conclusions for yourself. Unbelievably, this is an archbishop of the Only Church. It’s like listening to a Nancy Pelosi with some brain; or to an Anglican with some fear of actually being disciplined.

“..as a Catholic parent, I am in a position to say, and on behalf of Catholic parents I meet up and down the country, that Archbishop Nichols’s, my archbishop’s, comments are dangerous to the souls of my children”

He later quotes from Evangelium Vitae and points out that:

“it is an illusion to think that we can build a true culture of human life if we do not offer adolescents and young adults an authentic education in sexuality, and in love, and the whole of life according to their true meaning and in their close interconnection”.

Archbishop Vincent “Quisling” Nichols is not interested in all this. He doesn’t give a penny for two thousand years of Christian teaching; he pretends not to know Vatican documents on the matter; he pretends (we have seen it yesterday) that Pope Benedict is even of his opinion; he even pretends to completely ignore what JP II’s Catechism very clearly says on the matter.

This man is just a disgrace for the Church and an enemy in our midst.

The address where to send your email of complaint is clero@cclergy.va

Please point out to this scandal. Let us help those of good will in the Vatican (I’m sure there is someone, and more than someone) to clean the Church from their enemies.

← Religious Anglicans And The Problem With The Truth
LA Times Agrees With Conservative Catholics on Catechesis →
Loading Comments...