Foward in Faith Prepares To Swim, But Do They? 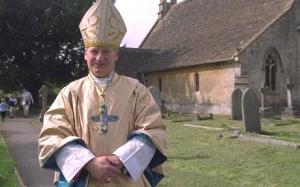 Read here about Anna Arco reporting that the Anglican bishop of Fulham is preparing to take up the Ordinariate.  In itself, this is not shocking news and was in some form largely expected. What in my eyes is more surprising is the astonishing declaration of Mr. John Broadhurst that Forward in Faith be, as reported by Arco, “not an Anglican organisation”.

I have written here and elsewhere on several occasions that I see a problem in the commingling of Catholicism and Anglicanism. Catholicism and Anglicanism are like fire and water. They just can’t mix. It must be clear to every convert that he is moving from Lie to Truth, not from one truth to another one.
Every element which would in any way whatsoever persuade Anglicans in the process of converting that nothing much is really happening (as some of them have been known to say on several blogs and forums) and that they would not become, but merely “continue to be” catholics is intrinsically heretical and must be rejected in the strongest form.

In the case of the Anglicans, the problem is made more acute by their inveterate habit of bending whatever statement of principle to their own particular convenience of the day, with people of the most diverse doctrinal persuasions happily coexisting under the same roof without seeing a problem at all. They have their “39 articles” but many of them decide which ones of them they want to follow, or even whether they should be considered binding in the first place, but opposite views on this matter don’t seem to bother them much. They have people agreeing with women priests and people strongly disagreeing with them, but astonishingly they don’t see this as making communion impossible. They have people in their midst wanting to remain within Anglicanism even if they disagree with both priestesses and bishopesses and one really wonders what their concept of “church” is. In short, there are people there showing a long habit of astonishing mental gymnastics and ability to adapt to whatever they want to think and whatever it is convenient to say.

Now, I wholeheartedly agree that even a person highly trained in such compromises and exercises in doublethink can – through prayer and by the grace of God – see the error of his ways and become an excellent and orthodox Catholic. But I wonder whether they will be helped in achieving this result by suggesting to them – because this will be the frequent effect of Mr. Broadhurst words – that when they were part of the Church of England, they actually weren’t and when they were wrong, they were actually right.

It seems to me as if the message which risks to be received is that what is required is not a real swimming, but merely the mooring of an Anglican boat on the other side of the Tiber, with the implicit result that many of them will think that the boat was the right one in the first place and has always been. In this case the conversion would not do anything for the soul of the converted, but merely endanger it much more gravely because of the open heresy thus brought within the Only Church.

Of course, in theory nothing prevents a convert to fully understand the implications and extent of his step by continuing to call the thus converted organisation with the same name. But in practice I see trouble coming. This, particularly considering the extreme affection for this kind of mental gymnastics and plays with words which is, alas, so common in Anglican thinking.

Comments Off on Foward in Faith Prepares To Swim, But Do They?