……And They Had Big Tasty Menu Ever After…. 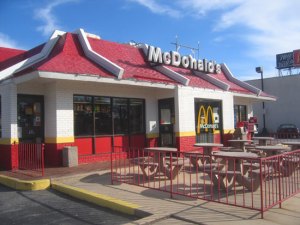 I must always cringe at those american films with a Protestant marriage. You know what I’m talking about. The last one I saw was in the last movie with Catherine Heigl. Movie’s name already forgotten, but you know what I mean anyway.
Generally, the ceremony happens in a prosaic place (like a garden; what if it rains; oh well…); the ladies are dressed in the same way as if they were at the stadion, or as if they found the event such a great fun; the individualised marriage formulae are so unbearably sugary that I am reminded of the “dickus biggus” scene in “Life of Brian”; and then the hopeless kitsch of the entire apparatus; the prepared speeches; the meetings to rehearse the prepared speeches, and the tired jokes. How embarrassing.

I look at those movies and hope that in real life, people over there marry in a different way. Solemn, dignified, spiritual. Fitting to the sacrament they are celebrating. And, hopefully, in a church, which is where sacraments are supposed to be administered: in God’s house, not in your garden.

If, on the other hand, they don’t, then I begin to understand a couple of things. If it’s not sacred, then it’s better be fun. If it’s not a solemn promise made in front of God, then why should it be made in a church. You don’t buy cars in churches after all. Even if they often last longer than a marriage.

If this is how things are, then one understands how marriage becomes something which must be fun and rather practical. To this effect, may I suggest McDonald’s. You can have the reception together with the ceremony. Catering & Co. all very sensibly arranged. No hassle of choosing menues, either. Your friends don’t feel obliged to abandon their usual shorts and flip flops; hey, it’s supposed to be fun!

Apparently, it all works very well in Hong Kong. As the company spokeswoman(1) noticed, many couples had their first dates, fell in love and even had their marriage proposals take place at McDonald’s, so “it makes it particularly meaningful and memorable to hold a wedding party there”. A proposal at McDonald’s. How romantic. Yes, I understand that in such circumstances a marriage elsewhere would be unconceivable. Burger King is, clearly, out of the question.

I am not peeved at McDonald’s. Laugh at me as much as you please, but I do like the Big Tasty and their fries are, I must say, always excellent. I merely wonder what has become of a world once built on important choices, made after very careful reflection; of commitments that could resist the strain of disagreements and the unavoidable difficult times; of the idea of solemnity, and of the idea of sacredness.

Sacredness, this is the word. Sacralità.
Not much en vogue now, is it?
The flip flop generation marries at McDonald’s.
Or if you’re lucky, in a garden.

(1) Thank God they still don’t have the “spokesperson” over there.

No time yet for a more detailed analysis and please forgive the absence of the usual embellishments.

Both Dolan and ++ Vincent “Quisling” Nichols will have to wait. Italian troop raised around one-third in one go and provided that they are orthodox, this little Italian heart can’t be displeased.
High incidence of Vatican elements anyway. I think both these elements might work for Scola at the next conclave.

The names are all here.

Feel free to add your own thoughts on the Cardinals you already know.

The 80 years rule is making the position of Cardinal more and more detached from that of elector, as the latest numbers show.

More on this as soon as I can research a bit.