“Standing Erect In The Midst of Moral Ruin”: Casti Connubii 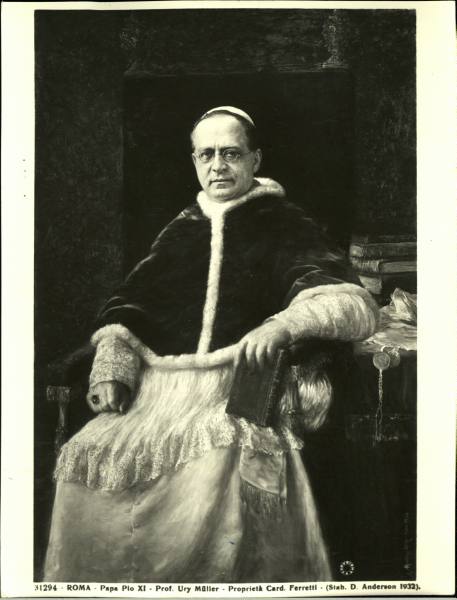 Some people think (I know they do, though it is beyond me how this happens 😉 ) that this humble correspondent is too harsh towards the Heresy; that he shouldn’t use this word, heresy, at all; that to do so is rude and (how was the word again?) uncharitable.

Here (courtesy, once again, of that Catholic wonder called Rorate Coeli; you’ll have to scroll down to the 6th January 2011) we have another example of how heresy, deprived of the help of the Holy Ghost, leads into fatal error and contributes to the demolition of Christian values and of Western societies.

At the Lambeth Conference of 1930, the Anglicans opened the door to contraception. They did it in the usual way such things happen, as taboos are seldom broken openly and defiantly. They just adjusted and tweaked the Truth to the point where it suited the times enough as to allow those people who really wanted to disobey the rules to feel authorised to do so. The issue was contraception, the wording is as follows (emphases mine):

“Where there is clearly felt moral obligation to limit or avoid parenthood, the method must be decided on Christian principles. The primary and obvious method is complete abstinence from intercourse (as far as may be necessary) in a life of discipline and self-control lived in the power of the Holy Spirit. Nevertheless in those cases where there is such a clearly felt moral obligation to limit or avoid parenthood, and where there is a morally sound reason for avoiding complete abstinence, the Conference agrees that other methods may be used, provided that this is done in the light of the same Christian principles. The Conference records its strong condemnation of the use of any methods of conception control from motives of selfishness, luxury, or mere convenience”.

This is the same game we have seen at play about divorce, abortion and homosexual relationship and it is the same game we are now seeing played about euthanasia. You don’t try to slam the door open, as this would never succeed. You just open it very little, and leave it to the times and the shift in moral values – shift in values that your first opening will invariably introduce – to open the door completely until there is even no remembrance that in the past the door was always supposed to be shut, no ifs and no buts.

Thankfully, there is one shop that is the Only One and whose moral values are not shaped by the desire to do as one pleases. Thankfully, Christ has given us a Church against which the Gates of Hell will never prevail.

The Church (the Only One) reacted promptly to the convenient and politically correct pollution of Christian values operated by the Anglicans. The Church knows that when you begin to set the door ajar, it is only a matter of time before it is wide open. The Church also knows that Truth has no “best before” date and is in no need of being turned upside down under the pretence of allegedly using “the same Christian principles”.

Below is the reaction of the Church, with the encyclical letter Casti Connubii, recently turned 80 (emphases mine):

“Since, therefore, openly departing from the uninterrupted Christian tradition some recently have judged it possible solemnly to declare another doctrine regarding this question, the Catholic Church, to whom God has entrusted the defense of the integrity and purity of morals, standing erect in the midst of the moral ruin which surrounds her, in order that she may preserve the chastity of the nuptial union from being defiled by this foul stain, raises her voice in token of her divine ambassadorship and through Our mouth proclaims anew: any use whatsoever of matrimony exercised in such a way that the act is deliberately frustrated in its natural power to generate life is an offense against the law of God and of nature, and those who indulge in such are branded with the guilt of a grave sin.”

Note the political incorrectness of Pius XI’s words. He makes clear that the Christian tradition on the matter was uninterrupted, not even touched by the heresy of Luther and by the following ones. He treats the Anglicans with a (with today’s eyes) shockingly brutal “some” which doesn’t even leave them the dignity of a group worth the legitimation of their existence, like “ecclesial community”. He proceeds to a strongly worded statement that God has given to the Church Only the task of preserving the Truth, and that this Truth speaks to us through the Pope’s mouth. Clearly, vague innuendos to Catholic truths and barely understandable statements with Catholicism hidden after multiple layers of easy-to-digest platitudes were not the speciality of this saintly man.

Let me say it once again: Truth is Truth and it does not tolerate the pollution with human conveniences. If one proceeds to make exceptions and distinguos in exceptional cases, the cases will soon start to become less and less exceptional as society becomes accustomed to the idea that there is a way out. See divorce. See abortion. See, well, everything. If one starts to hide this pollution with an illusory application of “the same Christian principles”, there will be no limit to the use of vaguely Christian-sounding platitudes to unhinge whatever doctrine has now become unpalatable. When one starts to make exceptions to a principle, the following generation will not even remember what the principle was.

Thankfully, the Church still stands erect in the midst of moral ruin. More proudly erect at some times than at others perhaps, but erect she stands nonetheless. About the moral ruin, surely no doubt is possible.