The “Much Needed Discussion About Vatican II” 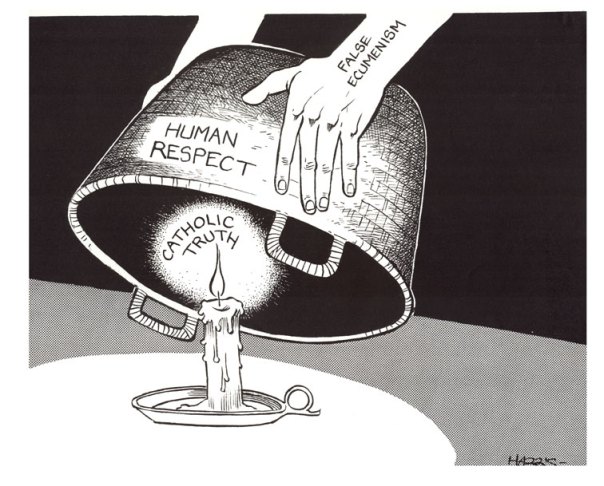 From the Blog Hospitaller, excerpts from a very interesting book.

I will first report some quotations from the book, which I suggest you read very carefully.

“The purpose of Vatican II, in fact, sets it apart from any other Council, especially Trent and Vatican I. Its scope was not to give definitions, nor was it dogmatic or linked to dogma; it was pastoral. Thus based on its specific nature it was a pastoral Council.”

.The new rite of Holy Mass practically silenced the nature of sacrifice making of it an occasion for gathering together the people of God…the eucharistic gathering was given the mere sense of sharing a meal together..

if someone were to ask me if, in the final analysis, the modernist corruption had hidden itself within the Council documents themselves, and if the Fathers themselves were more or less infected, I would have to respond both yes and no…But yes as well, because not a few pages of the conciliar documents reek of the writings and ideas of Modernism–this can be seen above all in GS.”

“Anyone who, in quoting it [VII], puts it on a par with Trent or Vatican I, and accredits to it a normative and binding force which it does not possess in itself, commits a crime and, in the final analysis, does not respect the Council itself.”

“Let me say immediately that not even a single dogmatic definition included in the intentions of LG or the other Vatican II documents. The Council–we do well not to forget this–could not have even proposed one since it had refused to follow along the lines traced out by other Councils…This means that none of its doctrines, unless ascribable to previous conciliar definitions, are infallible or unchangeable, nor are they even binding: he who denies them cannot, for this reason, be called a formal heretic.”

“[A] missionary conception of the Church now freed from any form of or temptation to proselytism…this type of ecumenism, unfortunately, found a license to legitimacy from the spirit of assisi, thanks to the ‘multi-religious’ meeting celebrated there…”

“How many times the very men, into whose hands Jesus had entrusted the sacred deposit of the Faith, solemnly and pompously said ‘no’ to this or that doctrine, like the Marian Coredemption, because otherwise it will prejudice ecumenical dialogue. It was as if to say, ‘There is no other truth or value besides ecumenical dialogue.’…”

“And if someone passed through that door to introduce into the Church a Liturgy subversive to the very nature and primary end of the Sacred Liturgy…the responsibility for this, in the final analysis, is none other than the conciliar text itself.”

[T]he Liturgy which systematically boycotted the versus Domino orientation, the sacredness of the rite, the sense of latria, the irreplaceable beauty of Gregorian chant, the solemnity of gestures and vestments, and kneeling…[was committed in a] boundless cult of man…”

“Vow! – I hear you say – Strong stuff! This must be a really angry SSPX bishop, or some sedevacantist nutcase”.

Wrong. All quotations are from Monsignor Brunero Gherardini’s “The Ecumenical Vatican Council II: A Much Needed Discussion”, translated by the Franciscans of the Immaculate from the Italian edition of March 25, 2009 and available from the “Academy of the Immaculate,” 124 North Forke, Advance, NC 27006. Ph. 1-888-906-2742.

In case you should ask, the blog informs us that Monsignor Gherardini is a Canon of St. Peter’s Basilica, a secretary for the Pontifical Academy of Theology, a professor emeritus at the Pontifical Lateran University, and the editor of Divinitas, a leading Roman theological journal. This is a man of the Vatican apparatus through and through.

I should comment now but no, I think Monsignor Gherardini said everything already.

Fatima and Sacro Vergente Anno: Pius XII’s Consecration of “The Peoples Of Russia” to the Blessed Virgin 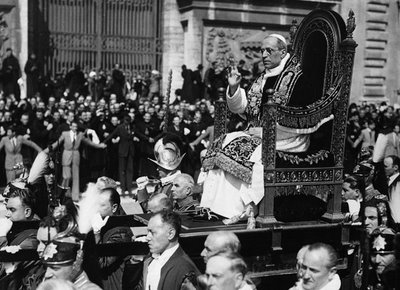 It is well-known that among the requests of the Blessed Virgin in Fatima was the consecration of Russia to Her Immaculate Heart.

Less well-known is the fact that Pope Pius XII, Pastor Angelicus, also known as “The Pope of Fatima” for his relentless support to the apparitions, did consecrate “all the peoples of Russia” to the Immaculate Heart of Mary in 1950.

I am informed that this consecration is widely believed to be somewhat short of the Blessed Virgin’s request, though in all honesty it is not clear to me why it should. It is, though, evident from Sacro Vergente Anno and from further Vatican documents that the great Pope, Venerable Pius XII, had to take care of political considerations in the way he responded to the Blessed Virgin’s request. Therefore, during the “hottest” phase of the Cold War he had limited himself to consecrate to the Blessed Virgin the peoples of all world (not wishing the potential political repercussions of a more direct action); whilst in the comparatively calmer 1952 he felt the moment come to the consecration to the Blessed Virgin of the peoples of Russia so that their freedom (and the freedom of the Church) may be achieved.

I will publish below the relevant part of Sacro Vergente Anno, in the elaborate but extremely elegant Italian in use when people had a somewhat longer attention span and could read longer sentences without becoming dizzy. Following the original text I will write a personal attempt at translation.

I am grateful to all those who will send a message with some link pointing to:

1) an official translation of Sacro Vergente Anno or at least of the relevant passage, none of which I could find.

2) the facts as to why the consecration according to the wishes of Mary is widely considered not to have been completely complied with; perhaps it could be because it was a consecration of the peoples of Russia rather than of Russia itself, though this seems rather a quaestio de lana caprina to me.

In the meantime, enjoy another spectacular example of the work of a truly spectacular Pope.

And therefore we, in order that Our and your prayers may be more easily answered, and in order to give you a special attestation of our benevolence, in the same way as a few years ago We consecrated the entire world to the immaculate Heart of the virgin Mother of God, so now, in a very special way, consecrate all peoples of Russia to the very same immaculate Heart, in the safe confidence that with the extremely powerful protection of the virgin Mary the wishes expressed by Us, by you and by every good person for a true peace for fraternal concord and due freedom for everyone and for the Church in the first place, may be answered as soon as possible; in such a manner that, through the prayer that We send up to Heaven together with you and all Christians, the reign of Christ, harbinger of salvation, which is “kingdom of truth and life, kingdom of sainthood and grace, kingdom of justice, of love and of peace”, may triumph and steadily consolidate itself everywhere on earth”