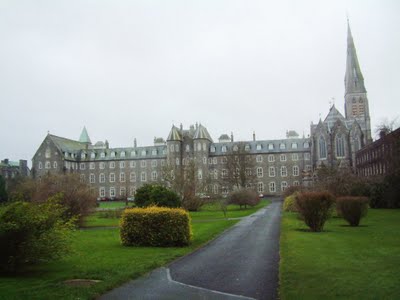 I thank Shane at Lux Occulta for this extremely useful – if extremely shocking – piece of information about what was happening at Maynooth.

This is an anonymous – You see? Anonymity is very good at times! – but very detailed report of what happened within the walls of Irish National Seminary. Whilst the beginning is shocking enough, it is followed by such a long series of abuses, outright blasphemies and clear – if not always open – rebellion to the Church that one wonders whether a seminary run by fans of Richard Dawkins would be run any worse. Unless one reflects, of course, that many of those involved must be fans of Richard Dawkins.

I would divide the problems in two big families: a) the heresy or outright blasphemy and b) the effeminacy. Picking just some of the complaints of the anonymous seminarians, they were taught the following:

1) that (and this is really, really hugely blasphemous) there is no difference in the various way of presence of Jesus in the world. Jesus be equally present in the people, in the world, in the priest and in the Eucharist.

I’ll leave this without comment. Let it sink in. This is what happens within the Church today.

2) that they do not have to kneel during consecration

This is the obvious consequence of 1). I see those idiots rather kneeling in front of a tree.

3) that the hierarchical structure of the Church is wrong.

That is, that the Church must “change”. One “facilitator” adds that he is always angry when he hears that the Church says that she will “not change” in this or that. Hey, everything changes! Obama for Pope!

4) that the absence of “female leadership” within the Church is wrong.

Nothing in the article allows to assume that such “criticism” was limited to the irreligious sisters present in the structure. This shows an astonishing degree of effeminacy within the structure, at all levels.

5) that the moral teaching of the Church is wrong.

Note that whenever dissent is mentioned by the seminarians, homosexuality always comes in the first place and this tells a lot.

6) that a “general chat” would be a good way to provide the seminarians with spiritual formation.

I think of a couple of priests I have met and yep, they must have come out from Maynooth.

7) that teaching can be based on non-Catholic texts, or on texts from catholic dissenters silenced by the Church.

Besides being utterly un-Catholic in his total disregards or rules and a systematic and structured system of values, and besides basically allowing everyone to build his own theology and moral system, this emotion-driven thinking is a clear sign of effeminacy.
If I hear a man talking about his emo-o-tions in such a way and of how they oh drive his oh actions, I know what to think and no, it’s not I being homophobic; it’s you being blind.

All this, please note, in the National Seminary of one of the most Catholic nations on the planet.

Interesting throughout the contribution is the description of the modus operandi of these people. As open dissent would lead to consequences – see St. Poelkten in Austria – the habit was to continually criticise by feigning the role of “devil’s advocate”; for example, the feminist irreligious sisters would talk of how so many women out there feel hurt and oppressed by a male dominated Vatican, & Co. Obviously, that such irreligious sisters are allowed to run the classes – and to run them in such a way – in the first place is a clear indication of the general mentality within the leadership of the structure.

The most shocking element of this report is, in my eyes, how real and credible it sounds. This is not the fantasy of some old conspiracy theorists seeing the end of the world behind every street corner. This accurately reflects experiences we have all made at some point; the innuendos and “devil’s advocate” tricks are experiences we have witnessed already; we have heard the covert blasphemy during homilies in the church, how can it be that these people do not express themselves far more strongly when there is no congregation to listen to them?

Well then, this appears to be – and the accusations are here not only very accurate, but entirely credible – the tran tran within the Seminary. It is shocking that things were allowed to come to this point in the first place. One is, sadly, reminded once again that the Vatican seems to only recur to Apostolic Visitations when things have deteriorated beyond parody, a too long period of silence or toleration of disobedience followed by a very late, but generally very heavy steamroller. I’d prefer the Vatican to act sooner, so that it may be milder.

If only half of these allegations are true – again, from the look of them I’d say they are all true – I can’t see how Maynooth can deserve to survive. The fake priests and irreligious sisters responsible for its demise and for a generalised climate of blasphemy, rebellion and effeminacy deserve to be thrown on the street.

Hey, they think that Christ is present everywhere in the world in the same way, so they’ll be fine.

Comments Off on Blasphemy, Heresy And Effeminacy In Maynooth Seminary