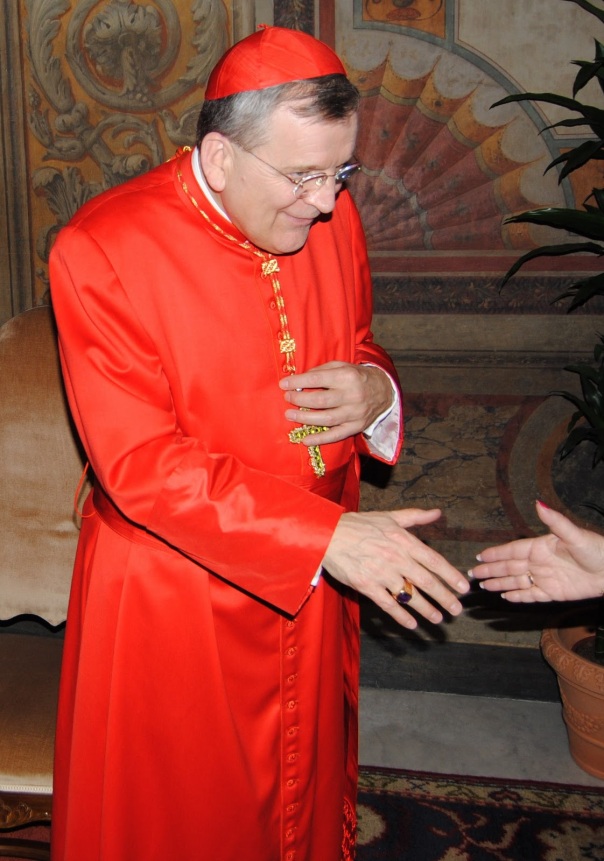 Hopefully, people like him will make us superfluous: Cardinal Burke.

Browsing around the Internet in search of reactions to Universae Ecclesiae, I was once again struck by a very clear phenomenon: the absolute, stunning, annihilating prevalence of Conservative Catholics in the blogosphere. Their dominance is now so marked, that one is not even surprised at finding one conservative blog after the other anymore; it is more so, that this is now so natural and so expected, that the chance encounter with a liberal blog would have been – if I had had such encounter – a rather shocking experience.

This reflection should make us proud (I mean with “us” not only the cohorts of bloggers, but the legions of readers who, with their contributions and encouragements, make the entire world of Catholic blogging so interesting and instructive), if it weren’t the case that our existence is, in fact, very bad news.

It is a common fact that people don’t talk much of shared ideas or common values. There are no debates about the influence of pedophilia on society, because there is nothing much to debate. Similarly, there are – after the communist madness shot itself in the genitals – no discussion anymore about whether private property be a theft, and the like. Shared values are, by and large, shared silently.

Similarly, if in the Italy of sixty years ago you would have started a debate about whether it be good to abort or to practice euthanasia, the reaction would have been a non-discussion for the evident unworthiness of the proposer, it being generally understood and universally accepted that legalised abortion and euthanasia were a distinctive trait of the Nazi regime, and such things unthinkable in a Christian and halfway decent society.

And this is the entire point. Western societies have become so indecent, so accepting of typical Nazi values, that what two generations ago would have caused open mockery or ironic commiseration, nowadays causes savage discussions. The same goes for Catholic issues, with your typical aunt of, say, 1942 smilingly dismissing as in great need of rest whoever would have told her that two generations later, millions of words would have been written about the necessity of …….. kneeling before Communion.

Our very existence is, therefore, bad news, because our existence is the clear result of the most elementary common sense having been thrown to the dogs by the senseless pot-generation of the Sixties; a generation still spreading its poison in the form of senior clergymen and senior politicians, roaming throughout the world and seeking the ruin of souls to this very day.

As it is now, hundreds of millions of Catholics can’t remember the last time their bishop has said anything meaningful against abortion or divorce; they can’t, actually, not remember when their bishop has said anything meaningful at all, vague blathering about social justice and environ-mental issues obviously not qualifying. It’s not surprising that such faithful spend part of their evening reading Catholic blogs.

If, on the other hand, the bishops were firing daily from all cannons against modern abominations and the desertion of Christian values, Catholics wouldn’t be here in the evening reading what other Catholics think; you yourself, dear reader, would just be doing something else, needing this blog no more than you need to be informed about pedophilia, or incest, or “proletarian expropriations”. Shared values are taken for granted, and one feels comfortable in the very fact that they are no object for discussion (think about a world where vast masses think that pedophilia is all right: appalling, right?).

The day the Catholic clergy starts doing its job properly and assertively, Catholic blogging will stop being a phenomenon so vast as to even attract the attention of the Vatican. That day, million of fathers and husbands will start dedicating more time to their wives or domestic occupation and less to following endless discussion on the Internet. That day, Catholic blogging will become a far more subdued activity, because the nourishment and instruction the reader seek on the net is just there, available and propagated from the friendly priest near them, as it should have been all the time.

Let us hope that Universae Ecclesiae will grow to become an important step toward the end of the massive phenomenon called “Catholic blogging”.