The Feast Of Corpus Domini

The feast of  Corpus Domini (officially in English Speaking countries the “Solemnity of the Most Holy Body And Blood Of The Lord”) is a traditional Catholic solemnity instituted to celebrate the Real Presence consecrated in the Eucharist and celebrated on the Thursday after Trinity Sunday, that is: tomorrow. Corpus Domini is simply the Latin for “Lord’s Body”.

The origin of the feast lies in the vision of an Augustinian Nun, Juliana of Liege. This nun had always had a special veneration for the Blessed Sacrament, desiring to be in His presence for as long as possible.  According to Wikipedia:

This desire is said to have been increased by a vision of the Church under the appearance of the full moon having one dark spot, which signified the absence of such a solemnity. In 1208 she reported her first vision of Christ in which she was instructed to plead for the institution of the feast of Corpus Christi. The vision was repeated for the next 20 years but she kept it a secret. When she eventually relayed it to her confessor, he relayed it to the bishop. Juliana also petitioned the learned Dominican Hugh of St-Cher, Jacques Pantaléon (Archdeacon of Liège who later became Pope Urban IV) and Robert de Thorete, Bishop of Liège. At that time bishops could order feasts in their dioceses, so in 1246 Bishop Robert convened a synod and ordered a celebration of Corpus Christi to be held each year thereafter.

It is interesting to note that when the Church made of this a universal feast, St. Thomas Aquinas composed an ad hoc hymn, the Pange Lingua, which became one of the most famous hymns of the Church. The last two verses of the hymn gave origin to another famous hymn, the Tantum Ergo.

There is no doubt that this feast reached a high degree of popular participation in the centuries before the Heresies of Luther & Co., as proved by the lengthy controversy in Florence about whether the Corpus Domini procession should start from the newly erected Cathedral of Santa Maria del Fiore, or rather from its traditional location of the Dominican church of Santa Maria Novella. We also know that when the heresy of Calvin started to spread, particular caution had to be exercised to ensure adequate protection for the Precious Body, traditionally led in procession in a monstrance and now at risk of desecration through the heretical mob.

I also read several years ago in Germany – and have no ground to doubt – that this feast received additional impulse during the Counter-reformation, as the fact that the feast so obviously stresses the Real Presence and the miracle of Consecration made it very apt to be used as a vehicle of sound Catholic doctrine amidst the heretical impulses of those times.

The feast is not a holy day of obligation in the United Kingdom and has been moved to the following Sunday. Still, it would be good to try to go to Mass tomorrow if you can, or at least to find some time to stay in the presence of the Corpus Domini on the day of this beautiful, so intrinsically Catholic feast.

Comments Off on The Feast Of Corpus Domini 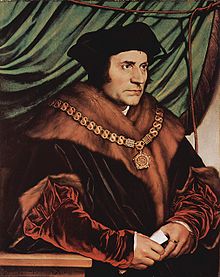 On June 22nd the Church remembers St. Thomas More, a martyr of the faith.
Thomas More is particularly relevant to our time because besides being a scholar, philosopher and author he was a highly successful and influential politician. Born in a wealthy family, he rose to the top of the English political establishment through intelligence, competence and honesty. These virtues were also what put a premature end to his life, as he preferred to die on the scaffold rather than compromise his allegiance to Jesus and His Church.

Let us reflect on this: he who had become the most powerful man in King Henry’s government, respected and privileged, wealthy to the point of having his own zoo, freely chooses to die rather than adjust his beliefs to the political climate of the times. Granted, he had always been an extremely religious person – and had played with the idea of monastic life in his youth – and the writer does not suggest that heroic virtue to the point of self-sacrifice be taken as the ordinary standard of a politician.

Still, people like Thomas More (and Bishop John Fisher, put to death for the same reason and canonised together with him) are a sober reminder of the scale of betrayal of Christian values daily perpetrated by people like Nancy Pelosi, Joe Biden and the multitude of other politicians calling themselves Catholic whilst trampling upon everything Catholicism represents.

Thomas More is the more relevant today, because today’s politicians are the more distant from His probity and courage. He puts the Pelosis and Bidens of this world to great and greatly deserved shame.