Divorce: How Niceness Took The Place of Common Sense 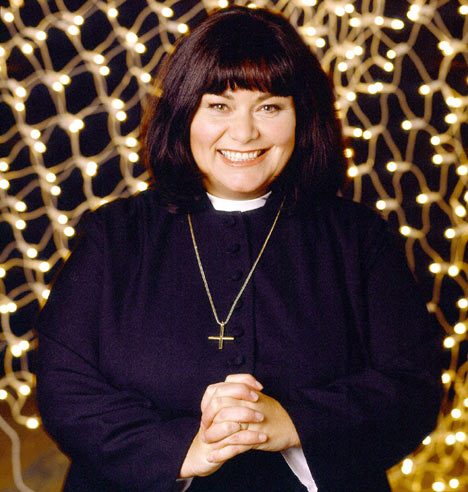 Moral values in todays' Britain: the "Vicar of Dibley".

It is highly ironical that basic tenets of Catholic thinking (besides the Church being……. the only Church, She is the country’s second largest Christian organisation after the largely atheists or indifferent Anglicans, and the largest if you consider the number of churchgoers) need the endorsement of a senior judge to make some headlines.

The judge in question is Sir Paul Coleridge talking to the BBC, which reports the conversation as follows:

On the day official figures showed that nearly half of all babies are now born to unmarried mothers, Sir Paul blamed family break-up on social changes including the shift in attitudes towards cohabitation and increasing numbers of children born outside marriage.

He said that 50 years ago ‘on the whole cohabitation was regarded as something you didn’t do, to have a child outside marriage, so that created a framework that stopped very much breakdown.

‘We’ve had a cultural revolution in sexual morality and sexual behaviour,’ the judge said. ‘We need to have a reasonable debate about it and decide what needs to be done – and I don’t mean Government,’ he said. ‘They didn’t cause the problem.’

He added that the change in social attitudes over the past five decades had given people ‘complete freedom of choice’.

This was ‘great’ when they behaved responsibly, he added, but some seemed to think it was a ‘free-for-all’. Sir Paul said the rate of family breakdown among unmarried couples was far higher than among married ones.

It was statistically proven parents were far more likely to stay together until their children’s 16th birthday if they were married, he said.

Official figures suggest that an average marriage lasts around 11 years, but a cohabitation is likely to break up in three if the partners do not marry.

One would give kudos to the judge – a good chap, probably – if what he says were not the most elementary, purest common sense. And in fact the very same fact that his words made headlines shows a typical trait of today’s Britain: the loss of basic common sense.

I personally see as the cause of this a typically English disease, that has been worsening and spreading like a metastasis as the religious sense disintegrated: niceness.

Niceness has slowly become the unique moral criterium, the be-all and end-all of all moral considerations, the golden calf of a new religion. Nice, good. Not nice, bad. The idea that there be values to which niceness might be sacrificed has – encouraged by the “church” of England – all but disappeared. When values disappear from the pulpits, don’t expect to find them much longer in the sitting rooms of the pewsitters. When the “church” of England eliminated Christianity from morality, niceness took its place.

Still, a society in which everyone wants to be nice to everyone is condemned to doom. As divorce became more and more frequent, no one dared to say a word about that as this just wasn’t “nice” towards those among our acquaintances that were in that situation, or knew someone who was. If “nice” is the moral criterium, you have lost your argument – and every hope of avoiding that the country goes down the drain – the very instant someone says he’s “hurt”. Welcome to Nice Britain.

It went on, as more and more couples started to live together in concubinage and no one said a word, least of all the oh so nice vicar (and, all too often, the still-too-nice priest). The country was all too happy with its “Vicars of Dibley”, and didn’t care about the consequences as long as it was convenient to do so.

This obviously led to more and more births of children born outside of wedlock, born from people who were either adolescents or were remained such, the illusory quest for a never-to-be-reached personal happiness more and more frequently put before their own children. Those who went around saying that marriage is only a piece of paper were those who were most prone to leave their partner and children; but to say that was, of course, not nice.

The stigma also went. Being divorced is something, if not almost expected, clearly within the realm of normality. The very idea that there should be a stigma associated with being divorced is considered something bad because, erm, not nice. Strangely, I grew up in a country which – covertly or overtly – used to send the message that if you are separated/divorced, you are a failure irrespective of whatever other achievement you may have, because you have failed in the most important endeavour of your life. How “rude”! How “judgmental”! But you see, in such an environment you think twice before you marry, and thrice before you divorce. Of course there is social pressure: it is because it is good!

The entire “niceness” madness is perfectly epitomised by our Prime Minster, “Call-me-Dave”-Cameron; the friend of everyone, the supporter of every idea and its contrary, the man called “chameleon” even before seriously starting to be a politician, the prostitute of every lobby, and the undoubtedly brownest nose of the Kingdom. Cameron is the kind of person able to say that he is in favour of marriage, and that “marriage” includes homosexual couples. This doesn’t scandalise much. You see, he is being nice.

This is where we are now: a country where marriage is defended with words, without saying that to defend marriage means to condemn alternative forms of convivence; a country where it is recognised that a child needs stability, but its destruction is never stigmatised; a country where there is a lot of talk about values, without ever saying what behaviours these values necessarily exclude.

The country drowns in niceness; starting from the vicar down the road, and the local politician.

It drowns to such an extent, that common sense makes headlines.