In this rare photo, Agents Crockett and Tubbs upset at learning the news.

This is bad news, and good news at the same time. Bad news, because a shameless behaviour went on unchecked for too long. Good news, because the scandal is out after it is clear that decisive steps have been undertaken to clear up the pig stall (and the pig stall was, apparently, of impressive proportions, and the stink mighty).

It would appear that in the diocese of Miami a group of actively homosexual bishop and priests called the shots in the way you can imagine; bullying of those dissenting; favour for those willing to “favour” the bishop and his friend; toleration of live-in “boyfriends”; alcoholism;  all sorts of sexual license; embezzlement of diocesan money to pay for expensive restaurants; even a commercial enterprise producing an exciting beverage meant to give young people “the best sex they ever had”, or the like, with the bishop himself having a financial interest in the operation.

It would also appear that things went so far, and so public, that a group of angry Catholics took the time and pain to write an extremely detailed, 400-page report to Rome, which led to the defenestration of the bishop John Favalora (I will resist the temptation of telling you what fava also means in Italian; let us say that in this case, it applies well to Favalora’s head), his substitution with an orthodox chap and the above-mentioned cleaning of the pig-stall now apparently well on its way.

Good news all around, then. Well, not really. How can it be possible that an entire diocese falls prey of a homo mafia and no one seems to notice much until the local Catholics get really angry? Come on, folks: is it possible that no rumour comes to the ear of other bishops and other functionaries, and from there to the nuncio? How is it possible to arrive to such extremes of depravity without the matter becoming the subject of the usual whispers and rumours, hints and allegations? We are not talking of clearly secret cases of child abuses here; we are talking of a behaviour that must have been noticed by the clergy as it has been noticed by the laity. How can it be that a group of rightly angered Catholics writes a 400-pages report without first trying to address things in a different way within the US (bishop’s conference’s relevant office, say; apostolic nuncio, say)? Isn’t it reasonable to suppose that steps were undertaken before writing the report, and they haven’t achieved anything? And how is it possible that what was plain to see for the people outside, was fully unknown to the people inside the US clerical apparatus?

Now 109 of the 400 pages are in the hands of “Gawker”, a rather vulgar, secular gossip magazine whose direct link I am not going to publish, but the page I linked to has the link for those willing to deepen the matter. The behaviour described therein would let your blood freeze it it had been put in place in, say, a commercial enterprise; but it becomes outright scary if you think that it all happened in a big diocese of the Catholic Church.

One can’t escape the uncomfortable though that even after so many scandals, the old habit of the full-time wearing of earplugs and blinkers doesn’t want to die; and one must at this point wonder whether other similar situations exist, whose only difference is that in their case there is no group of admirably organised Catholics like we had – thankfully – in Miami.

Comments Off on “Miami Vice”

CNA has a story about Dan Avila, an advisor to the US Bishop, calling Catholics to arms with words whose clarity can only be lauded.

“We just can’t simply sit back. Every Catholic and every Catholic institution concerned about marriage and the family will need to be able to step forward and advocate for the Defense of Marriage Act as federal policy,”

“Even if there’s no immediate prospect for this bill to race through Congress, the fact is that the pressure is building and the case is being made for the eventual demise of DOMA. All those concerned about the preservation of marriage simply need to pay attention, stay tuned, and be ready to respond.”

“Marriage is the keystone of the common good. When you erase from a policy on marriage any reference to sexual difference, you will force the government to ignore and to be indifferent to the absence of either the man or the woman in the most fundamental relationship that we know of.”

“I would daresay that Congressman Nadler and others who are advocating the repeal of DOMA are not also advocating for the repeal of the requirement that be limited to people,” he said. Many who argue for same-sex marriage have taken positions against recognizing group marriage, even as polygamists have filed suit charging that polygamy bans are discriminatory.

One can’t say for sure that the US Bishop will respond to this call to arm with half the energy it would require; but one thing seems clear to me: this issue is going to stay with us, and it will grow in public awareness as 2012 approaches. By supporting the (hoped for) move to repeal the DOMA, Adolf Hussein Obama has taken sides and he will have to live with the consequences.

It surprises me that Adolf Hussein would choose the side that has lost 31 times out of 31, but this is such a self-deluded child president that one should never be too surprised at seeing him, once again, piddle out of the potty-chair without even noticing the puddle.

I do hope he’ll have more of these brilliant initiatives in the months to come. More liberal, more socialist, more populist, more “change”, more Obama.

Mexican Bishop In Trouble About Homos 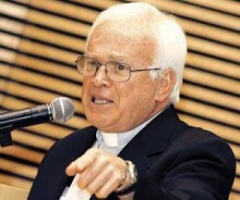 The CNA reports that Bishop Raul Vera Lopez of Saltillo, Mexico has put himself in a bit of a trouble for his – and his priests’ – relaxed attitude towards Sodomy. CNA now confirms that he has declared to the press that he has “received some questions” from the Vatican, which certainly doesn’t bode well for his chances of having a tranquil autumn.

From what I can read from the CNA press release, Bishop Vera seems one of the rather strange ones. He accuses a Catholic press agency (ACI Prensa, the Spanish-language version of the CNA; which latter yours truly knows as rather factual and not inclined to fight ideological fights against anyone, much less bishops) of having published “outrageous things” that misrepresent his thinking and let him appear at odd with Church teaching; but then he goes on to say that they do it because…

“they are driven by prejudice and phobias against the homosexual community….”

hhhmmm….is this bishop’s talk? Am I sitting in front of the wrong cinema screen? Call me a cynic, but whenever I hear someone accusing someone else of being “homophobic”, I know that heresy is not far away.. How can a press agency, of all things, be driven by such phobias? And a Catholic one, at that? Methinks, they are just being (charitably) Christian? And who are in most cases those who accuse others – and the Church, with great pleasure – of being “homophobic”, but the friends of sodomy and the enemies of the Church?

The bishop’s utterances appear, therefore, already suspect. It is as if yours truly would be accused of being, say, anti-semitic and would reply by saying “ACI Prensa has misrepresented my thinking about the Jews; and they do it because they are clearly linked with the Jewish plutocracy”. Not very credible, is it now?

The CNA describes the controversial activities of bishop Vera as follows:

In March of this year, Bishop Vera published a statement on the diocesan website expressing support for the “sexual, family and religious diversity forum.” The event was aimed at “eradicating what some sectors of the Church believe about homosexuality” — especially the belief “that homosexual actions are contrary to God.”

This is, if confirmed, rather strong tobacco as a bishop – or a diocesan site – expressing “support for sexual diversity” is not unlikely to get the “Golden Sodomite” Prize for the current year; the more so when it is maintained that homosexual actions be not contrary to God. Strange god, this one; perhaps they are confusing with Baal.

Even stranger it becomes when one reflects – as, again, the CNA reports – that the bishop has expressed his opinions in the frame of the continuing support for an organisation called San Elredo community, founded by an American (still) priest called Father Robert Coogan.

This chap has managed, in a remarkable feat, to maintain that his group is not in opposition to Church teaching and at the same time to be on record with the following words:

“How can a person with same-sex attraction have a fulfilling life? And the only answer the Catechism gives is to tell them to be celibate, and that is not enough.”

Now this is very, very colourful (there can be no fulfilling life without sexual satisfaction; that’s a new one from a priest, and says rather a lot about Father Coogan’s own habits) as the ability of claiming to be orthodox whilst screaming around that one isn’t is not given to everyone.

Father Coogan’s and bishop Vera’s logic seem to be remarkably aligned, though; which is probably why they seem to get along so well.

We’ll see how this pans out. It can be – I mean, in theory there’s always a lot that “can be” – that ACI Prensa truly has misunderstood the poor bishop; that the remarks about them being “homophobic” is not authentic; and that when Father Coogan says that celibacy is not enough, he means that homosexuals must pray a lot. Which would be strange, because the Catechism says that, too.

Again, we’ll see how this develops. In the meantime, it is nice to notice that in Rome they have directed their attention towards Mexico.