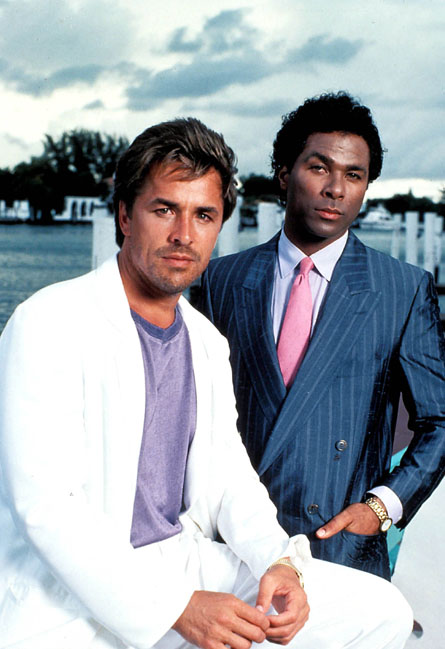 In this rare photo, Agents Crockett and Tubbs upset at learning the news.

This is bad news, and good news at the same time. Bad news, because a shameless behaviour went on unchecked for too long. Good news, because the scandal is out after it is clear that decisive steps have been undertaken to clear up the pig stall (and the pig stall was, apparently, of impressive proportions, and the stink mighty).

It would appear that in the diocese of Miami a group of actively homosexual bishop and priests called the shots in the way you can imagine; bullying of those dissenting; favour for those willing to “favour” the bishop and his friend; toleration of live-in “boyfriends”; alcoholism;  all sorts of sexual license; embezzlement of diocesan money to pay for expensive restaurants; even a commercial enterprise producing an exciting beverage meant to give young people “the best sex they ever had”, or the like, with the bishop himself having a financial interest in the operation.

It would also appear that things went so far, and so public, that a group of angry Catholics took the time and pain to write an extremely detailed, 400-page report to Rome, which led to the defenestration of the bishop John Favalora (I will resist the temptation of telling you what fava also means in Italian; let us say that in this case, it applies well to Favalora’s head), his substitution with an orthodox chap and the above-mentioned cleaning of the pig-stall now apparently well on its way.

Good news all around, then. Well, not really. How can it be possible that an entire diocese falls prey of a homo mafia and no one seems to notice much until the local Catholics get really angry? Come on, folks: is it possible that no rumour comes to the ear of other bishops and other functionaries, and from there to the nuncio? How is it possible to arrive to such extremes of depravity without the matter becoming the subject of the usual whispers and rumours, hints and allegations? We are not talking of clearly secret cases of child abuses here; we are talking of a behaviour that must have been noticed by the clergy as it has been noticed by the laity. How can it be that a group of rightly angered Catholics writes a 400-pages report without first trying to address things in a different way within the US (bishop’s conference’s relevant office, say; apostolic nuncio, say)? Isn’t it reasonable to suppose that steps were undertaken before writing the report, and they haven’t achieved anything? And how is it possible that what was plain to see for the people outside, was fully unknown to the people inside the US clerical apparatus?

Now 109 of the 400 pages are in the hands of “Gawker”, a rather vulgar, secular gossip magazine whose direct link I am not going to publish, but the page I linked to has the link for those willing to deepen the matter. The behaviour described therein would let your blood freeze it it had been put in place in, say, a commercial enterprise; but it becomes outright scary if you think that it all happened in a big diocese of the Catholic Church.

One can’t escape the uncomfortable though that even after so many scandals, the old habit of the full-time wearing of earplugs and blinkers doesn’t want to die; and one must at this point wonder whether other similar situations exist, whose only difference is that in their case there is no group of admirably organised Catholics like we had – thankfully – in Miami.