In order to make your holiday season more pleasant, some light remark about the strange happenings among “progressive” sisters. Hat tip to “Messa in Latino” for the blog post.

We can see below two example of nuns’ creativity. The first is the arrangement prepared by the nuns of St. Joseph in Cuneo (alas, Italy). 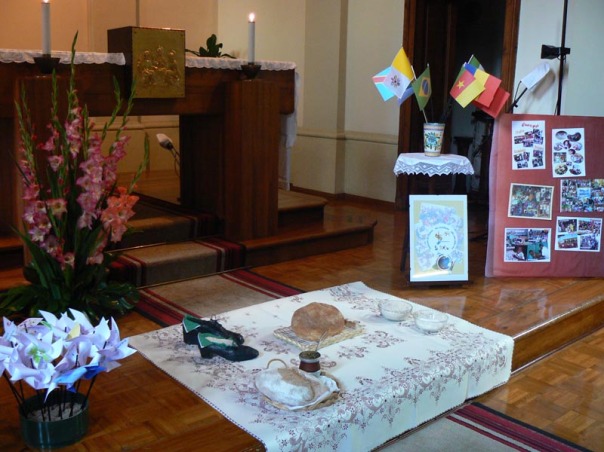 We have not one, but two loaves of breads, strangely on the floor. I am assuming that here the intrepid nuns are not suggesting to the celebrant to use the loaves for the consecration; it seems to me rather more probable that at some time during of after the ceremony the good nuns will divide the bread among them, thus feeling oohhh sooooo emotionally linked to the Last Supper, and at the same time tragically downplaying the Holy Communion. It would be like saying “If we can’t consecrate the Host, at least we’ll parrot Jesus by breaking it and giving it around”.  But this is only, mind, an attempt of mine to explain why nuns should leave loaves of bread on the floor, which requires some exertion.

Even less explicable is why there should be, in near proximity to the bread, women’s shoes. Perhaps the ladies want to remind us of the feeeeminine paaaaart of creaaaaation, though they only succeeded in reminding me of the level human stupidity can reach. My fault, no doubt. The rest of the photos is rather more predictable: the many flags are probably there to remind the priest of “world peaaaaace” (without which reminder, of course, no Mass would deserve the name) and the photos remind one of a kindergarten, or elementary school.

Which, actually, explains everything.

The second photo is even less amusing:

We are in Argentina. A nun (we are told that she is one; she is not dressed like one, though) is taking her vows. Around her strange things are happening, with a multitude of people (some of them might be nuns; but we don’t know, because they don’t dress like ones)  actually imposing hands on the lady and in this way clearly parroting the real imposition made from the (unseen) priest; one doesn’t need to be a genius in order to understand that the real and fake imposition very probably happen at the same time.

This is, how should I put it, not so funny. It gives the idea that the validity of the lady’s vows (provided she is really becoming a nun; which we don’t know, because she doesn’t dress like one) depends from the imposition of the hands by the community.

The chap in jeans further underscores the solemnity of the moment. You can say what you like, but these “trendies” do know how to make pomp.

I wish the lady in question all the best, but frankly the start couldn’t have been worse. As the Italians say, “If the good day is seen from the morning…”

Comments Off on Nuns’ “Liturgic” creativity