From Messa In Latino, a beautiful example of liberal tolerance and acceptance of diversity.

In Caltanissetta (Sicily), a priest decides that one either receives on the tongue, or he doesn’t receive at all. Is he allowed to do so according to Canon Law? I don’t know, and frankly I doubt.

What I do not doubt, though, is that one of the liberal non-communicants went to the sacristy after Mass and started to insult the poor priest with such violence that other people, forcibly hearing the scene, called the Carabinieri.

Dr. Schuller has been a key figure both in Orange County and around the globe for many years; I wish Crystal Cathedral Ministries success with their reorganized finances.

Crystal Cathedral To The Orange Diocese

The Miracle of Consecration should happen here. Geniuses.

Sad news, and actually such that I hoped I would never write. The Diocese of Orange won the bidding war with the Chapman University.

It would therefore appear that this monument to Protestant grandeur – not ugly in itself, but in my eyes unworthy as a place of Catholic worship – will become the next Cathedral of the Orange diocese.

The changes necessary have been described as follows:

The liturgist for the Orange diocese, Monsignor Arthur Holquin, said July 26 that several changes will need to take place in order for the Crystal Cathedral to become a Catholic worship space.

Along with a central altar, a tabernacle and a baptismal font, the building would need a “cathedra” or bishop’s chair. While renovations are needed to the building, “not much deconstruction would be required and the iconic personality of the original architecture and design would, for the most part, be retained,” he said.

The entire exercise stinks to this Catholic nose of ecumenism from the window. It is as if the building was supposed to remain as Protestant as possible, perhaps thinking that this would attract Proddies, rather than motivate Catholics to worship elsewhere.

This “Tod Mahal” might never be converted to a Catholic cathedral if the Holy Father sends the right person to substitute the departing – and good riddance – Tod Brown. I can easily imagine that if the right person is chosen, the pressure will mount to change plans and sell the real estate, perhaps even at a profit. In the end, the structure was sold rather fast, and with a marketing time of 12-24 months it should be possible to undo the damage and avert the danger. Still there is time, as the Protestant congregation so fond of “possibility thinking” receives the possibility of staying in the structure for up to three years.

When the next bishop comes, I hope the local Catholics will start their own “possibility thinking” exercise themselves.

Obama Is A Homophobic Hater

I thought he'd think this "cute"?

The disgusting picture you see above is one of the photoshopped images used by Benetton, the crap sellers, to try to help a declining brand to escape oblivion with some “cool” scandal, like for example openly approving faggotry.

You would think that such disgusting exercise would be very pleasing to the liberal minds, never tired to stress out how “homophobic prejudice” continues to penalise countless ohh so sensitive perverts and make them a target for homophobic persecution or, to use a fashionable word, “bullying”. Who then, you certainly reason, should be more happy to be represented in such a “diverse” posture than the New Messiah, the Herald of Change, and enthusiastic supporter – as much as his role allows him to; at least until after the election – of so-called “gay rights”, Adolf Hussein Obama?

Isn’t it so, that an enthusiastic approval of the picture would earn him the immediate approval of all the “liberal minds” – even the heterosexual ones – of the United States? Isn’t it so, that with the economy set not to improve rapidly and a deficit to let the Italians look thrifty, Obama needs all the support he can get from those oh so mistreated minorities who see in him a beacon of hope and social – again – “change”? Can it be denied that a liberal mind like Obama cannot, cannot see anything wrong in a homosexual kiss, even if he happens to be straight? Aren’t liberal not all faggots at heart, and be it only in their own peculiar, oily, hypocritical “I would so like to be a faggot to know how it feels to be persecuted”-way?

Wrong, my friend. The White House is not amused. Not amused at all. Obviously they don’t say that dear Minority President doesn’t want to be identified, in any way whatsoever, with that minority; liberals have high standards of hypocrisy that must be maintained at all times. No, what they say is that they resent the use of the President for “commercial reasons”. Interesting. I seem to remember Nixon with the Coca-Cola bottle. Besides, the subject of the campaign is, in change-English, “unhate”. How can it be that the President of the United States overlooks the humanitarian sense of the campaign, to focus exclusively on the vile commercial interests, like a Republican would? What kind of mindset is this? What has happened to the promised “change”? Was the same virulent reaction caused by the (now passed) phenomenon of Barackvertising?

Take it from me: the President of the United States acts the liberal, but in reality he is a homophobic closet conservative.

Or, as they say in Italy, “everyone can be a homosexual with other people’s backside”…

P.s. one is curious about the reaction of the Chinese… should be fun for Benetton’s Chinese sales prospects…

Comments Off on Obama Is A Homophobic Hater 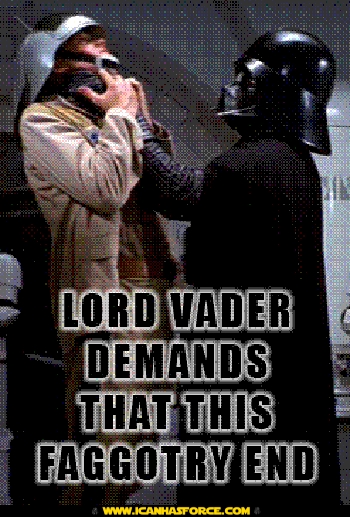 First of all, Benetton produced in my time expensive, overpriced crap and I do not think anything has changed in the meantime; rather, I am surprised they are still around as a company.

But this is not the matter; the matter is that in their most recent campaign called “unhate” – from their grammar you’ll recognise them – they dare to publish a photoshopped image of the Pope, and have other not-so-funny pics; for example the one with Obama kissing Chinese commie leader Hu Jintao like a benetton-wearing homo, though we know that faggotry is probably the only shortcoming Obama doesn’t have.

These photos are obviously anti-Catholic and Anti-Christian in that they not only make a mockery of the Pope – the photo has in the meantime been withdrawn, but only because the Vatican threatened to sue -, but through the union of the “unhate” (see above) message with homosexual obscenities send a perfectly anti-Christian message, that it be someway cool to be a homo, and even to show it in public to other Benetton wearing fags.