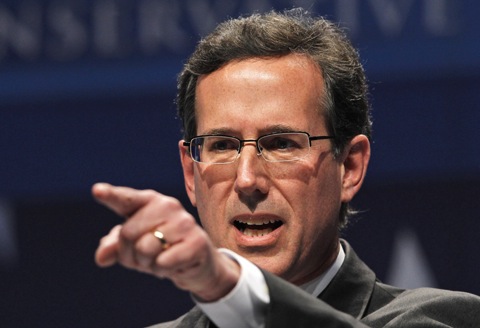 The Hero of the day: Rick Santorum

I am sitting at home, trying to digest the Iowa results.

What has happened is, to put it bluntly, huge. Those non-Americans among us who have followed Santorum since last summer knew (erm, thought to know) that his was a pure flag candidature, very useful to give more relevance to pro-life issues but without any chance at all to make it to the nomination in real life.

I would be very naive if I would tell you that I have changed my mind now. If the past is any guidance, Santorum will be drowned in the next couple of weeks by the Romney war machine – no doubt, covertly attacking him as they did with Gingrich; it is very interesting how the PACs can be used to outsource nastiness; I think Gingrich will learn the lesson too … – and by the growing awareness that he is, however you try to twist and turn it,  not a mainstream candidate. More likely than not, he will be the Huckabee of Iowa 2012. Still huge of course, but not a nomination.

Still, what happened in Iowa shows in my eyes the great force of social conservatism in America, a force we in Europe can only dream about. All those Evangelicals endorsing, of all men, an extremely orthodox Catholic show the ability to coagulate around a man – not this time, most certainly; but probably in future – able to openly defend pro-life and social conservative values and to lead his agenda to Republican nomination and eventual electoral victory.

Perhaps yesterday’s caucus, and the events that will follow until Santorum abandons, will be remembered in the years to come as the equivalent of Ronald Reagan’s “time for choosing” speech(es): as the phase in which he puts himself in front of a national audience as a valid candidate to incarnate serious, solid conservative values for an entire country, not for a minority of hardliners.

I still can’t imagine this will be Santorum’s nomination year. It’s not that I wouldn’t dream of it or that I enjoy defeatism, merely that I do not want my excitement to eclipse common sense. It’s still a very long shot, though the shot has just become a damn good sight shorter. What seems more probable to me is that Santorum has put himself in an excellent position to be a serious candidate in four or eight – or twelve – years’ time, when the pro-life and anti-perversion issued will have had some years to better penetrate the collective consciousness of the American electorate, and a couple of million pot-smokers and Sixty-Eighters will have gone to meet – or not, as the case may be – their Maker.

Yesterday, Santorum and his troop of fighters have made that moment a good sight nearer to us.