← Priests As God Intended
Queen Elisabeth I and Liberal Catholics → 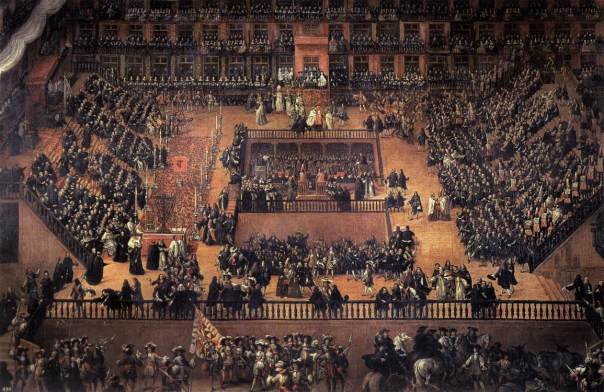 It has become something of a commonplace to shoot at the Church of the past. Thanks in part to a tireless anti-Catholic propaganda, in part to the softly-softly clergy of the post-V II, too often eager to agree with the critics, and in part to the slowly apocalyptic proportion of modern times’ ignorance (once upon a time peasants knew they were ignorant; nowadays every semi-illiterate cretin can write a blog), the past centuries have been portrayed as the theater of unforgivable, never to be repeated, shameless Church behaviour  from which every intelligent creature should distance himself as a matter of course. Well, I disagree.

Firstly, there is no doubt in my mind those were more Christian times than ours, as the centuries of the Crusades and the Holy Inquisition had individual salvation at the forefront of societal organisation. Now, if you are a Christian you cannot avoid admitting that medical advancement, beautiful cars and smart Ipods are a jolly good thing, but the most important thing in life is to be saved. If this is true, it follows that the most important metre of how a society organises its affairs does not lie in the matter of how clean its hospitals are, but in the way it helps its own members to pave their own way to salvation. It follows that, if we look at what really matters, those societies were vastly more advanced than our own.  If you disagree with this statement (which you will, if you think with the mainstream mentality) you will have to admit salvation is not the most important thing to you, but rather other values like, say, democracy, social equality, economic progress, freedom of opinion, etc.

Make no mistake, I am not saying all these things are not important. What I am saying is that they all pale compared to Salvation, and whilst modern Western societies are very good at helping one to achieve these secondary values, they are abysmally bad at helping one to provide what is infinitely most important than everything, absolutely everything else in his life.

Secondly, it seems to me rather obvious that, say, Spain in the sixteenth century was a vastly more just society than every Western country you care to mention. True, corruption and abuse were widespread; true, economic resources were not optimally used, and inequality was certainly rampant. But you see, in XVI century’s Spain your probability of being aborted were rather low,  whereas as a child in the womb of a black girl in, say, XXI century’ England your cards look rather bad. Which society is worse, the one caring you are born in a world of inequalities, of the one where you have a rather high probability of not being born in the first place? Modern societies tolerate genocide on a scale never known in the history of humanity, and dare to criticise the comparably rare occurrence of the autodafe’, and the Sacred Inquisition. Talk about blindness.

Thirdly,  many of the institutions of those times are – due to sheer ignorance – seen and judged with the metre of modern times, which makes the entire construct absurd. It is true there were trials for heresy, but everyone knew that; it is true if the religious authorities condemned someone for heresy, the civil authorities of the land would send him to the scaffold of the stake, but everyone knew that too. The rules of the game were rather clear, and you ran zero risk of being just supposed a heretic and burn at the stake  because the mob needed some strong entertainment. Note also the Church had by far the fairest trials the contemporary societies could offer, and you were in infinitely safer hands if tried for heresy than, say, for murder. You can visit one of those rather graphic museums in Europe to persuade yourself of this very rapidly.  Or you can go to the Tower of London and read the reports of Guy Fawkes’ “interrogation” to persuade you of this.

Before some genius  posts some comment stating I wish the return of XVI century’s Spain, let me say that I do not believe in the least the past was an ideal time, where everything was fine and peace and justice reigned. What amazes me is the attitude of people who condone the endless slaughter of children all over the West, but can’t avoid trying to look intellectual or tolerant mentioning the Inquisition as soon as you tell them you’re Catholic. If you dig a bit you might discover they are in favour of abortion but hey, they like PETA a lot. Fools.

There is a blindness in this that, if anything, only a huge dose of ignorance can excuse.

Posted on April 9, 2012, in Catholicism. Bookmark the permalink. 4 Comments.