An interesting fruit of the battle about HHS mandate is the fact it forces the Church in the US to progressively clean herself from the influences of a not-so-glorious past; but in doing so, she runs the risk of her message not being properly understood, or being altogether wrong.

The issue here is religious liberty. There is no doubt in the US:

a) there has historically been a great measure of religious liberty, and

b) this religious liberty is now endangered by the HHS mandate and the Obama troops.

It seems wrong to me to deny that, from the factual point of view, religious liberty has served the Church in the US well. A country originally colonised by hard-line Protestants now has some 70 million Catholics, and I doubt this would have been the case if religious liberty had not been – though nothing is perfect on this earth – a distinctive trait of American society.

Up to here, I think we all agree, even the SSPX: what American faithful now have (=religious liberty)  is worth fighting for, because what will happen otherwise is a country where Christianity – and most directly, Catholicism – is discriminated against or even, in extreme cases, forced to go underground.

Where the problems begins is – as the SSPX rightly observed – when the US Church interprets religious freedom as something intrinsically right, or intrinsically Catholic. This is very V II, and very wrong. Read these words:

From well before Cardinal Gibbons, Catholics in America have been advocates for religious liberty, and the landmark teaching of the Second Vatican Council on religious liberty was influenced by the American experience. It is among the proudest boasts of the Church on these shores. We have been staunch defenders of religious liberty in the past. We have a solemn duty to discharge that duty today.

As the Gipper would say, “there you go again”. Again the usual V II soup, and again the defence of an error as the result of the “American experience”.

Far more to the points are the words of the SSPX:

Certainly we must fight for the liberty of the Catholic Church – that is, the ability for her to fulfill her divine mission to save souls, promote the faith (particularly in society) and enact the corporal acts of mercy. However, this is a much different thing than defending religious liberty, a false notion that originated with the Protestants and condemned as an error under the generic title of “Liberalism”.

Note the SSPX doesn’t say the Church in the US must not fight against the HHS mandate, or for her ability to work as freely as she can. But when religious liberty is smuggled for a Catholic value, we are clearly in heresy territory. It can’t be said that error is entitled to the same degree of freedom as Truth, and that a country in which error and truth are allowed the same rights is doing things the Catholic way. Jesus did not die on the cross so that people may be Muslims, of Hindus, or whatever. He did not say “I am one of the ways”.

Therefore, religious liberty is emphatically not a Catholic value, even if it was

“the vision of our founding [?] and our Constitution, which guarantees citizens of all religious faiths the right to contribute to our common life together”

and this is the first time I see Catholic bishops approving non-Catholic religious principles from a largely Protestant body, and taking their Protestant ideas as an example of good Catholic thinking. This must have been V II, no doubt.

If I were an American citizen, my take on the matter would be that whilst I can be a good Catholic and a good American, I will never allow my patriotism to come before my God, and therefore in matter of religious freedom I will acknowledge religious freedom as a component of American political life, whilst wishing and professing the Catholic view on the matter, namely: that error can never have the same rights as Truth.

I do not think this is too much to ask of a Catholic in the US, because it is not too much to ask of a Catholic everywhere else. On the contrary, when the US bishops make of religious liberty a religious value, they are mixing Catholicism with US politics, and giving right to those who say V II, wrongly interpreted – as on this occasion – only produces confusion and heresy. I understand they are fighting a good fight against secular oppression, but they are sending signals that whilst politically acceptable are very wrong if taken as religious principles.

SSPX-Vatican: Bishop Fellay Explains What Is All About 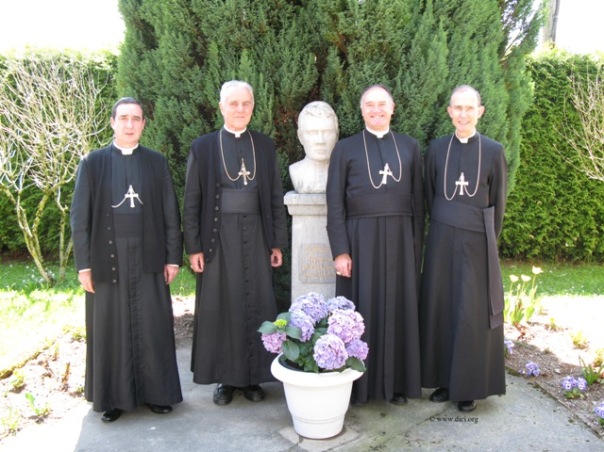 Much to talk about: the SSPX Bishops.

The tireless troops at Rorate Caeli have the translation in English of an article concerning a “reserved” (read: leaked) letter from Bishop Fellay to his three colleagues. You can read the content of the article here, so I will not duplicate it with the copy-and-paste.

It appears to me the most important elements are the followings ones:

1) The SSPX is ready to reconciliation, provided no concessions are asked from them “concerning the faith and that which derives from it (liturgy, sacraments, moral, and discipline)”. “From them” are, I think, the operative words here.  I cannot interpret this in the sense the SSPX asks the Vatican to retract V II, then if this is the mentality it would have been wiser if everyone had stayed at home in the first place. I see it rather in the sense that the SSPX will not be ready to make any concession to the modernist element within the Church (I know, modernism is an heresy; but isn’t it refreshing to call things as they are?).

2) “True freedom and autonomy of action” must be granted, which allow the SSPX to “grow and develop”. This means – I have written about it in the past – the SSPX does not want to be muzzled, or to be reduced to the Bonsai in the Vatican gardens. In plain words, if there is a reconciliation the SSPX’s fight against both what is wrong with V II  and what went wrong after V II will continue unabated, and will not be less vocal.

If you want en example of this, look no further than at the US Site of the SPPX, with the last critical intervention about “religious freedom” (I’ll write about this on a separate post, because it is very interesting).

It seems, therefore, Bishop Fellay has a very pragmatic approach, one of obedience which only refuses to comply when the obedience becomes suicide, betrayal of Catholic values or, frankly, stupidity.

Note, however, this second condition is in contrast with the interpretation the SSPX will only accept reconciliation if the Vatican “converts”, as in this case this condition would be utterly superfluous. I have, therefore, no fears the SSPX will ask the Vatican to “convert to Lefebvrism” before an agreement is reached.

3) A third surprising – to me, at least – element is in Tornielli’s affirmation as we speak three out of four SSPX bishops oppose the reconciliation to various degrees. I do not know what to make of it, as what transpired in the past indicated only Williamson would have (grave) reservations, and the other two bishops would accept a reconciliation which does not lead to compromises or abiurae. And in fact, it seems to me the letter is written on the basis that if things go as Fellay wishes, there will be at least two of the other three bishops on his side.

We will see how this pans out. Personally, I find it very satisfactory the SSPX lays very reasonable and, in my eyes, not negotiable conditions precedent to the reconciliation, so that if the reconciliation fails because the Vatican fails to deliver on this point, I for myself will have nothing to blame the SSPX for.

Comments Off on SSPX-Vatican: Bishop Fellay Explains What Is All About

Rorate Caeli has some reflections about Archbishop Marcel Lefebvre, who died 21 years ago.

I disagree with their statement that without him the struggle for the preservation of traditional Catholicism would have been lost – my take is the Holy Ghost allows the Church to undergo periods of confusion, not to lose Her mission and identity – but I think it cannot be put in doubt that this man gave a huge contribution to the vocal defence of what Catholicism had always been and should have remained.

Twenty-one years after his death, we see Archbishop Lefebvre – though of course not perfect – more and more vindicated not only among conservative Catholics  (who certainly have always loved him to a degree, even those who disagree with the SSPX stance)  but among mainstream Catholics and the Vatican hierarchy, as the problems he foretold punctually exploded with devastating force and as the…

A Birthday Gift for the Holy Father? 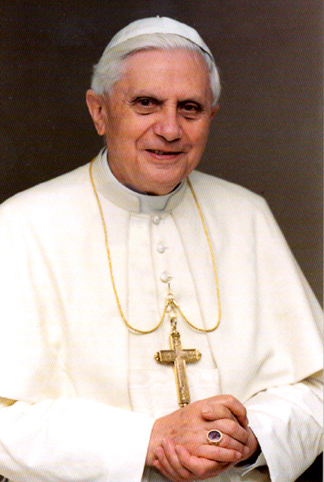 Today is the Holy Father’s birthday, and I join all the well-wishers from all corners of the world.

At the same time, I wonder whether the Holy Father might not have chosen this day to make himself a very, very special birthday present…

It would be so beautiful if on this day we could celebrate the Holy Father’s birthday and the reconciliation with the Society of St. Pius X.

Yesterday the German SSPX site issued a statement saying the reports from “Le Figaro” and (even more explicitly so) “Der Spiegel” are “rushed speculations”. Well of course they are, aren’t they? Before the official statement the only thing you can do is speculate!

Still, simple people like me can scarcely imagine both these prestigious (at least in the opinion of the world) publications would run the risk of being proved wrong in such a way.

If this happened, this would in my eyes only mean one of two:

a) journalism as an honourable profession is truly dead. I mean, even with the standards of today.

b) Vatican officials have wilfully leaked false news of an agreement, in the hope the SSPX would be considered the culprit when the agreement is not reached.

This has really been a rollercoaster, with news of an agreement leaked or hinted several times and then proved wrong. We will, of course, have to wait and pray.

May God grant this is the last day of waiting, and a day of joyous thanksgiving.

Comments Off on A Birthday Gift for the Holy Father?