← He Who Loves, Waits
Feed the Hungry? →

The SSPX, The Pope, And The Legend Of The Wolves 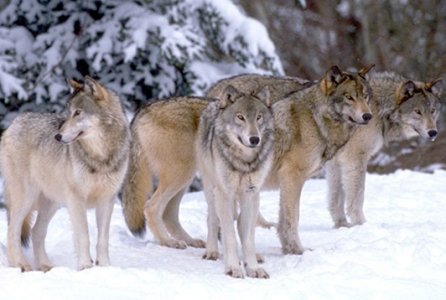 Never seen them around the Vatican.

I have often noticed how a certain kind of Catholic tends to think we have two Popes. They do not do it only with the present one, but with every one. Certainly, though, this is particularly evident with the current Pontiff.

The first Pope they have is a smart, cunning man. His intellect vastly surpasses the one of the common mortals. If he isn’t an outright genius, he very much resembles one. Whatever he does, must be the expression of this uber-fine intellect. Even when it seems he has made a mistake – say, Assisi gathering; or caving in to the “trendies” in the Wagner affair; or not acting for months in the Austrian matter – they will assure you it might seem something went wrong, but in reality some extremely far-looking plan, whose long-term wisdom we cannot even fathom, is being actuated. You have no idea, they will tell you. He is sooo smart.

More often than not, the very same people think they have a second Pope. This one is the complete opposite of the first. He is frail, and rather naive. Wolves circle around him without pause like he lives in a Jack London’s novel; the reasons for this no one cares to explain, considering not one of the supposed wolves is there by coincidence, but all of them are there because they are wanted just where they are, by the very Pope. This second Pope doesn’t seem very smart. He doesn’t know what happens in the world outside, and only relies on the wolves to tell him what’s up. He seems to not even have an internet connection. He speaks several languages, but newspapers don’t make it into his office. He is lied to, manipulated, made a puppet of.

I’ll tell you what I think. I think this Pope is smart, and knows what he’s doing. He has around him the people he wants to have around him. If his aides are the right ones, than the merit is his, because he is the one who chose them; if they are the wrong ones, then he is responsible for this, for the very same reason.

I think this Pope is nobody’s fool, and a vast improvement on his predecessor; but I’ll tell you very frankly he is no hero of mine. I think the weak choices he makes are, all of them, conscious choices, made in the full knowledge of their consequences. I think so, because I think he’s smart, and I think I only have one Pope.

I think this Pope has decided from the start his pontificate would have one foot on the gas, and another on the brakes. When he decided to issue Summorum Pontificum, he knew his bishops would have boycotted it, and he knew he would have allowed them to get away with it. He wanted to do the right things, but without much energy, lest it causes too many problems. So he did a lot of things right, and to balance that he did a lot of things wrong. Bishop Bonny, about whom I have written yesterday, is one of his (many) wrong, or catastrophic, appointments or promotions. The number of heretical or extremely questionable bishops appointed, or promoted, by him is vast (scour the bowels of this blog, and you’ll see what I mean). He is the man who installed Nichols in Westminster. Schoenborn is a protege’ of his. His German bishops go around frolicking untouched. I won’t insult his – and your – intelligence by telling you he didn’t know his trendy bishops and cardinals would behave that way. Of course he knew. He knew, because he isn’t stupid. And he knew, because he does not remove them.

Now we are at the two Popes again. The smart, forward-looking Pope who decides to seal the reconciliation with the SSPX is (again) at the same time an old, frail man who in the next weeks will be surrounded by wolves (chosen by him; all of them, bar none) trying to let him do… what exactly? Say it was all a misunderstanding?

Please, let us abandon the legend of the wolves. The man knows what he does, and knows what the consequences of his actions are. He has clearly made his decision, and we must trust him he will follow through with it, in his own time. He will be the one who delights us if things go as they should, and who disappoints us if they don’t (improbable, anyway).

He is responsible, because he is in charge; and he knows that.

← He Who Loves, Waits
Feed the Hungry? →
Loading Comments...