V II And Your Poor Knees 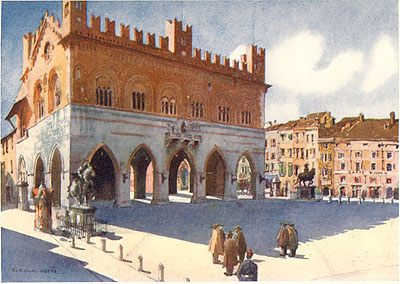 Piacenza, “Palazzo Gotico”. I really didn’t want to post a photo of the Cardinal, you see…

Cardinal Piacenza has suggested some days ago the VII documents should be read on one’s knees, because V II is “en event of the Holy Spirit”. All 141,000 words of them, I think he meant.

I have been trying for a while to give some sense to this rather extraordinary declaration. I could not find any other possible explanation than the following ones:

1. The Cardinal is a fun-loving person, always ready for a joke. Well said, Your Grace!

2. The Cardinal loves physical exercise, and thinks it should extend to one’s knees. I am not sure about the appropriateness of this particular suggestion, but I commend the concern for our physical health.

3.  The Cardinal is very fond of penance, and well aware of the redeeming virtue of sufferance. Therefore, he wants to add to our spiritual penance (the self-infliction of the V II documents in their entirety, so that we may say “never again!” with renewed conviction) a strong element of physical pain. I for myself would suggest such a penance only to the strongest souls, but again one understands where the Cardinal is headed.

On a slightly more joyous and therefore less suffering note, the Cardinal might be aware that the Society of St Pius X is on the brink of being fully reconciled to Rome; an event which, no doubt, goes to the great credit of the latter.

It would be interesting to know:

a) whether the cardinal thinks this is an “event of the Holy Spirit”, and

b) whether the Holy Father has demanded the SSPX bishops perform the above mentioned penance, seen that the V II documents were an event of the Holy Spirit…

But no, really, I think His Grace wanted to be funny.