After 2000+ years, Christianity is in need of a remake, our hero must have thought. Why not introduce a Chris 2.0 version then, full of PC applets for the gullible.

I have to tell you that over the course of several years as I have talked to friends and family and neighbors when I think about members of my own staff who are in incredibly committed monogamous relationships, same-sex relationships, who are raising kids together, when I think about those soldiers or airmen or marines or sailors who are out there fighting on my behalf and yet feel constrained, even now that Don’t Ask Don’t Tell is gone, because they are not able to commit themselves in a marriage, at a certain point I’ve just concluded that for me personally it is important for me to go ahead and affirm that I think same sex couples should be able to get married.”  – President Barack Obama

Christianity counts for nothing. What counts in Chris 2.0 is to have an “incredibly committed monogamous same sex relationship”, and one wonders how one can be so confused.

Someone should tell this chap, unbelievably become President thanks to an astonishing episode of reverse racism, that in Christian societies monogamy is a virtue because Christianity says so. An incestuous couple wouldn’t be considered “moral” because it is “incredibly” monogamous. A person sleeping with his dog wouldn’t be considered a fine chap because he is so committed to only commits acts of bestiality with his “lover”.

Logic doesn’t count in Obamaland. Read it again and notice the sugary emotionalism, the hollow fake sentimentalism. O the poor, poor faggot who can’t marry! How sad does the President feel for him after he has been fighting on his behalf! If the american soldiers fighting on his behalf implore him not to allow sodomites among their ranks, will he listen to them?

You would say the man, having been raised a Muslim, simply doesn’t know Christianity. But there are a couple of problems with this reasoning:

a) Muslims aren’t more favourably oriented toward “incredibly monogamous same sex couples” than Christians are, and

b) this man is the sam eon record for saying as follows:

“I’m a Christian. I do believe that tradition and my religious beliefs say that marriage is something sanctified between a man and a woman.”

Look, in 2004 Obama still had some traces of logic: he acknowledged to be a Christian means to consider marriage something sanctified between a man and a woman. If one doesn’t believe  this, it follows, one is not a Christian.

Not even if the Christians fight on his behalf.

It is sad to see the most powerful nation  on earth is run by a complete moron. But at the same time it is reassuring to see he has made another mistake (perhaps he didn’t have any choice, after his VP’s gaffe; but it’s still a dangerous step to take) and has decided to take position on this matter on the day it was shown to him it is tantamount to ask not to be reelected.

North Carolina shows this will cost him a part of the black vote. Not a huge one, but one big enough to put him in serious trouble. With the Catholics he is following the same “strategy”: alienate the moderates, and gain the vote of those who would have voted for you anyway.  Who does Obama think will re-elect him in November? There aren’t so many perverts after all…

Still, we should be rather satisfied today. The mask is off, Obama will not be trusted anyway as even the left will smell opportunism, and we have another beautiful battleground, one where North Carolina has already shown what happens when the black vote abandons the President.

We are urging customers across the globe to ‘Dump Starbucks’ because it has taken a corporate-wide position that the definition of marriage between one man and one woman should be eliminated and that same-sex marriage should become equally ‘normal’. As such, Starbucks has deeply offended at least half its US customers, and the vast majority of its international customers.

On January 24th, 2012, Starbucks issued a memorandum declaring that same-sex marriage ‘is core to who we are and what we value as a company.

Starbucks also used its resources to participate in a legal case seeking to overturn a federal law declaring marriage as the union of one man and one woman.

In many areas of the world where Starbucks does business, the concept of ‘gay marriage’ is unheard of and deeply offensive to cultural, moral and religious values.

In taking these actions, Starbucks has declared a culture war on all people of faith (and millions of others) who believe that the institution of marriage as one man and one woman is worth preserving.

A portion of every cup of coffee purchased at a Starbucks anywhere in the world goes to fund this corporate assault on marriage.

We urge consumers across the globe to join the ‘Dump Starbucks’ campaign.

I encourage everyone to:

c) spread the word among friends and family.

President Obama Should Be “Entirely Uncomfortable” With North Carolina Vote

The people of North Carolina have spoken.

Nay, they have shouted.

61 to 39 percent in favour of banning so-called gay marriages, these are percentages you won’t see often in the free world.

This is, I think, the more relevant because it comes in the middle of a presidential campaign increasingly more dominated by religious questions: the HHS mandate and now the attitude of a Christian country toward open perversion.

If I were Obama, I would start to think my advisers  are a bunch of idiots who will drive me to the wall before I can say “Kathleen Sebelius”; with the first of the idiots being, of course, his VP, who makes everything he can to make Obama look as he deserves.

Also note the direction things are taking: North Carolina already banned so-called gay marriages, but the electorate clearly wanted to slam the door altogether, and twenty-eight other states preceded it. Make no  mistake, this confrontation is getting harsher.

I have often expressed the opinion, and repeat it today, that the so-called gay movement has some chances of success until there is no great opposition on the other side and they can hope in a benevolent disinterest from mainstream America.

This dynamic will, I think, entirely change when the conflict erupts and becomes open war. When the average citizen awakens to the perversion of sodomy and the absurdity of giving it legal recognition, homos will have no better cards than paedophiles.

For a while, judicial activism can hope to compensate for the several dozens of defeats in the popular vote, but if the USA are to survive as a democracy, the people will demand that their voice be heard.

Today, once again, the people have spoken. There is no mistaking either the message in North Carolina, or the general climate in the rest of the country.

On this occasion, Obama has tried not to shoot himself in the foot but thankfully, his VP did it for him. North Carolina could be decisive in November, one cannot but feel Biden is doing an excellent job. I wonder how Obama’s opinion on the matter will “evolve”, though.

Kudos to the people of North Carolina. They have reacted in the right way to the attempt to make abomination presentable.

But make no mistake, the only way to let this nonsense end is the reintroduction of sodomy laws. We’ll get there one day, though I doubt I will live to see it. 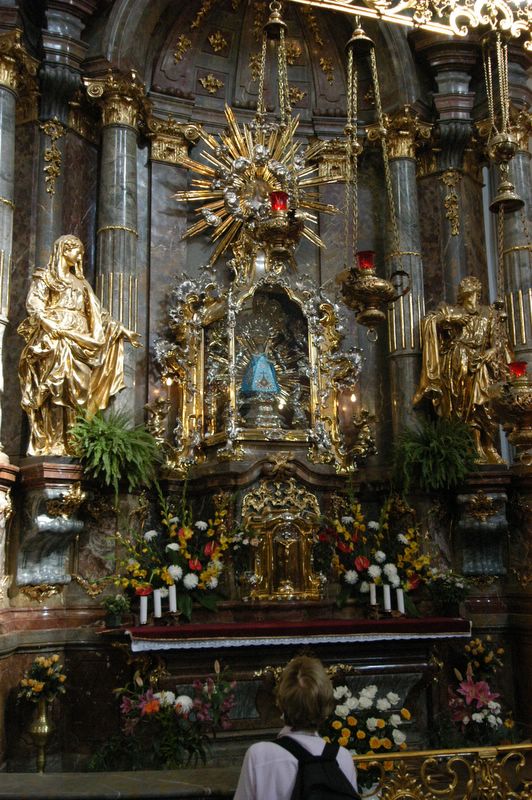 The Infant jesus of Prague is a miraculous* wax statue with a moving and edifying history. It was first donated to the Discalced Carmelites of Prague by a rich lady who, after the death of her husband, desired to dedicate herself to works of piety and charity. The lady donated the statue (very dear to her heart) to the Carmelites saying “I hereby give you what I prize most highly in this world. As long as you venerate this image you will not be in want”.  The lady’s work proved prophetic on several occasions as the following years proved that whenever the Carmelites seriously recurred to the statue, they were helped and when they neglected its proper devotion, they weren’t.

The Carmelites put the statue (made of wax itself, with rich vestments) in their oratory and performed special devotions in front of it twice a day. For some reasons…