Second reblog of the day…

Beautiful entry from Patrick Madrid’s blog, linking to the video of the homily of a young Franciscan Friar talking about the theme of “do not judge”.

Father Ignatius Manfredonia of the Our Lady of Guadalupe Friary is surprisingly young, but he covers all the bases. He starts pointing out to the eminently devilish nature of the “who are you to judge” cry so often heard nowadays, goes on with the brilliant saying that “saintliness is not silliness”, examines critically the also well-known saying of the Church who “loves the sinner and hates the sin” (very perceptive part, this) and in general gives a brilliant picture of what we can and should judge (the scandal, the open heresy, what is evidently wrong) and when we should refrain from talking about (what is motivated from personal hatred, or things we do not know). He mentions St. Augustine with a clear remark…

I read in the blogosphere invitations to the laity to avoid “judging” bad bishops in matters of faith, and feel the need to say one word or two about this.

1. If by “judging” we intend “subject to a trial in front of a tribunal” (as in an article I have read around, citing a father of the Church), I will agree that this is perfectly fine even today.  I would, personally, love to see Archbishop Mueller tried for heresy, but I do think that those who judge him should be religious. Preferably sound ones, like for example those of the SSPX.

2. If by “judging” we intend to reserve Bishops to the jurisdiction of canonical tribunals even in matters not of faith, I must disagree. Particularly in these disgraceful times, if a Bishop is, say, tried for child abuse I would be the last one to demand…

The scandalous invitation for the President continues to make waves; this time, we see a rather excited Bill Donohue barking furiously against orthodox and sincere Catholics who just refuse to let elementary logic and common sense go to the dogs.

Please sign the “little petition they have out there”.

By the way, I wouldn’t say that Cardinal Dolan was bought. Even the Obama lieutenants are too smart for that. I’d rather say he has sent a heavy signal he is ready to sell off; just in case, you see. One must care not to have enemies, he obviously thinks…

Voris dismantles the rather pathetic – if very excitedly exposed – arguments of the man in the usual poignant way.

We have the wrong people at the top. 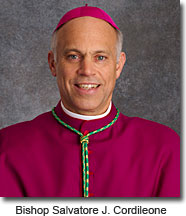 Will he deliver? Archbishop Cordileone.

If there is one chap among the degenerated crowd of the so-called National Catholic Reporter (aka the Fishwrap) who can be read, it is Mr John L Allen.  Whilst it is not clear why the man still writes for said Fishwrap (we must all live some way, I suppose) it is clear he is used by the NCR to smuggle the idea that they be, in a way, Catholic. Which is, of course, tragically wrong.

Be it as it may, Mr Allen has an interesting contribution about some new (arch)episcopal nominations in the US, which have lately fallen on the more conservative side.

This can obviously not have been the work of the Pope, as the good man sees his German Bishops and Cardinals openly embracing heresy every day without even moving his Kleinfinger. Neither seems this to be the work of Cardinal Ouellet, as under his tenure there has been no notable improvement in the average quality of the appointments (and already there are rumours Monsignor Gaenswein will be pushed upstairs; I wonder what his pastoral credentials are). Similarly, Cardinal Dolan must be clearly excluded on the ground of his now abundantly proved cowardice in the face of the enemy.

It seems, therefore, at least realistic that Mr Allen is right when he says Cardinal Burke, who is also a member of the Congregation for bishops, might have been the driving force behind the recent, rather pugnacious US appointments, and it is clear particularly the appointment of Cordileone to San Francisco is an indication of some storm taking shape above the Bay.

Having said that, I would wait before uncorking the champagne, because Cordileone (who is not entirely immune from criticism himself, at least if his positions on death penalty and illegal immigration are the ones Allen implies) might well show he has less of a lion’s heart (Cordileone can be read as an archaism or dialectal expression for Lionheart in Italian) than expected. Whilst there is no doubting the fundamental soundness of the man (I have written about him in the past, and am glad there are still (arch)bishops like him; he is also a stout friend of the Mass of the Ages), whether he will have the guts to do what there is to do in the San Francisco’s circle of hell is a different matter altogether.

In my eyes,  the Archbishop of San Francisco is expected to excommunicate Nancy Pelosi and those like her if he wants to really set the pace, and leave a mark whilst doing it; nothing less will, in my eyes, do and nothing less could create that huge media echo which alone can force the American Catholic to look in the mirror and decide whose side they’re on.

Will the new Archbishop have the guts to do it? I doubt, and I would be very glad to be surprised.

Will the Archbishop be able to be really effective without recurring to the extreme measure of the excommunication? I doubt that too, and whilst he might partially succeed in some way, I think criticism which falls short of publicly severing Mrs Pelosi’ public tie to Catholicism will not have the effectiveness we need.

In short, I do expect Cordileone to have a different tone than his very ineffective and weak predecessor (Archbishop Niederauer; another Benedict XVI’s appointment and carved out of the same wood), but I doubt he will be willing to deliver the all-out fall-out Mr Allen seems to indicate with his  supposed “no retreat, no surrender” stance.

Cardinal Dolan is already working actively at the retreat & surrender preparations should the need for it arise, and I somehow can’t imagine  Cordileone marching almost alone (Chaput come to mind; Vasa of course, a pupil of Bruskewitz; but not many others) on the path of orthodoxy.

We shall see. For the moment, I do think we’ll have Nancy Pelosi wreaking havoc in San Francisco for as long as we will have sodomite masses in new York; courtesy of Cardinal Dolan.

Comments Off on Readable NCR Article! 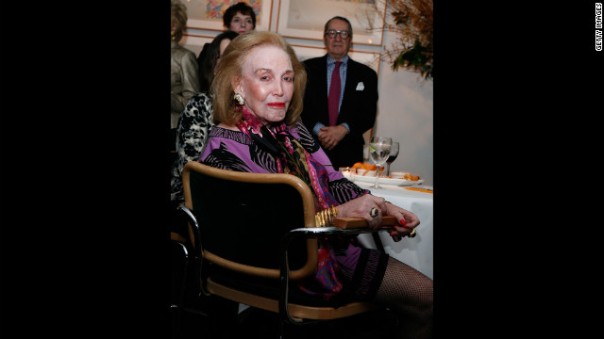 … and after death the Judgement. Old Bad Girls not excepted.

And so Helen Gurley Brown, the icon of sluttish behaviour who helped transform an entire generation of once quietly satisfied women into a bunch neurotic “I want it all”, erm, sluts finally died at 90.

Like the recently deceased Gore Vidal, she had a long life and abundant possibilities of repentance; as in his case, there is no trace of conversion on her last interviews; and again similarly to Vidal, she is now praised in death by those of her ilk.

As I write, the old cow has certainly discovered old girls do are in trouble when they stretch their paws, and will have a very keen appreciation of the Italian saying peccato di gonna fa arrabbiare la Madonna (the sin of the rock makes the Blessed Virgin angry; there’s another and more common one, but it has the “p” word and in an astonishing show of prudery I will not write it here…).

We do not know, of course, whether in some confused way the woman had started to see the light; but if she did she apparently didn’t say, which isn’t promising. We also do not know – and this we should certainly wish her; cow as she unmistakably was – whether perhaps in the last moments the same Blessed Virgin she had made so angry managed to come to her rescue. But what we do know is that – bar an always welcome repentance – the fate of this woman is now, most probably, a terrifying one.

Just imagine to have to repeat to yourself that good girls do go to heaven but you are in hell; and this for all eternity, after a short span of ninety years of folly.

Mayor Bloomberg praised her in high tones, though.