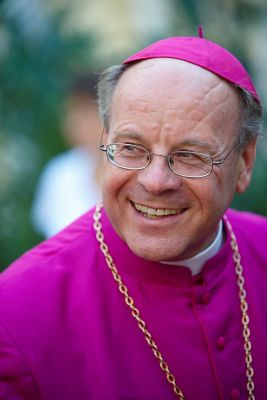 I have written several times about the scandal of the Kirchensteuer, which besides being absurd in itself is the main cause of the generalised prostitution of the German/Austrian/Swiss clergy, so fearful of losing the extremely generous income it provides.

It now turns out already in 2009 a rather conservative Swiss bishop had unilaterally decided to set an end to the Kirchensteuer and to substitute it with a voluntary contribution.

Let us listen to the press officer of this excellent man:

“Many still do not know that the Catholic Church as such does not demand any tax for her membership, and that in almost every Country she does not know a tax system comparable with the Swiss one”

The astonishing in this phrase is what I had already written about: that there should be country where people consider it normal that one is only then a Catholic, if he pays a tax!

Similarly, those who decide to get out of the Kirchensteuer system are not considered, or demanded to declare, that they are not Catholic anymore.

“In addition, not under any circumstances can they be threatened with the refusal of the Sacraments”.

Common sense to you and I, I very much hope. Not so in Switzerland, in Austria, and in Germany. Just ask around.

Think of this: in a time where the clergy of the German-speaking countries bends over forward ( actually, bend over tout court) to maintain their scandalous privileges, a bishop has the gut to willingly renounce to them! In nearby Austria, Cardinal Schoenborn must be terrified…

A very short googling shows Bishop Huonder as rather conservative and not really loved by his own clergy (always a good sign). I do not now how truly conservative the bishop is, but it seems to me he is doing the right thing, and does not seem to fear any collapse in his diocese’s finances (long-term, probably somewhat of a diet; a very healthy thing for the Church in Switzerland, no doubt).

The days of the Kirchensteuer are clearly counted, in Switzerland as well as in nearby Austria and Germany.

Think of that, all that whoring around of the German-speaking clergy (I do not write one tenth of what I read, because my liver is dear to me; believe me there are no words harsh enough to describe them) for … for…