← Of Archbishops And Alcohol
On Latin, The Holy Father Has His Priorities Wrong → 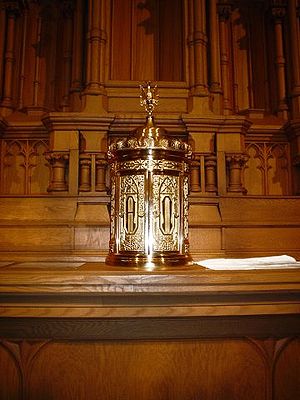 God is present among us!
Let’s talk loud about the weather!

Your typical Novus Ordo church (not the Brompton Oratory, of course; or any very conservative church), ten minutes to nine on a sunny Sunday morning.

Some people are trying to pray in the pews. They are on their knees, and it is obvious to the most obtuse moron they are praying because they are in a church, before Mass.

This doesn’t interest a group of people, generally rather old, making conversation out loud as if they were in their own living  room and only the scones and cream were missing. They are there in groups of two to four, and chatter like it’s going out of fashion; they do not even make any attempt to – at the very least – keep their voice a bit down.

They obviously see the people kneeling on the pews, and clearly trying to pray; they just don’t care. Much more importantly, they see the tabernacle in front of them, and do not think they should behave any differently than on the fish market.

Were they at the presence I do not say of the Queen, but of one among her more or less unworthy progeny they would be utterly intimidated at the majesty of the event, and would not dare to utter anything else than, perhaps (perhaps!) the most feeble whisper.

But they are, erm, merely at the presence of Our Lord and disturbing a handful of people praying, so they don’t care and go on with their, no doubt, extremely stupid talking until the Mass begins.

This happens, I assure you, with ugly frequency here in Blighty. There’s no saying the priests aren’t aware, because you see every now and then the one or other appearing and checking that this and that is in order whilst the salon goes on unabated. They know, they just don’t care. They seem to think it’s part of some mysteriously discovered “social atmosphere” of the mass.

If you have the patience to wait, you will often notice some of the loudest old women are “involved” in the Mass in some way. They bring the “gifts” (I will write something on this one day) to the altar, or regale us with their own dramatic rendition of the readings 9I must have written something on that), or stand at the side of the priest with the chalice, possibly wondering why you don’t see their halo  but certainly peeved at the way everyone wants to receive from the priest.

They clearly think the mass and the church space belong to them. They might not even be aware  of their astonishing lack of reverence, because they have forgotten what “reverence” is in the first place (only, I think they’d remember if they were invited at Court; but I digress…), but they are certainly aware that they own the place, and will show to everyone they are part of the landscape, which is why not even those kneeling and obviously praying are considered worth of the slightest consideration.

← Of Archbishops And Alcohol
On Latin, The Holy Father Has His Priorities Wrong →
Loading Comments...