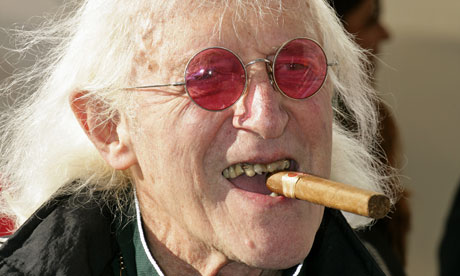 If you live in England, you cannot avoid noticing the growing waves concerning Jimmy Savile, an extremely well-known presenter, disc-jockey, “charitee”-activist, BBC icon  and what not. Oh sorry, I forgot: apparently a serial pedophile, too.

Now, I am not a private investigator or a policemen, and even if I think Mr Savile’s memory will very soon be deservedly covered in dirt, my point today is not to shoot at him. Not because I do not think he was a bastard (I truly think he was; an 1a bastard with certificate of authenticity, and it seems like a veritable dam of omerta’ is now going to get busted), but because what I would like to point out to you is how the BBC behaved in the matter.

The same organisation who is never tired of shooting against everything Catholic, has the microphones permanently full with “pedophile priest” stories and is oh so sensitive and politically correct when dealing with poof wanting to “marry”, and Anglican vicarettes wanting to play bishop, clearly tried to cover up the embarrassing matter of a BBC icon having been a pedophile for several decades, with the complicity of the Beeb.

It has now emerged the Beeb moved only when it was too late; that is: when a rival station demanded to know from them what they knew. Before that, material was suppressed and information clearly available not aired. And this is not a secondary matter, as the man was – apparently; I can’t say I have any remembrance of the man – a real heavyweight in the history of televised Britain.

So you have the BBC in short: ferociously biased against the Catholic church, and ferociously protective of people belonging to their own “clan” and perceived patrimony, and doing that for which they most criticise the Church: the cover-up of paedophiles among their own ranks.