The Hans Küng Show Goes On 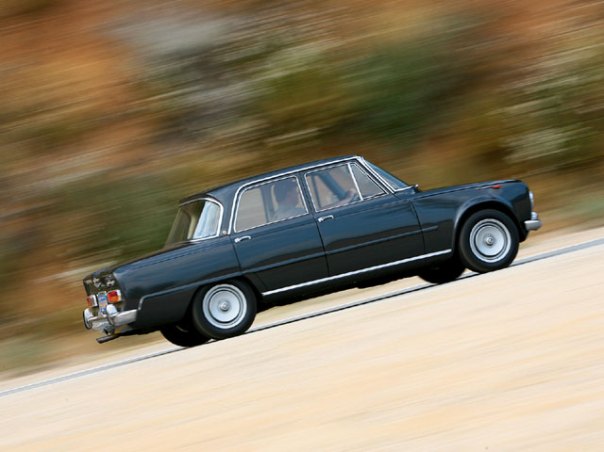 Probably the only right choice of Hans Kueng in his life: Alfa Romeo Giulia Berlina.

It is a pity, that the “Guardian” (for those of you who should not know: a very red newspaper, hopefully soon bankrupt, and good riddance) has not published the interview with the wannabe theologian Hans Küng in the usual, textual “question and answer” manner. Instead, we are served with a third-party report of Mr Küng’s “vision” of the Church; which is so bizarre it would be funny it this were not a baptised Catholic and even, officially, still a priest (someone will have to pay for this one day, I believe…).

The concept of Mr (Father? Arrghhh…) Küng now proposing a “revolution”  is not mentioned verbatim in the words of the Great Comedian, but it is reasonable to assume such things are discussed with him beforehand. The idea of revolt, of open disobedience, is clear enough.

What comes out of the interview is grotesque:

1) there would be (apparently) an invitation to “unseat the Pope”, starting a revolution from below who – according to which principle, is not clear to me – substitute the Church hierarchy with something, well, different.

2) The Church is described as “authoritarian” (an amazing discovery, this one: the man is 84 and I would say he had some time to do his homework; but I digress…), which is supposed to be bad; then in Kueng’s world, authority is evidently bad qua authority.

3) The man is not satisfied with the bishops, whom he considers too conservative. No support for the pill, you see. Astonishing. I do agree that most bishops are either bad or very bad, but to manage to let them look good is a feat only Mr/Father/whatever Küng could achieve.

4) The man accuses the Pope of surrounding himself with luxury. Envy is a capital sin. Besides, someone should inform him that for some very valid reasons, the Pope should not jump on the bus and live in a council house.

5) The man drove a red Alfa Romeo Giulia in the Sixties. Excellent, nay, legendary car. Bully for him. But wait, he was… a priest? And one who reproaches a Pope for living as a Pope? Is a red sport saloon (make no mistake: Alfa Romeos in those times were serious fun cars, even the saloons, and expensive their part…) appropriate for a priest? Well I do not know how appropriate it was for a priest to drive this car in red, but I can’t say I disapprove his taste in matters of cars…

I wonder whether this was good to pull young women? A priest who never ever looks like one, talks of pills for women, and drives a Red Alfa? Ah, Mundabor, you should not be always so cynical…

6) Küng explains how he hoped the future Pope might “turn corner on certain issues”, but alas, it was not to be. I would still say the damage for the future Pope from the acquaintance with the man has still been remarkable, but this is just me… . It is reassuring to know since the Sixties (where Kueng is described as one of the “starts” of VII; go figure…) the two have not met. Just imagine if they had. We’d have Assisi XIV by now…

7) He considers Cardinal Schoenborn’s action against the heretics too hard. There must be a joke somewhere here; but he is from Switzerland so I can’t find it.

8) I knew that Kueng had some strange idea about some world religion, but it would appear his turning away from Christianity is now rather total. The Guardian describes our man’s ideas thus:

Weltethos was founded in the early 1990s as an attempt to bring the religions of the world together by emphasising what they have in common rather than what divides them. It has drawn up a code of behavioural rules that it hopes one day will be as universally acceptable as the UN.

For heaven’s sake, even a child must understand that if they emphasise what they have in common, they must perforce downplay everything that is specifically Christian.

What’s Christian in that? How can this joke be a priest? Who is responsible for that?

Also note the adherence to the new religion: peace, and the new “Pope”: the UN.

Alas, I think the man has gone “beyond” being a Christian a long time ago. His “religion” seems to be a vague heathenism based on emotional, effeminate (no, I do not think he himself is effeminate; not with that red Alfa…) concepts of “getting along”, as if the planet were a huge afternoon tea, and us in there to let it proceed pleasantly.

The man is clearly on the Hell Express, and I can’t imagine there are Alfa Romeos in hell; not even red ones.

I am sure he would find there many of his old colleagues, though.

Bar an always welcome repentance, he’ll have to quarrel about “Weltethos” mit them. 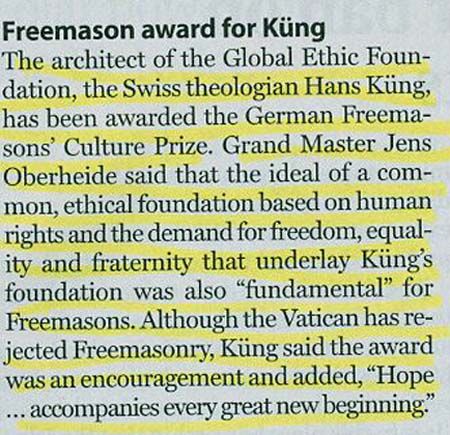 To put it mildly, Hans Kueng does not age gracefully.

This vecchio malvissuto, who has thrown away his entire life (and, unless he repents, his soul) prowling about the world seeking the ruin of souls has now decided to burn the last bridge and, in two words, declare Pope Benedict’s papacy illegitimate if a reconciliation with the SSPX becomes reality.

As always, this blog will not say things half, and I must say that there are two scandals here:

1) a liberal madman going to always new extremes in his madness, and

2) a Catholic hierarchy utterly unable to punish in an exemplary manner anyone related to the Holy Father by way of friendship, or acquaintance, or former professional activity.

It is  beyond belief that in 2012 this man has not been excommunicated. This is not meekness. This is cowardice, incompetence, and a huge scandal.

Every time some nut case…