← Vienna, Schoenborn, Ottomans
The Thing With The “Joy” → 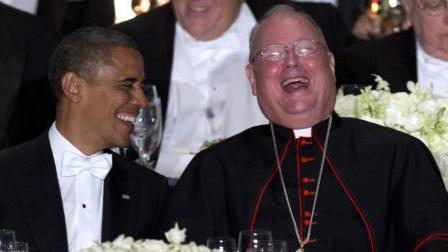 Mamma, mamma! Look how successful I am ! Exhilarating!

There is in Italian a rather imaginative expression, “strofinarsi alle gonne del Potere”, or “to rub oneself to the Power’s rocks”, which describes the behaviour of those who seek proximity with the powerful in order to gain personal advantages of any sort.

I must think of this expression rather often, as this is exactly the behaviour I see in countless prelates of the Church.

It would be wrong to believe that such behaviour is moved by the desire to obtain truly tangible material advantages: I do mot think Archbishop Nichols prefers to dine out rather than using the services ( I imagine) of his own cook, nor do I think they find the luxury hotels or sumptuous banquets particularly worth eating (ok, in Cardinal Dolan’s case the doubt might be justified; but I digress…). I even exclude that the search for favours for relatives and dear ones will play a major role.

In my opinion, two factors are here heavily at play: loss of faith and vanity.

An archbishop, say, who believes in the Christian God would never even THINK of abetting sodomy under any  guise whatever, as in “we are oh so nuanced” (Nichols) or “it’s a commitment so it can’t be so bad” (Woelki & Co.). No, one who is able to say such things has lost his faith a long time ago, perhaps converting to some strange dalai-lamaesk wannabe cult of sort, more likely having lost faith in the supernatural altogether.

Only at this point can, I think, vanity set in, perverting the innate and in a way unavoidable sense of self-esteem and desire of recognition in an utter prostitution to the worldly gods of popularity and mass approval. Everyone has an ego of course, and in some of us this ego will have a rather strong character; but it is when the gratification of the ego comes before everything else – for example the sense of obligation to the habit, even if one has lost the faith – that things become really serious.

When, therefore, loss of faith and vanity meet, the above mentioned episodes happen; or, on an almost equally worrying scale, one insists in being photographed together will the very powerful and very evil, merrily laughing as if the said evil and powerful were not staging the Holocaust  every day and even threatening the very freedom of Catholics.

But this does not seem to really matter. What matters is that the one or the other (Brit or German or American; fat or thin; Archbishop or Cardinal) is seen to be at the very top, and very much in “tune” with the “times”.

May God forgive them.

Unless they repent, I don’t  bet my pint He will.

← Vienna, Schoenborn, Ottomans
The Thing With The “Joy” →