SSPX: Feast Your Eyes (Plus Some Sad Reflections).

On the newly launched website  of the new building for the St. Thomas Aquinas’ Seminary, you can see the future of Catholicism in the Western world.

Whilst the Vatican II church waffles itself into irrelevance and almost extinction, the sane parts of the Church not only resist, but grow and prosper. See the video below

to see what is happening.

It is difficult, very difficult not to see that traditional Catholicism is prospering and growing, whilst the (numerically still vaster) NuChurch is dying fast, sinking into irrelevance in the process.

The site and video explain to you nothing less than the future of Catholicism: solid, determined, serious. No laughing clowns in sight, no “daring” architectures, no waffle whatever.

Rorate Caeli  not only has the video, but in a truly dramatic contrast has another blog post about the slow but perceptible decline of the Church in France.  Besides the sobering statistical figures, the blog post has a rather telling photo of a huge (and, if you ask me, horrible, Le Corbusier or no Le Corbusier; see photo below) Dominican seminary now housing a dozen of seminarians.

For the dozen seminarians, the sense of decay must be palpable every hour of the day.

This is how the drunkenness of Vatican II is dying: leaving a lot of (mostly ugly) concrete in empty buildings, after deserting the Western world now under a massive attack from the forces of evil; forces of evil which the church continues to cajole and try to be friends with.

The two photos shown give a very clear idea of what the future of these two opposed vision of the Church will be, and which one of the two (the traditional, of the V II  one) will survive.

The bill for the madness of the past is being presented very fast, and with the almost complete extinction of those organisations which have embraced the “spirit of Vatican II”-Zeitgeist (Jesuits and Franciscans come to mind; an awful lot of scrounging nuns; and who knows how many other minor orders) more and more bills will become due in the next decade or two. 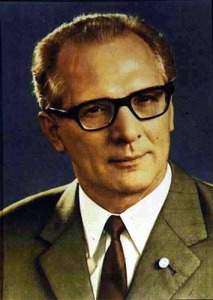 Another who just couldn’t get it: Comrade Erich Honecker.

In the meantime, serious Catholicism will continue to grow, until in one generation or two it will control the field again because of the literal, physical death of the opposing camp. A much reduced Catholicism it might be, but probably a much more effective one; than the vast majority of the hundreds of thousands of priests and religious we have now aren’t doing much for Catholicism other than muddle the waters, encourage sodomy or support same-sex couples, desecrate the mass,  abet heresy, being openly simoniacal and hobnob with the enemy.

In their blindness, they remind me of Erich Honecker, the deluded DDR Comrade celebrating the 40th anniversary of the DDR whilst the building was squeaking in a way impossible not to notice.

Honecker’s regime did not live to see the 50th anniversary.

Whatever the challenges of the future, we can be very confident the V II madness will not live to see the 100th.