The Shepherds And The Sheep 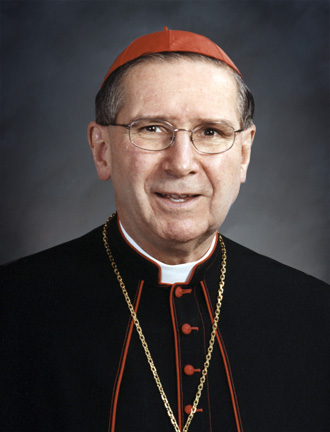 Too many like him, for too long: Cardinal Mahony.

If you ask me, Archbishop Chaput is right and wrong in his observation that if Catholic voters had been more ready to abandon Nazi Democrats  in the past, things would not have come at the point they are now. He is certainly right if we observe only the immediate cause of the Catholic behaviour; he is, I daresay, rather wrong if we look a bit further than that.

The secularisation of the American Catholics is not the exclusive result of a newly developed faith in the infallibility of the Democratic party, but rather the result of their clergy having encouraged them every step of the way toward their systematic neglect of basic Christian truths. Catholicism being a rather pervasive presence in the life of churchgoers and their offspring – and, by reflex, an important cultural element even among those who do not attend; see Italy –  I cannot imagine a collapse of Catholic thinking if this thinking is actively and assertively promoted from the pulpit; similarly, in the absence of such assertive Catholicism I cannot see how the systematic neglect of basic Catholic values could not have transmitted itself to the ordinary Pewsitters. In the end, you get out of the pews what you put in them.

Therefore, if the excellent Archbishop had blamed the Catholic clergy first and the Catholic electorate second, I think he would have gone far nearer to the real roots of the problem.

The very fact that until not long ago most priests and bishops would have considered a “political interference ” to say such things of a pro-choice candidate (strangely, they never had such problems with other issues like illegal immigration or other alleged “social”, and therefore less controversial, themes) tells you everything you need to know about who were those giving the Democratic party indirect but still precious support without caring for their Nazi agenda.

A concept I will always go back to is that the fish stinks from the head down. Bad clergy will invariably produce a great number of faithful made to their own image, at least for a generation or two; this is what has happened, in the most brutally evident of ways, with the US clergy in the last decades. Therefore, the main responsibility for the continued “catholic” support of the Democratic Nazi party lies by the US clergy.

In my opinion, a serious discussion about how the Democratic electorate should behave cannot be separated by the honest admission that, if we look at the great picture,  two generations of Catholics have never even been told how to behave and have therefore informed their way of thinking – human nature being what it is – to the prevalent mood they saw around them.

Bad as this is, I think their shepherd have behaved worse.

Comments Off on The Shepherds And The Sheep

Remove the moustache, and you’ll find Michelle Obama underneath.

An old letter has resurfaced, in which the worst first lady ever takes a stance on child killing that would make Heinrich Himmler shiver.

You can read the letter here. Please note the woman (“lady” is, I am afraid, too much) does not even accepts the use of the words “partial birth”,  which she evidently considers too politically incorrect as it reminds one that someone is being born, and there is a life at stake. Birth is clearly not a worry here; “legitimate medical procedure” is the expression of choice. With this reasoning, if the law allowed for old people to be smashed to trees like new-born kittens, this would be a “legitimate medical procedure” to her.

As the concept of “birth” must be kept away from the reader’s mind, the  woman prefers to use the words “so-called partial birth abortion”. Not really a birth, then. An unwanted excrescence, more like.

I think “late term abortion” is the expression she is looking for. Funny, that. I can imagine people like her 1) advocating the right for the mother to kill the baby in the first, say, four weeks after birth and 2) calling it “very late term abortion”. The logic is exactly the same.

I wonder if even Nazis went so far as to perform abortion up to the very point of birth. Perhaps yes, perhaps not. It certainly stretches things even for your average Nazi doctor.

Also, it is true that horrible experiments were conducted by Nazi doctors in extermination camps and elsewhere, but it is time to notice all this was made on the sly, without telling the German population.

Michelle Obama does not seem to have this problem. To her, a child can be butchered when half come to light (actually, as far as I know even when come to light altogether; they just leave the baby to die of cold, and still call it “late term abortion”) and this is something that can be said very openly and written in promotional literature, taking pride in the matter.

Seriously, Hitler can’t hold a candle to this woman.