Sodomites: Cameron Goes All The Way 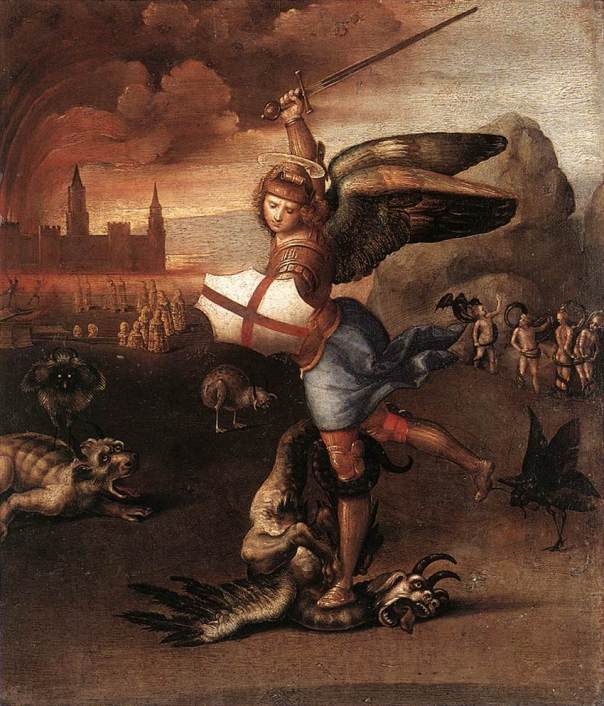 St Michael the Archangel, defend us in battle!

Saint Michael the Archangel,
defend us in battle.
Be our protection against the wickedness and snares of the devil.
May God rebuke him, we humbly pray;
and do Thou, O Prince of the Heavenly Host –
by the Divine Power of God –
cast into hell, satan and all the evil spirits,
who roam throughout the world seeking the ruin of souls.

Cameron has, in the end, decided to try to get sodomarriage approved, against obvious massive opposition within his own party but clearly counting on the votes from the heathens within the Tories and elsewhere. Excluding that Cameron may ever have moral motives, the background of this move is clearly to be seen in his necessity to give the LibDems something to chew after the humiliations they had to suffer on the Lords’ reform affair. I don’t think this is politically wise, but I do not know how bad the mood is within the coalition, and Cameron – who is a political prostitute with no second in the land – has evidently decided the advantages for the coalition will be greater than the obvious opposition he will face within his own party.

In what could be remembered as an astonishing sign of stupidity – or the knowledge the party and the Country are so rotten this can now be made without problems – Cameron has also decided to go the full monty and decide sodomarriage should be “allowed” in churches, if the relevant congregation wishes to do so.

Only a very stupid man – or an Anglican – could now fail to see where this leads: what is now “allowed” will, in just a few years, be claimed as a “human right”. Think of the Bad & Breakfasts, who were “allowed” (but obviously not obliged) to have sodomites under their roof, until the Gaystapo sued their “right” to do so.

This legislation – if it passes; more below – will pose huge problems and cause years of legal controversy as surely as the night follows the day. Teachers will at some point not be allowed to dissent from a clearly heathenish ideology, and the lame assurances of the Government they will be allowed to “dissent” will go the same way as the right of B&B owners to refuse to have sodomy under their roof. The Established Church will be the first to face the onslaught of the suddenly so pious satanic troops, and the Catholic Church will follow immediately afterwards (and who shall fight for us? Archbishop Vincent “Quisling” Nichols? Ha!).
Our best hope are, at this point, the Muslims; but in order for them to make a serious move it might be necessary for the perverts to sue them for compliance to the Gaystapo; which isn’t easy, as the Gaystapo is scared of them.

Cameron uses, this time, a different strategy. He doesn’t even try to force the party to obedience as he did with the Lords’ reform, getting pummelled as a result; he leaves them “free” instead, hoping to get the measure passed whilst avoiding the worst of the internal damage. This is the same Cameron who applauded the decision of the courts to force B&B owners to have sodomites under their roof, so you know exactly how much his promises of respecting the religious beliefs of Christians are worth.

In the next months and years we will know how much the rot has advanced in this country; a country once able to fight bravely against Hitler, but now either scared of the whining of perhaps 1% of the population, or too stupid to call a spade a spade and see the abyss of heathenism it is getting itself into. Make no mistake, open persecution is what will come after it; then Satan doesn’t stop his march just because “nice” people have decided civil partnerships are a good thing, and we shouldn’t be rude.

Will, though, this measure be passed? This is not sure at all, but if Cameron manages to ride Labour MPs the numbers aren’t encouraging. The main argument against such a proposal was for Cameron that the party might have taken his scalp directly if he had tried to impose this new madness on him; but he avoids this from the start, riding the heathens of the other parties instead. The mere fact he might survive this tells you all you need to know about the rot within the Tory party; they would get rid of him on the spot if he tried the same trick on, say, European matters but seem – for now – unwilling to do the same on sodomy. Congratulations.

As I write (and yes, I write because I can’t sleep…) I see only few positive elements for us, none of them safe:

a) The House of the Lords. The probability that this law be massacred in the House of Lords is not remote. This in itself would not stop the process, but would constitute a strong obstacle to the definitive approval of the measure. Seldom are the cases of legislation stopped by the House of Lords and pushed through nevertheless. A prolonged fight might also give Cameron a death of a thousand cuts, if the public opinion reacts.

b) Opposition within the other parties. This is not probable, but possible. Dissatisfaction among Labour voters is said to be palpable, but as socialists never where good Christians it is everyone’s guess how much weight this will carry (if you ask me: not much). If the Christians within labour manage to remember what Christianity is, the matter will become more and more embarrassing for their own party leaders. Milliband & Co. are largely goddamned atheists, but they are still politicians and will have their nose in the air to see where the wind blows.

c) Open Labour opposition. This was just seen with the Lords’ reform: Labour wanted a reform in principle, but they didn’t want to give Cameron a success he could not get with his own coalition and of which he would unavoidably have reaped the glory; therefore, they have decided not to like the details, and to shoot at the Government for all they’re worth. It worked a treat.
In this case, Milliband & Co. must seriously ask themselves whom they are working for: this measures will most surely be sold by Cameron & Clegg as a coalition success, and Labour runs the risk to look seriously stupid. Labour being far more disciplined than the Tories, if and when they decide to shoot at the measure Cameron can say goodbye to his piece of legislative crap, then without Labour votes he is dead in the water in the Commons, and easily steamrolled in the Lords.

d) The courts. make no mistake, this is going to keep the courts occupied for decades, in a long battle of attrition reminiscent of the right for conscientious objection in case of abortion (eventually won; not before many years, though, or without the sacrifice of many brave doctors and nurses ready to lose their jobs at the NHS and even emigrate). This law impinges on so many pieces of legislation – as in the end it is nothing less than the attempt to re-invent the Christian basis of society – that the legal controversies will be countless. Many so-called Church of England parishes will also sue, as will religious schools, hopefully with the best Catholic schools at the head. This is going to be good for lawyers, and will go on for a very long time.

Saint Michael the Archangel, defend us in battle.