SSPX: The Postman Rang Once 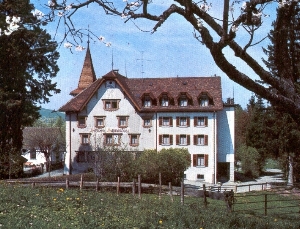 This is a difficult post: a blog post about what a French site says the Vatican has written to every SSPX priest, which has already been proved wrong because they wrote it to Menzingen ( SSPX headquarter) and they apparently copied and sent to every priest (boy, their photocopier must be good…).

1. Once again, Archbishop Di Noia writes over Archbishop Mueller’s head. Apparently (but see below) no fear of being drowned in yogurt there. Good!

2. Archbishop Di Noia appears to have posed, amidst the lines of a very long letter, the following conditions:

a) no discussion of V II in the media

I wonder what the Archbishop thinks, or if he just loves to write. The very aim of the SSPX is to fight against the distortions of V II. It is not a private exercise. The role the SSPX requires from her priests, which is the reason itself why the SSPX exists, is to say things as they are. This reminds me of Mussolini, who allowed dissident books to be published provided the run was limited to 1,000 copies. This is not going to work, full stop.

b) the SSPX does not establish itself as a parallel Magisterium.

This is not very intelligently formulated and I hope it does not come directly from Archbishop Di Noia’s pen. If the Archbishop thinks the SSPX want to establish their parallel Magisterium, he has a lot of studying to do. More probably, he means the SSPX must accept every cretinous statement of the V II church (religious liberty, and so on) as infallible Magisterium.

c) presents the objections in a positive and constructive manner

I have never read a criticism of the SSPX to V II that wasn’t constructive (though they were negative, as the matter deserves). Actually, I am still waiting for the minutes of the meetings with the Vatican to see who was more constructive. I think Archbishop Di Noia owes every conservative Catholic out there, because in my book a man is only as good as his word and the minutes of the meetings have been vocally announced. Let’s take the time to read it all and see who has the better argument and logic.

d) bases all analysis on a deep and wide theological basis.

This is offensive. It implies the SSPX has up to now not based her analyses on a deep and wide theological basis. From what I could read up to now, the SSPX shames every Vatican theologian you can care to mention, obviously starting from the Pope. But again, I am waiting for the announced minutes of the meeting to see who has the “deep and wide theological basis”. I bet three pints it isn’t the Vatican.

Personally, I’d say this new “smile offensive” from the Vatican can only be one of two:

1) Di Noia wants to make himself independent from Mueller (good!), and he is trying to establish his own negotiating credentials whilst, at the beginning, trying not to anger Mueller too much, lest he be drowned in yogurt. Therefore, unacceptable demands are posed, which in the meantime establish Di Noia as the interlocutor of the SSPX within the Vatican.

2) This is a remote-controlled Mueller initiative to, again,  try to drown the SSPX in yogurt: “you will have your recognition”, they say, “and you will be able to criticise VII. Provided, of course, you shut up.”

This is not the SSPX everyone of us knows, and the SSPX will not accept any “compromise” which silences them, even if they are able to do their own thing and criticise Vatican II in a very hushed way in the bargain. This is pretty much what is already allowed to the FSSP, and the SSPX  priests know why they do not join the FSSP.

I wish within the beautiful palaces of the Vatican they would start to accept that the decomposition of Catholicism in the West is the result of erroneous teachings, practices, and ways of thinking introduced during – and spread or magnified after and through – Vatican II. That, and only that, will be the beginning of the healing, whilst every Catholic insistence that V II be not wrong (a statement more ridiculous with every new day) is going to crash against the wall of orthodox Catholicism built by the SSPX, a wall that will certainly not be taken down against a promise of a reconciliation. Athanasius was never lured to compromise his position by promises of reconciliation.

Besides, Di Noia’s position appears contradictory in itself: “look what damaged goods we are”, he seems to say, “please damage yourselves with us and agree with our corruption, so that we can heal together”.

Again, more than a proposal this seems a provocation dipped in … yogurt. Still, this could be an erroneous rendition of those who made the synopsis.