The Pope And The Women 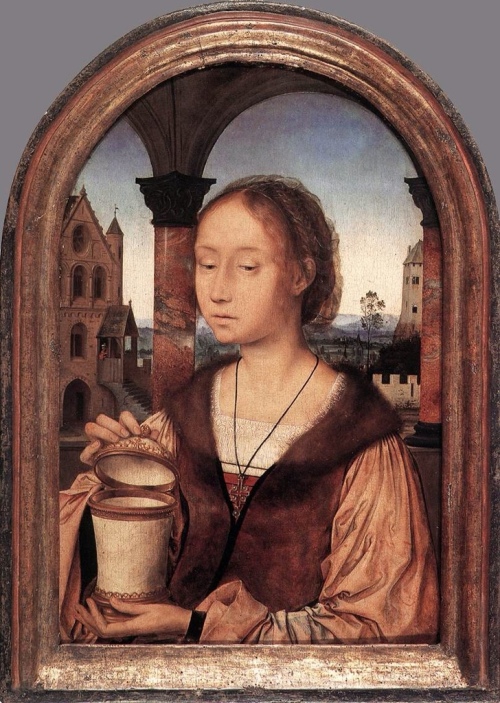 The text of the Pope's general audience is out, and whilst I think enthusiasm is way exaggerated, there are some good ideas I think we should stress.

The Pope is talking about the Resurrection. In this context, he points out that the Gospels deviate from the Jewish mentality of the time in that they do not deny it was women who first discovered The Lord had risen. This goes, continues the Pontiff, against the grain of the Jewish society, which would heavily discount whatever witness would come from women. This, arguments the Pope, is a further element of proof of the truth of the Resurrection: if it had been a fake, the fake would have been presented with all the usual attributes of credibility, including the discovery by men. This is, however, not the Christian thinking: The Lord entrusts the first human testimony of the Resurrection exactly to women.

Up to here it is all very fine; though I must say the mention of women is here merely an element of another argument: the historical truth of the Resurrection.

The Pope, though, goes now further than that, in that he inserts in the former consideration two beautiful elements:

1. The mission of mothers and women is to give witness of the Resurrection to their children and grandchildren.

This is beautiful. Actually, the more you read it, the more beautiful it is. It is so anti-feminist it would chill the blood in the veins of your average BBC bitch. If the Pope had chosen to make of this the subject of a homily rather than abandoning himself to liturgical abuses in the name of simplicity and inclusion, the true Catholics would have roared their approval worldwide. Unfortunately, the majority of the cafeteria Catholics wouldn't have liked it a bit; which is the reason why we had the media stunt and the liturgical abuse on Maundy Thursday, and get the right message during a papal audience and en passant. Still, one must say he did say it beautifully.

2. Women have a special role in opening the doors to The Lord, communicating His face through the strength of their love.

Here the Pontiff is, I think, enlarging the female horizon: it is not only the mothers, but every woman who, with her giving heart, brings the Lord nearer to us: I think here of the countless saints first, but every Italian will link this to his aunts and great aunts, to the old women in the neighbourhood going to Church early in the morning, with the (largely women) people he will see praying the rosary in Church. You think selfless devotion, and you think of women. I mean, the right ones…

This second consideration is in my eyes very beautifully – and elegantly – built upon the first. The end result is a Pope who might dispel some of the fears about his pontificate; provided he has made it credible that to him the orthodox reasoning is more important than the media stunt, and that he has learned from the reaction to his liturgical abuses before and after becoming Pope.

This Pope probably has, to an extent, the right thinking. Granted, he is no Fellay and a discussion with him about the value and innovations of Vatican II would probably shorten our life and increase our white hair; but the thinking is largely there. The big question remains, whether he will leave the orthodoxy for the general audiences only followed by a tiny minority of Catholics, or will have the guts to put this values at the very centre of his pontificate, rather than trying to please the world masses with the shallow show of destructive novelties for the excitement of the ignorant, the liberal, and the outright unCatholic.

Be Glad There Is The SSPX 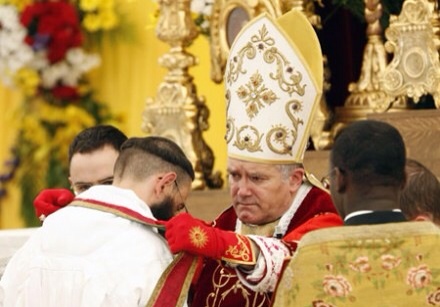 I have written only yesterday about what would have happened if the SSPX had been foolish enough to accept the Preambolo dottrinale in its latest version, which included the poisonous pills about the silent acceptance of Vatican II.

It is, perhaps, fitting to take stand on where – I think – the SSPX stays today, and why they should in my eyes congratulate themselves for having done the right thing back then.

I think the time will soon come when many who thought they could afford the luxury to criticise the Society will realise they can't afford this extravagance anymore. If this Papacy drifts towards the easy rhetoric and the avoidance of the difficult issues we are certainly authorised to fear, many will be those who understand the Church needs more than easy slogans, and it is time to show some charitable, but proper Catholic teeth. None does this better than the SSPX.

This is the more important because up to now I have noticed in Pope Francis' utterances a marked reluctance to frontally assault controversial themes. Please note that when the Pope wants to speak in defence of the poor – which he does, well, every time – he has no qualms in specifically and openly addressing the issue; whilst themes like abortion and sexual perversion are deemed to have been touched by some commenters, but have in fact been avoided up to now.

For example, the Pope intervened to defend Creation, and half an army of commenters was willing to remark that hey, Creation includes babies in the womb, so the Pope is speaking against abortion! No, he isn't: one speak against abortion by clearly saying that abortion is the legalised murder of an innocent life, not with convenient words about the very popular and utterly uncontroversial environment. Again, the SSPX does the clear talking admirably.

Then there is the matter of liturgy. Not only has the SSPX avoided a probable self-destruction by refusing to accept V II, but the FSSP and the other traditionalist organisations must be now overjoyed they did. If we look at the situation as it is, the continued existence of a dissenting SSPX is the only reason why the Vatican steamroller might not crush FSSP & Co., forcing the Novus Ordo down their loyal throats. Without the SSPX vigilant and ready to cry foul game – and to welcome, perhaps, the refugees – it is fair to say the moderate Traditionalists would very probably be all, liturgically speaking, on the death row by now.

Then there is the pure doctrinal matter. The SSPX have already publicly criticised the Pontiff pointing out to his V II, “dialogue” mentality, and will continue to do so. They are respectful, but pertinent. They cannot be dismissed as a motley crew of lunatics, and more and more people will understand in the coming years where real Catholic orthodoxy lives. They will be the wise cricket talking to… The Vatican Pinocchios about their mistakes, and will continue to rally and inspire admiration in sincere, orthodox Catholics. Once again, I cannot imagine a more powerful brake to the antics of the wreckovation supporters in the style of Cantalamessa then a strong and vigilant SSPX.

By deciding to stay put, the SSPX has been of excellent service to Traditionalism, to conservative minded Catholics and even to the common faithful in the pews. Many will continue to criticise them, whilst continuing to profit of their very existence. Many others will at some point understand what treasure of orthodoxy we have in them.

I think they are the biggest consolation sent from Heaven to help us overcome this difficult age. Long may it last.

A Tomb Does Not A Summer Make

Not fooling anyone: Jesuit Father Lombardi.

And so it came to pass that Fox News informed us we might be “appeased” because Pope Francis visited the tomb of St. Pius X. Let me spend two words about it.

1. Traditionalist Catholics do not want to be “appeased”. They do not care for token gestures, at least the smart ones among them. What they want is that Tradition be upheld. I am afraid simply visiting a tomb is not going to wash.

2. Pope Francis did not explicitly, or so to say exclusively, visited St. Pius X's tomb. In fact, he visited three tombs, the other two being those of Blessed John XXIII and Blessed John Paul II. Neither, I am afraid, with the best credentials in the matter of fight against Modernism, and I am putting it mildly.

3. Pope Francis' visit of the tomb of St. Pius X poses, in fact, very interesting questions. Being in Paradise, that wonderful Pope can obviously not roll in his grave, but I am personally in no doubt he would if he could. Journalists writing of Traditionalists being “appeased” should rather wonder what Pope St. Pius X would have thought of a Pope celebrating Pinocchio Masses when he was Cardinal, washing the feet of women and Muslims at Maundy Thursday Mass, disregarding the Missal with the same levity with which he disregards the script of his homilies, doing all he can to undermine Papal authority, and in general being too humble by half. Methinks, if informed of the existence of such priests that saintly Pope would have had very interesting words, and would have written an encyclical letter called Pascendi Dominici gregis.

4. Besides all that, I can't avoid noticing the token gesture isn't even a token gesture. The simultaneous visit of the tomb of two Vatican II Popes sends, in fact, exactly the opposite signal. Look – the bishop of Rome seems to say – I am paying some sort of tribute to the pre-V II Church; but make no mistake, I am V II through and through. Nor can the objection be raised that we are reading too much into the Papal – or should I say, to please Francis, episcopal – tomb visits, because when the Vatican issues a press statement about it, it is obvious none of the tombs was visited by chance.

5. The “profound spiritual continuity” (Fr Lombardi) with past Popes would in my eyes have been stressed far more forcefully by dressing, celebrating Mass, and in general behaving like them. One can't be new and old at the same time, disregard what they did but stress how right they were, pay homage to an anti-Modernist Pope and lavish praises on Modernist theologians (de Lubac and Meisner only in the last weeks; I do not doubt Teilhard de Chardin and Rahner can't be far away); it's all so Vatican II…

6. Dulcis in fundo, let us talk about poverty, which the Vatican Press Office stresses as a main trait of St. Pius X's Papacy (basically ignoring all this Papacy was about). Yes, Pope Pius X was known for the extreme frugality of his life before and after becoming Pope; but he never made a show of it, and never tried to undermine the majesty of his role as Pontiff's in order to show how humble he was; and he did so, because he was humble of that humbleness that does not need to be put on show. Besides, it is very fair to say the saintly man would have been terrified at the amount of statism going on today, and would have called compulsory wealth redistribution socialism and an open attack to Christian charity. This, the Vatican press office conveniently ignored.

And so it came to pass that the half token tribute to a wonderful Pope of the past did not fool anyone of the intended addressees, and the Vatican press office will have to come out with some smarter ideas.