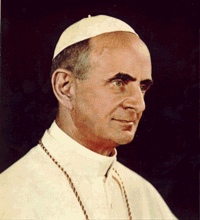 We have in the meantime become somewhat accustomed to robust words from the Holy Father. The one with ending up praying the devil if one doesn't pray Christ was excellent, and the one about the necessity to preach the entire Truth rather than only the convenient parts was also very good. Several of those observations have graced the site of Radio Vaticana, and the easily contented are all in a flurry. “You see? Your fears were nonsense – they say to us -. Look at what he has said, again!”.

I am very sorry to disappoint, but I don't think a couple of words will wash. Pope are measured mainly by what they do. Talk is cheap. Even Pope Paul VI was good at talking.

Yesterday we had another example of this attitude. A Pope calling Paul VI “great” can only fill us with dread, as if Paul VI is the example of how Francis wants to be Pope we had better start to dig our trenches now.

Still, the easily satisfied will tell us that the Pope has also said that Jesus can only be found within the Church, so we are all fine.

Strangely, the Pope did not explain how he intends to square his beautiful words of the present with his embarrassing deeds of the past. I seem to remember he wrote a book together with a sodomy -loving Rabbi who is a pal of his, and exactly how much Jesus is to be found in such a one he hasn't explained yet.

Of course – and as I never tire to explain – we can't automatically attribute to the Pope all the mistakes he made as an Archbishop. Still, a situation where his books full of the past mistakes are going to be published worldwide is a dangerous enough situation, and should prompt him to at least make some observation concerning the new duties and responsibilities of a Pope, & Co.. This would warn the readers from the danger of reading the reprint as if they were reading “the Pope's book”.

I don't see any of this. Not only has this Pope been perfectly inactive in front of the veritable tsunami of homosexual legislation now sweeping the Western world, but he doesn't seem concerned in the least about giving a properly coherent message. Rather, it seems to me this Pope says what pleases him on the day, but doesn't care that his words are either followed by actions, or the strident contrast between them and his past behaviour is explained. This way, he probably thinks he will give some fodder to the conservative pigeons, whilst taking care the henhouse continues to be solidly in the hands of the V II foxes. Cue Pietro Marini's astonishing words about sodomitical “unions”, still unchecked by him as I write his.

Yep, it's no surprise he thinks Paul VI was a great Pope.