← Insanity
The SSPX, The Novus Ordo And Us →

This little effort started publication as “Mundabor’s Blog” on the 18th July 2010, though some previously written posts also got imported in the new place. Amazing, that three years have gone away so fast. A sure sign of advancing age, I am told.

This blog is strictly a one-man-band. I never make “copy and paste” of other people’s content. I also do not allow free comment posting without moderation. The moderation itself is, as many of you have noticed, not entirely moderate. I also purposely use expression the “moderates” would find too strong, persuaded as I am that the day you start saying “gay” instead of “faggot” you start to lose, and the more you go down that road the nearer to persecution you get. Faggot it is, then…

You get from all of these elements that my blog certainly isn’t meant to attract readership, or to boost page views. Add to this that yes, I do “surly” rather well, and you get the picture.

The more surprising it is, then, that less than three years from its inception this little effort has reached one million pageviews; something entirely unthinkable in the summer of 2010, when a day with more than one hundred pageviews was a day of heavy traffic.

Why is it, then, that the blog of a rather touchy, short-tempered, emotional man with more than a streak of Mussolini (may he rest in peace) in him, and a rare penchant for making himself unpopular, has reached this eminently desirable blogging milestone in less than three years?

The answer lies, methinks, in the following factors:

1. This blog is written by one who really cares; who is neither a saint nor a martyr, but still tries to do his best with the limited intellectual and moral means he has at his disposal. I dare say even those who hate the writings must often recognise the good faith and honest intentions of the writer. Yes, possibly even the damn sods…

2. This blog is brutally honest, and allergic to self-delusion.  When I see something bad, I say it as I see it, because what is wrong is wrong even if there’s a lot of purple – or red, or white – around it. It may seem easy, but you will find not many blogs follow this logic, rather preferring the comfortable “how beautiful it is that the Pope has said buonasera” mantra. No clericalism and no papolatry, thanks.

3. In this blog you won’t find (as far as I can see) doctrinal bollocks. What stays here has hands and foots to the best of my ability, and I do not indulge in doctrinal experimentations whatsoever. What my grandmothers would have considered questionable doctrine, I do not write. What I think I can’t express or explain well, I don’t. My view of the world is stuck in the year 1958, and proudly so. I hope it stays that way. Whilst I am certainly rigid in my interpretation of Catholic tradition, I do not think there is any other way that really works.

4. This blog tries to be mildly entertaining, and to look at the tragedy of our times with some humour whenever its author manages to inject a bit of lightness in the drama we are living. Castigat ridendo mores is, I am sure, the phrase you are now expecting to read. I cannot avoid imagining that this trait is the one that moves the one or other of you to click your way to this URL every now and then. The times are certainly lamentable, but if I didn’t try to make the best of them I would be unworthy of being – proudly – Italian.

5. I do not allow “dissent” in my blog. As a rule, the “tambourine Catholic” posting here has his/her/its comment deleted without you ever knowing he wasted his time. When you click here you find only unadulterated Catholicism, without the endless debates between atheists/liberals who won’t get it, and orthodox Catholics who won’t get the former won’t. This is not a place for debate. This is the Internet charger for your Catholic batteries, the place where you take refuge and find peace in the Truth of Christ. Do you want dialogue? Pick a forum. My suggestion to the atheists, the liberals and the others is: shut up, listen, and learn. Not particular modest, I know, but I ain’t either. Call it rather ecumenical effort, Mundabor’s way.

6. The last but, of course, absolutely decisive element is, my dear readers, you. You who have had richly enough of the empty, shallow, outright childish, tasteless, senseless rhetoric of V II; you who are justly angered not only at the ways of the world, but at the betrayal of such a large part of the clergy; you who long for the Church’s return to sanity after 50 years of drunken quest for acceptance, popularity, and hipness. You are the ones who clicked the million pageviews, and you are the ones to whom my thanks for your affectionate support and encouragement goes from the bottom of my heart. At times I think that in the next decades our lives will be like an endless retreat from Russia, as our Western Catholic army is decimated by the cold wind of Neo-Modernism and the ruthless snow of the advancing Stalin Atheists. Even if it were to be so, let us stay together and encourage each other; let us march side by side until the day when this earthly struggle ends and we are able to look back at our sleepless nights, our faithful prayers and our impotent anger and know that nothing of it was useless, lost, or out of place.

These are, my dear readers, the reason why I think this blog seeks unpopularity, and grows like the US National Debt. I ask you, in your charity, to shortly remember me in your prayers as I do – collectively, of course – with you. The ultimate driver of this blog is the heavenly deposit account, where I hope you will want to deposit your generous prayers. One day, I hope the savings thus accumulated will help me to gain admission to what, I repeat it once again, is the only real aim in life: salvation.

Salvation that I wish to you all, again, with all my heart. 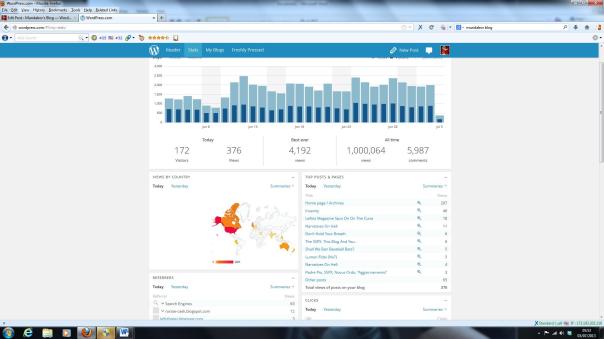