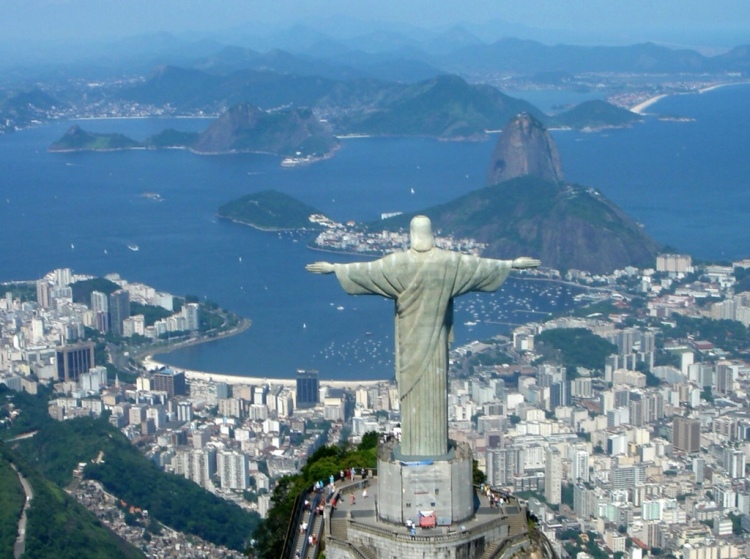 Pope Francis is flying towards Brazil, and one already has the appetiser served on one's Internet plate: populism galore and personality cult like it's going out of fashion.

The Pope managed the unbelievable feat of carrying one bag – yes, my dear readers, it is not a typo: one black office bag – on the stairs leading to the aeroplane. I am surprised he survived the effort. Such a show of humility, and fully unaware of all the cameras! It reminds me of Jesus when he washed the feet of women and infidels…

After this astonishing, life-changing event – it must have been, because the news is just everywhere, as are the pictures – the Pope gave another clear Indication of his Leitmotiv for the next week: captatio benevolentiae of “the youth”, with their shameless flattery at the expense of, basically, the planet. Too many young people have no job, he complains. Too bad. Perhaps he will order three or four hundred millions of jobs on the Internet to accommodate the youth's wishes?

Whenever I thought I have heard already every possible piece of nonsense from the Catholic clergy, Bishop Francis persuades me I was wrong.

No doubt, the next days will give us some useful lessons in how to reorder the world economies.

This from one who, by his first important appointment, could do no better than picking a sod.

And so it came to pass the Bishop of Rome decided a sodomite can remain, at least for the moment, at the head of the scandal-plagued Vatican bank, probably because… he is too humble to kick the man out and admit he has made a huge mistake, and the chap is his lunch buddy.

The sodomites within the Vatican will be rejoicing: in Bishop Francis they have truly found a valiant ally, with no fear of ridicule or damnation.

At this point there can, in fact, not be any excuses anymore, and those who have kept dreaming about the oh so innocent Pope may wake up and smell the coffee. The crude reality of the matter is that even admitting the Bishop of Rome was not informed beforehand, he is most certainly informed now and is still doing nothing.

At this point, yours truly allows himself to say the Bishop's reaction does not allow one to exclude he was informed about Ricca's tendencies all right. If Bishop Francis had been duped, the only reasonable reaction would have been to immediately suspend Ricca and start an investigation about who kept information from him, and why. He does not do anything of the sort, and as I write “homo lunch buddy” remains at his place. Reach your own conclusions.

The best that can happen now is that Bishop Francis has given Ricca the opportunity to resign whilst he himself is in Brazil, in order not to give the impression the Monsignor got the boot from Francis. But even if this should happen, it would leave the Bishop's credibility – provided he ever had one – in tatters, being in front of serious Catholics the world over the man who puts his personal buddies before the reputation of Holy Mother Church.

As I write this, Bishop Francis is on an Alitalia aeroplane headed towards Brazil, where he will be for several days the object of deafening praise and worldwide flattering. He may well think he can, after all, leave everything as it is, waiting for the press to forget the matter.

If this is what he thinks, he is even more dangerous, and more arrogant, that I ever thought possible; and God knows I am not one of his admirers.

Still, the only reasonable hypothesis at the moment is that Ricca will be allowed a graceful exit from his position at the IOR, as everything else would be the purest madness.

As to Ricca he should, of course, be speedily defrocked.

Someway, I find it difficult to believe this is going to happen.

The head of the Bishop's Conference in Uruguay confirmed the past of Monsignor Ricca, thus exposing once again the astonishing incompetence and unbelievable arrogance of the Bishop of Rome.

Father Lombardi has just finished to assure us Bishop Francis was, in fact, informed about the accusations, but found the sources “untrustworthy”. Strange. This a man who calls his newsagent to ask him to stop the newspaper subscription (living on Mars, the poor man couldn't know) but does not call his own people in Uruguay to ask what is what.

Add to this that for a high prelate to be forced to let the Bishop of Rome lose face in such a brutal manner the evidence against Ricca must be crushing, and probably growing by the hour. If this had not been the case, the Uruguayan prelate would have simply stalled with more neutral formulations like “we are looking into it”, or the like. Instead, the “dark past” of Monsignor Ricca was confirmed.

What does this tell us? That the Church is led, in the best case, by a rather childish man; one who appoints his lunch buddy to an important position, a person whose most important banking qualification consists in having run three hotels, and perhaps some accountancy skills; then runs into full denial mode when he is gently warned from several sides (south American Nuncios, and a professional magazine) that the appointment of the lunch buddy was a disastrous one; then, when the scandal explodes, reacts by having the press accused of being “untrustworthy”. I know who is untrustworthy.

The Germans call this Realitätsverlust: loss of the sense of reality. Exactly this is what is happening to Bishop Jorge, who thinks throwing toys out of the pram is the best way to react to a serious crisis.

We must face the sad reality that the Church is led by a man whose incompetence is only equalled by his arrogance; a man who talks a lot about humility, but whose actions show that he does not have a shred of it; a man who is digging his own grave every day with great alacrity, and has possibly not even begun to notice it.

Lies have short legs. To send Father Lombardi out to say the untruth (and I am being charitable) in front of the world press when every child must have known that this house of cards would tumble in a matter of hours is just plain delusional.

As I write this, Monsignor Ricca is still at his place. I expect a decision to be announced before the Bishop of Rome boards the plane to Rio. Even Bishop Jorge must know he is now in full grave-digging mode, and he must get out of this fast.

Heavens, at some point the loss of reality will have to stop.

Still, the cover of “Vanity Fair” was most surely deserved.