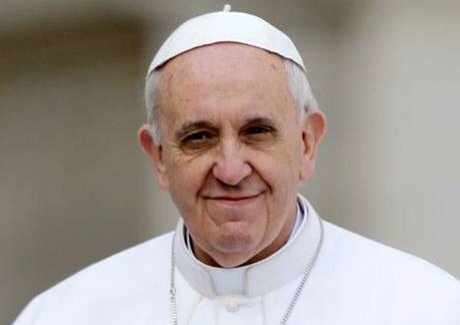 There is no week now without this disgraceful man reaching for a new deep from the gutter in which he has already put himself.

Once again, the immense scandal he causes is born from his being so much in love with himself, that he cannot resist “humbly” making the world new in the presence of journalists. This time, we had 80 minutes of off-the-cuff “Francis show”, and if you have already photographed the arrogance and ignorance of this man – if you read this blog, it is probably because you have – you know that 80 minutes of Bergoglio Show can’t be good for Catholicism. More alarming still, is that the off-the-cuff remarks show how this man really thinks.

The Neo-conservative press is now desperately trying to spin the immense stupidity (or evil intent, or a mixture of the two) of this man; but you can spin as much as you like, the man is a plague.

Let us see what kind of subversive bollocks a Bergoglio can spit in one single day, when he feels in good form.

If there is one, Francis hasn’t seen it in the Vatican ID card. Besides the absurdity of the statement, this is so gay even Elton John – an admirer of his, you must know – must see it that way.

Seriously: what a stupid, stupid, stupid thing to say. What an insult to the intelligence of every sane Catholic. What unspeakable arrogance. The Bishop of Rome is here clearly being the best ally of the “gay mafia” within the Vatican. He has clearly exposed himself as their man, elected by them so that he may not do anything against them, and help them.

Please let us wake up here. First important appointment is the one of a sodomite with levers everywhere within the Vatican; when a huge scandal involves this man, Francis refuses to get rid of him; then he proceeds to downplay the whole issue, so that he can be free to help his sodomitic friends without too much nuisance. Make no mistake, Screwtape would be delighted with Francis.

Innovating on 2000 years of Christianity, this extremely confused (or worse) man wants us to believe being an homosexual is something that doesn’t stay in the way of being a priest. This shows you, better than anything else, how deeply rotten this man’s thinking is. I wonder if he would say the same of people with a tendency to screw their own mother, or dog, or niece. Either the answer is “yes” (and then this man’s mind is profoundly perverted in all matters of sexual abuse) or it is “no” (and then this man’s mind is profoundly perverted concerning the matter of homosexuality).

The moral of the story is that for this man, provided a homosexual is not part of a “gay lobby” (which he would allegedly not spot anyway; see the ID wannabe joke) not only can he be a priest, he can be one of his strictest collaborators, and who is he to judge?

Francis’ Christianity, and requirement for priesthood, ends by “accepting The Lord and having good Will”. Welcome, perverts the world over. The priesthood awaits you.

Some people (like Jimmy Akin, who today makes a quadruple salto trying to defend the indefensible; I think we’ll see a lot of this in the years to come) will even try to sell you that, formally, Benedict’s explicitly stated policy of not allowing homos to the priesthood will not be touched. How can this be? If this is the example he gives; if this is the way he talks; if this is, very obviously, the way he thinks, how can this be?

Compared with this man, Pope Paul VI is merely an amateur. This here is Screwtape’s real deal.

You may or may not know that a good Catholic has traditionally had the faculty to pray for the painless death of the Pontiff if he is persuaded the Pontiff in question is a disgrace for the Church – as you can see, nothing new under the sun – .

I have a huge problem with praying for the painless death of Bergoglio, because in my naïveté something within me rebels to the idea of wishing the death of a Pontiff.

Still, the times are such that a Pope may well step aside if he finds himself in the physical impossibility of working as Pope. I have written in the past that I consider Benedict’s decision – seen in isolation – a wise one. If a Pope can’t make it, than he should not make it either, and leave his place to someone with the necessary strength.

You decide for yourself.

I start praying for the end of Bergoglio’s papacy today.