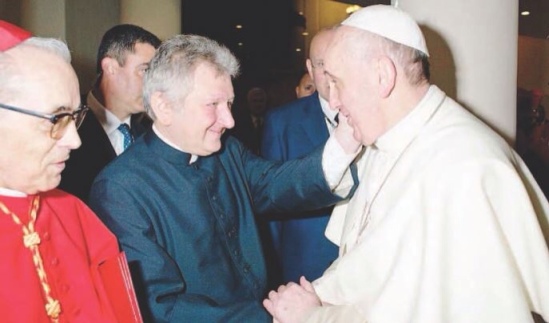 A few days after his return to Rome, Pope Francis was more clear. He had the secretariat of state informed that Monsignor Ricca “will remain in his position.”

And thus with him there will remain intact the glaring contradiction between the work of housecleaning and reorganization of the Roman curia that Pope Francis has repeatedly said he wants and the “prelate” of his appointment in whom he continues to place his trust, a perfect emblem precisely of those scandalous behaviors and of those “lobbies” of power which should be swept away.

One has to like Sandro Magister. In these times of shameless brown-nosing of everyone who is popular – Bishop of Rome absolutely not excluded – he is the only one among the worldwide respected and followed voices who says very clear that Bishop Francis keeps giving scandal and still doesn’t get it.

In a long article, Magister says very clearly that the King – or I should say, the Bishop – is naked. I find it particularly noteworthy that whilst the article mainly deals with the other scandalous appointment of the questionable woman from Calabria, Magister does not forget to keep his readers alert to the permanent scandal that is the support the Bishop of Rome continues to give to the, again, scandalous sodomite in the highest ranks, and an appointment of his very modest self.

Whilst Michael Voris avoids real criticism, Father Z looks for positive news with an ever more powerful magnifying glass and the varied progressive troop with a varnish of pretended conservatism swoon over how cool sacrilegious beach masses are, Magister points out with a rather stringent logic to two of the biggest problems of Francis: a) making wrong decisions and b) refusing to correct them when they explode like hand granates just very shortly after he has released them.

The hubris of this man is impressive, if not very humble. Once he has made a gigantic cock-up, he takes refuge in “not judging”, and certainly not acting. It should not be seen that the… bishop of Rome has made a rookie’s mistake; actually, already very many of them; and he Seventy-Seven.

Either Francis is so much in love with his public image that he thinks it worthwhile that the Church suffers every scandal for the sake of his own popularity; or he is so much the obedient puppet of the sodomite mafia that he does not dare to cross them; not even when the filth is there for everyone to see, and the stink goes up to heaven.

Kudos to Magister, then, for the very special act of courage of reminding his readers of how Ricca represents all that is wrong with this papacy; a papacy so wrong, that it doesn’t even want to be called with its own name.

Syria, The Christians And The Liberals’ Double Morality

When G.W. Bush bombed some sense into Iraq without any definitive proof of massive chemical weapons held there, the entire socialist/pacifist/alternative/perverted world couldn't feel good enough condemning him. Mind: Saddam was a man whose cruelty was above suspicion, and who had already practiced genocide on a terrifying scale. The most dangerous man on the planet, bar none.

This time there is, again, no smoking gun that the Syrian regime has used chemical weapons; the scale of the alleged attack is, for what it's worth, infinitely smaller; and yes, the Syrian government poses thousand obstacles to a proper analysis of what is going on; but so did Saddam. And yes, they probably did it; but so Saddam wanted everyone to believe – inside and outside his country – that he did have the potential for devastating, genocidal attacks.

One begins to notice. When “hope and change” bombs away a regime without proof, everything is fine. When Dubya does the same with an infinitely more dangerous opponent, he is the Cosmic Bastard.

Mr “Hope and Change” will bring on the wrongest possible change, and possibly put the Christian in Syria in a hopeless situation. The Western intervention will bomb, first of all, the hope of Christians in Syria for a peaceful life.

I can't avoid thinking the intervention spells the end of Assad's regime. I will not cry for the bastard. I will cry for Syria's Christians. Even bastards have their use.

And no, I do not condone the use of chemical weapon. If I were the POTUS, I would help Assad's regime so they are not in such dire straits as to use them. If it means being on the same side as Hizbollah, amen to that. You can't have Christians killed and forced to flee just because you don't like Iran. A strong Presidency would have dozens occasions to punish Iran without Syria's Christians being put in such an Islamist hell as the one that will reign – though the BBC won't tell you – after Assad's gone.

Yes, there are risks in this. There are risks in pretty much flippin' everything one does in the region. But heavens, if Western powers do not have an eye for the situation of those poor Christians in Syria, in Egypt, in Lybia, in Iraq who will care for them: the Islamists?

Comments Off on Syria, The Christians And The Liberals’ Double Morality

Unfortunately, the sign on the front door of Zenit wasn't really noticed.

“Invented from alpha to omega” is how Archbishop Gaenswein described the rumours about the Pontiff Emeritus' alleged “mystical visions” (many of them).

I have already dedicated a blog post to this, and warned from falling into the trap of those fake Catholics trying to create a new Magisterium, made “infallible” by the Holy Ghost's alleged endorsement of Pope Francis.

Well, now it's official. From the mouth of the de facto speaker of the Pontiff Emeritus himself.

This reminds me of the idiot who left a message in my combox accusing me of being so evil that I do not read the signs of the Holy Ghost, and blasphemous in stating that God is immutable (never read Aquinas, of course).

From the rumours they are ready to believe you will recognise them.

I expect abject apologies from Zenit, who first spread the rumour. I personally would also be interested in knowing the source of this revelation, because the suspicion the sodomite mafia had a finger in this is more than legitimate.

I somewhat doubt either will happen.