Bishop Francis Has No Time For Protocol

The beautiful (at least in these parts) summer 2013 is going to an end, and after the summer pause we must make ourselves strong for another series of antics from the bishop of Rome, Francis.

Francis has, says the Telegraph, no time for protocol. Instead of having visitors bow to him, he bows directly to them, lest they should think the head of the Catholic Church is someone worth bowing to. So happened with the rather fetching Queen Rania of Jordan, on visit to the bishop in white.

Once again, we must draw a very simple lesson: Francis does not care for the papacy. He does not care of how the office is perceived. What he is interested in is that he himself may look good, modern, simple, and oh so humble.

One shudders at how bad must have been all the Popes of the past, who insisted on the particular position of the Successor of Peter being stressed at all times. They had times for protocol, for proper clothes, even for Beethoven!

Apparently, they knew that symbols are powerful; that who bows to whom is a very important question; that the one who bows to the Pope shows respect to the office, not to the man. They knew that these matters do are important, which is why they, like the rest of the planet, had time for protocol.

Francis hasn't “time” for these things, and he is “not interested” in protocol. Francis is interested in the perception of Francis, the man. A couple of days ago he showed up at a meeting in Rome with the now famously “humble” Ford, without even a Vatican registration number. He also appears to have entered the church with – refers the “Homograph” – his folded mitre tucked under the right arm. As if he were embarrassed by it, or thought it just superfluous.

I wish I could.

One who is more and more embarrassed of any visible manifestation of being a Pope should, if you ask me, ask himself whether he should, or is fit to, be one. One can't be Pope and demand that he be considered just to a nice uncle. The reputation of the uncle may well increase, but the importance of the office can only be damaged. One does not have to be a genius to understand this, or an experienced diplomatician. Francis has lived in the corridors of power for many years. He knows why people bow to the Pope.

He is simply interested in the uncle, not the Pope. 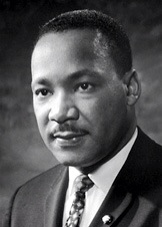 The change he wanted was not exactly Obama's.

If you are the conservative oriented chap, it is always fun to observe the left's highjacking of people of the past who would, today, very probably not support them.

Take Martin Luther King, the determined civil rights activist and, strangely enough, Protestant pastor. Whilst MLK's record as a minister (small m) would not stand the most lenient moral standards of today (unless he were homosexual, that is; in which case a “progressive” Presbyterian community would be certainly found for him), it is fair to say he believed in God and in the sanctity of human life.

King was killed before Roe vs Wade, but there can be no doubt he was what we today call “pro life”. I am not even sure the expression existed in those times, and I actually am inclined to think the word was born only after it became necessary to find a way to express the bleeping obvious: that to kill a baby in the womb is murder.

It is, therefore, very apt one of MLK' daughters reminded us, during the celebrations for her father, that MLK was – obviously, I hasten to add – against abortion. I can't imagine the day he died there were many who would call themselves both Christians and “pro-choice”.

Even better is that his descendants hasten to make this point heard, with one of his daughters (apparently “Bernice”, perhaps “Berenice”?) making clear that life begins in the womb, and a niece of him, Alveda, making clear Obama's stance in favour of the genocide of – disproportionately blacks, by the by – babies in the womb is the reason why she would not vote for the Gay President.

I doubt the pro-life stance of MLK got a vast echo in the liberal media during the celebrations; but from the other side of the Pond one notices once again how healthily the pro-life movement is growing. Here in Europe we are very far from either the level of debate or the aggressive legislative measures of many parts of the United States. May they grow stronger in the years to come.

It's a long-term project. The process of de-nazification of a nation can only be carried out by caring for the new generations to grow up denazified; not many of those so horribly brainwashed during the last fifty years will change, at least consciously, their mind during their lifetime. Our best bet is in those, well, not aborted this year, rather than in those who have, well, aborted yesteryear.

You can have dreams only if you were born in the first place. If you are murdered in the womb, the only “change” you'll ever experience is atrocious suffering, following by your death.

“I have a dream”, would the baby in the womb say; “that I am not murdered before seeing the light”.

It's too bad for him that hope and change are in power.

I had thought that in a world so stupidly perverted as to even contemplate the possibility of a man “marrying” another man (or a woman marrying another woman) pretty much everything would be possible, like marrying one’s own dog (copyright: Boris Johnson, London’s Mayor).

But in another tragic example of how reality overtakes fantasy, we are now informed a woman decided to marry…. herself.

Whilst the news is reported with the tongue-in-cheek attitude one would expect, I am not entirely sure there isn’t a deep logic in this.

First of all, the thing cannot have been made in jest. Dozens of people invited; eleven-years-old child saying to her mother he is embarrassed for her (good chap; there are hopes) and real, “solo honeymoon” to be paid with real money. Most of all, no sane person would push a joke to this level of insanity. At this point, even…

Comments Off on Woman Marries… Herself!