Paving The Way For Anarchy?

It is, as always, difficult to know what generic affirmations really mean – better said: you know what they mean; you do not know to what extent the intent will become concrete action – but if what is brewing is what is hinted at in this “Homograph” article, we are in for a mess on a planetary scale.

The core is issue is the one described below:

“Cardinal Maradiaga is hinting that the Pope is asking the fundamental question: What can be decided in Rome and what at local level? How can the Roman Curia serve bishops instead of being an office of censure and control?”

1. The Roman curia should “serve” the Bishops. I thought the Roman Curia should control them and pay attention that they transmit the faith whole. A huge shift of power might be taking place here, with the dioceses making their own soup according to local recipes and Rome not daring to question either the nourishment or the flavour.

2. The very same fact that today Rome direct things is seen as “censure and control”. For the avoidance of doubt, both have here a negative connotation. It is bad that Rome controls, and it is bad that Rome censures. Rome’s power of control and censure must be, therefore, reduced.

You see already where this is going: a paradise for Pinocchio liturgists, where everyone makes things according to what the “Spirit” decides it is “best” locally, and the Pope happily presiding over this liturgical and doctrinal cacophony whilst kissing people on wheelchairs. Those from whom the worst problems have come (the local liberal dioceses) are then set free to give their own shape certainly to the liturgy, and probably to important parts of the teaching; like, say, not being “obsessed” with this, or being “dynamic” on that (communion for “remarried”, say).

Too clever by half, Cardinal Maradiaga tries to impress us with the example of the Japanese, a language which almost no one in the West masters. But his little kindergarten trick does not hide the fact that if the Vatican can’t decide over the very words with which the Latin blueprint must be translated in the local languages, abuses of all kinds will soon mushroom in all liberal dioceses, creating a confusion of almost Presbyterian proportions in perhaps less of a generation, or until a Pope decides to go back to sanity again.

What appears immediate in the Liturgy – and the example of Cardinal Maradiaga directly refers to it – must perforce be true in the teaching: Lex Orandi, Lex Credendi. Make a mess of the liturgy and the theology will go to the dogs just as surely. Look at the … bishop of Rome of the Pinocchio Mass and tell me if his Lex Credendi is any better than his Lex Orandi.

We will see how much of these, admittedly, easily said slogans are going to be translated in practice. Still, Francis had, for example, already hinted he would prefer heresies and dissent should be dealt with at diocesan level – by the heretical and dissenting bishop, it is to be supposed -, so one seems to understand where he comes from and what his idea of orthodoxy is.

Early days, and I might be wrong; but it seems to me that a program of dismantling of what, inefficient as it is, is still the most effective brake to heresy – a Roman curia with the power to intervene everywhere, and decide about the details of the liturgy – is being implemented with a true revolutionary spirit.

Some of you will know Che Guevara was, actually, Argentinian.

Better Ten Alexander Than One Francis 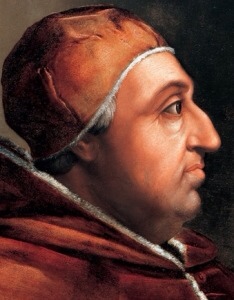 For some reason Rodrigo Borgia, better known as Pope Alexander VI, seems to have reached the status of “worst Pope ever” among Catholics and Anti-Catholics alike.

Whilst the man represented many of the shortcomings of his age, and not even nowadays’ spinmeisters would dare to call him a saintly man, it is remarkable how the man allows Popes like Liberius, or Benedict IX, or John XXII to go unnoticed among the masses. Actually, in most cases if people don’t shoot at Alexander they will shoot at, say, Julius II or Leo X. All Renaissance Popes, you see. It catches the imagination. Sex, War, and Sacred Music. Still, all orthodox ones.

There is, if you ask me, a frequent mistake here, present in a rather extreme way: the confusion of the moral qualities of a man with the way he exercised his office.

No one seems much interested in the fact that, say, Churchill drank like a fish. What they are interested in is how he did his job as Prime Minister, and his private failures are considered a private problem of his exactly as his public work had a very public dimension.

A corrupt Renaissance Pope certainly did put his soul in danger, and certainly did go to hell if he died in state of mortal sin. We cannot know with certainty about anyone of them – not even of Alexander VI – but the impressive string of very bad Popes between, say, the X and the XV century allows us to tell that very probably a number of them did not escape hell.

Such a bad Pope lost, then, his own soul. He did, in case, contribute to the loss of many other souls in his entourage. But in those times there was no Internet or Facebook, no Twitter or even CNN, not even much literacy. The private failings of a Pope were specifically known to a restricted number of people, most of them of the educated sort. Still, most people died with the same faith, the same rules, the same Mass and the same certainties with which they were born. Their world revolved around the Truths of their Faith, with which no Pope dared, or even thought, to tamper. In the economy of their own salvation, the private conduct of the Pope was pretty much near to zero.

Yes, the peasant might have known that high prelates were corrupt, but it’s not that he did not have experience of corrupted powerful men in his own environment – or that he was an angel himself, in most cases -. Yes, it might be said that the corruption of the Church was an element in the march of the great Heresies of the XVI century; but again, every illiterate peasant knew, when he rebelled to the Church, what he was doing, and note no one was more justified in being an heretic then than he is today, and many clergymen and Popes were very corrupted for many centuries before the XVI. Again, the private conduct of the Popes did not enter the life of the common people. They knew God’s rules applied to the powerful clergy as well as to everyone else, and that was rather the end of it. Wise people. They knew Alexander was orthodox; and if he had not been, I doubt they would have had any knowledge of the fact. Still, orthodox he was.

Fast forward to these disgraceful beginnings of the XXI Century. The Pope has, it can be safely said, no mistresses and no illegitimate sons; he does not lead an extravagant life; he is certainly persuaded, “in conscience”, that he is a good man. I cannot imagine he has many fears about his eternal destiny, something Alexander could at least be worried about.

Still, this man will contribute to the loss of millions of souls; he reinforces heretics and heathen in their conviction that there is no need to convert; he downplays the doctrinal solidity of the Church at every step; he leads people to believe they can be saved by merely following their conscience; he tells them they should not be “obsessed” by abortion and homosexuality; he tells everyone there is no need to evangelise; he gnaws and scratches at Catholicism in thousand little and less little ways, some of them clearly heretical, some of them merely stupid; in short, with his intellectual pride he gives scandal and confuses the faithful day in and day out, not with his private conduct but certainly with his public one.

I do not doubt in all ages past most people would have told us a Francis is infinitely more dangerous than an Alexander. More still, they might have had difficulties in even understanding the question: the privately corrupt people were part of their everyday experience, but a Pope behaving like Francis must have been, to them, simply inconceivable.

There can be, therefore, no doubt Francis is much worse, much worse as a Pope than every “Renaissance Prince” you might care to mention; in the same way as a Churchill is infinitely better than Chamberlain as a British Prime Minister irrespective of any private virtue the latter might have had.

I am not very interested in the private conduct of a Pope. Not much more, anyway, than I am interested in the private conduct of Winston Churchill. Every soul has infinite importance. Therefore, the salvation of a Pope isn’t more important than the salvation of Mrs Bridges, the pleasant neighbour of number 23. But think how many millions Mrs Bridges Francis is encouraging on the way to perdition. Pope Alexander was certainly corrupt and scandalous as far as his scandals could go; but Francis has unwittingly – but very arrogantly – made of himself a damnation machine on a planetary scale as his intellectual pride allows him to attack and sabotage Truth at every step and even persuade himself he is doing the right thing. He is, after all, following his conscience. Sounds a bell?

No. Keep your Francis, and give me ten Alexander VI instead, any day.