Once again, the “Eye of the Tiber” has a shocking revelation that will not fail to alarm us: the good old (particularly: old) V II, accepting, welcoming crowd.

I am told episodes like the one mentioned are getting more and more frequent, albeit with the change at the top this might grind to a halt very soon. I am dreaming of a Jesuit Renaissance just now.

It is worrying, really. To see the Church coming back to the old intolerance and homophobia of Jesus' times would be very sad indeed. It would be like saying the Holy Ghost is not anymore in favour of V II and has… changed His mind!

(No, wait… there's something illogical going on there….

Let us pray with soprano voices – the men too – that all those may soon end.

The Church must stop obsessing about the old things and focus on the real emegencies: youth unemployment, the loneliness of the old people and the buses coming two at a time.

Let Us Not Get Accustomed

I do not know you, but I have the impression the current Bishop of Rome is of the opinion if he behaves like a lunatic for long enough the world will end up thinking that lunacy is the new normality, as least as far as Popes are concerned.

I refuse to judge (I use this world on purpose: as an intelligent being, I am not exempt from the duty of forming a judgment concerning what I see around me) this Pope any differently than I would any Pope of the past.

Therefore, I will continue to be scandalised every time Francis gives scandal or does something very stupid; and if he does it every week, then I will complain and, yes, “judge” every week.

This Papacy – and if we are unlucky, those who will follow it – might reach unimagined lows yet, and it has already reached lows unimaginable eight months ago. But this does not mean we must ignore or downplay Francis' antics by simply saying “oh well, you know how he is…”.

Wrong is wrong even if the wrong is repeated every week, and scandal is scandal even if less grave than the scandal of last week, or of the next one.

Let us not get accustomed.

Suggestions For The Age Of Buffoonery. 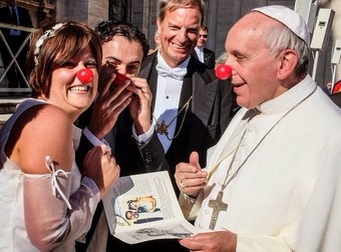 As we live in an age of obvious buffoonery, where even Popes care more for their own popularity than for the dignity of the Petrine office, I allow myself to suggest the following measures. They will, no doubt, greatly increase Francis' popularity among the dim witted.
1. Francis as singer by the “X-Factor”. I'd suggest “Don't cry for me Argentina” as best suited.
2. Francis as judge in a tango competition. Make no mistake, he'll enjoy that.
3. “I am a Pope, get me out of here”. Live from the Papal Apartments. The Dalai Lama and Rabbi Skorka as participants to promote ecumenism and add diversity. Eugenio Scalfari will be asked, too.
4. Peter Tatchell invited to the Vatican. Monsignor Ricca can make the introductions. Tour of the “gay sauna” establishments around the Vatican (strictly without Francis).
5. Demise of the white clerical habit. Jeans and trainers instead. Variations according to the occasion, e.g. Rainbow sweater when receiving Tatchell, “What Would Jesus Do”-hoody with the boys of the Favela, a more formal blue blazer and khaki trousers combination – the trousers with crease, but no tie – to receive Mr Putin.
6. WWD: World Wheelchair Day. Ten or twenty thousand wheelchairs in St.Peter's square. Francis can review them like a general his army. Frequent getting out of the Renault 4. Insisted embracing and blessing of those with the worst diseases. Photographs near at all times.
7. Putting on a red clown nose to show his support for Comic Relief. They help abortionists and, I am told, homosexualists, but who are we to judge. Tatchell is a friend of Ricca anyway. At least they have similar taste.
Oops. We have that with the red nose already. See picture. Apologies.
8. Francis as Father Christmas. They will be delighted at the HuffPo. So much “in touch”.
9. Francis on all four playing with ethnically diverse children of all religions and none. Scalfari's grandchildren – or their children – could be an excellent idea. Parents present at all times.
These are merely some short suggestions off-the-cuff. Francis' media advisors will certainly be able to improve on this.
The goal must be twenty million Twitter followers in the next three months.
Welcome to the Age of Buffoonery.
Mundabor

Once again, on the 11 November two minutes of silence were observed at 11:00 am to remember the dead of the United Kingdom in the armed conflicts of the last century.

Another impressive and moving demonstration of how powerful silence is.

Silence is a simple and very effective way to give honour. If you want to sabotage what is honoured, you can very effectively do so by sabotaging silence.