“Repubblicagate”: Who is The Culprit? 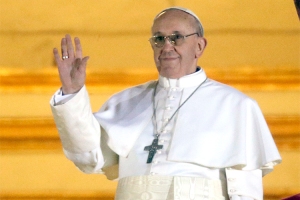 The Emperor has no Mozzetta.

Let’s keep this short: the culprit is Francis, and no other.

It’s very easy to see why.

1. Not even an old incapacitated nincompoop would shut up after the interview instead of immediately saying, very loud, “this interview does not reflect our conversation”. There is no way in hell Francis can escape his responsibility on this. He even received the draft of the interviews, for heaven’s sake. What was he doing, watching the photos of Ms Chaouqui?

2. Many have tried to depict Scalfari as the old man in his dotage. Very wrong. Firstly, it is clear to everyone who is not gaga that Scalfari isn’t. Secondly, it makes sense that Francis would demand that the interview would be made without a recorder or a stenographer. A recorder would have implied Scalfari does not trust the words of a Pope, and a stenographer would have recorded all the inordinate rambling of the man. Notice when Francis rambles we only get the doctored versions, in which charitable souls try to give some sense to the rambling nonsense. If we read the literal transcription of a 30 minutes Francis’ performance, I think the entire planet would be rolling on the floor, laughing.

3. Francis received a draft, and gave the green light to it. This has been admitted from Vatican sources, who had to invent the pathetic excuse it is not clear whether he read it after Repubblica had to say – confronted with the brazen attempt to deny reality – that he bloody well did. There can be no excuse. There is absolutely nowhere to hide. The emperor has no clothes. Period.

4. Scalfari is a journalist. He knows his trade. Whatever was agreed between the two, he will not reveal unless, perhaps, attacked personally. If Francis says “please no recorder, but do not say it was on my request”, Scalfari will make the interview with no recorder, and will not say this was on Francis’ request. Don’t insult your intelligence thinking – or worse, saying – he forgot his recorder home and is unable to take notes.

5. In part, Francis’ interview echo scandalous affirmations already made by him, and which he merely confirms (“And I repeat it here”). How many times is this man misunderstood, and since when has he become unable to read?

What has happened is that 1) Mueller has insisted that the interview be removed as far too obscene, as reported by the media, when he was informed – to his surprise – that it was still on the internet site, and b) Francis had to see it was better for him to have the thing taken down now, than for it to be left on the Vatican site as a permanent monument to his own heresy and incompetence.

He has nowhere to hide.

I have already said, and I repeat it here (see how it works?) that there is crushing evidence that Francis approved the interview, and there is no evidence Hitler ordered the Holocaust.

If you are so dumb as to think Francis did not want this interview as published, you can as well believe Hitler did not want the Holocaust as happened.