← “Queering” The Church
The Nazi Next Door → 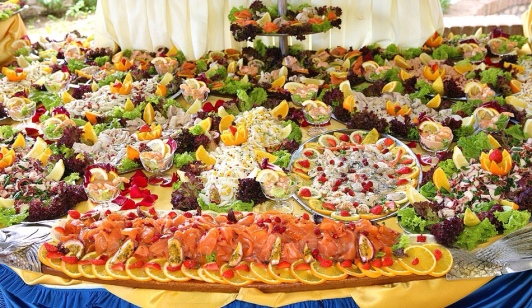 Let us imagine the Church in the US were to say that from now on a free “all you can eat” buffet will be offered to the pewsitter after Mass.

Would there be an increase in Mass Attendance? Probably. Would this be the result of more people embracing the values of the Only Church? Nope.

Already this would be enough to silence every supposed “argument” concerning the increase in Mass attendance that has come from certain probably not entirely disinterested corners. If you take Christ out of the Church and tell them church life is a party, you will get the ear of those interested in partying. With his kindergarten version of something that is not anymore recognisable as Catholicism, Francis has done exactly that: getting the ear of those eager to delude themselves their way of living is fine, and the enthusiasm of the enemies of the Church.

But has this led to, at least, an increase in Mass attendance? No. It just hasn't. Notice, the news is launched from a liberal site; that is, from the people who desperately need to sell this Pope to the masses in order to promote more church devastation. This is no good news for them, for sure.

Surely the US, a country with 60 or 70 million Catholics, is big enough as a statistical sample of the West at the very least. The more so considering that this country, plagued by a huge number of CINOs, should have reacted extremely favourably to such “party time”- announcements, leading to an army of people formerly feeling “rejected” (or so they say) now enthusiastically embracing the end of the age of “narrow-mindedness”.

Alas, it's not happening; and it's very easy to see why.

By all talk about “peace and joy” in the expectation of an unavoidable salvation, as long as no seriously edible buffet is offered most will prefer to go to real parties – or simply to go on with their lives – rather than going to Mass. And why wouldn't they? If salvation is open even to atheists and following the individual conscience is all that is required, the only requisite will be that one's conscience does not demand – with implicit Papal blessing – that one attends; and if one happens to be an Atheist, his despise for the Church and his general unbelief will only grow and be reinforced by the praise of a Pope so much out of tune with Church teaching. They will like, perhaps, the man; they will certainly think even less of the Institution. Most certainly, they will not feel motivated to give Christianity a second, hard thought.

The Francis effect is the V II effect on steroids, and it will yield in the end exactly the same dividend: the banalisation of everything Catholic in the hope of awakening an interest that will never materialise, whilst the Church slowly disappears as a mass religion, and Christianity as the defining religion and mindset of the West.

Such are the fruits of Vatican II. The remedy to such a disgrace is not to further dumb down everything Catholic – embracing a man in a wheelchair every now and then – but rather to recover in its entirety the message preached everywhere before the disgrace of V II.

I am persuaded that the best and fastest way of doing this is to ditch V II in its entirety, making tabula rasa of everything that has come out of it and has happened after it: the new liturgy, the encyclicals, the catechisms, and so on: in short, everything from the children's books to the Ford Focus.

There is no aspect of Church life for which an extremely rich Church tradition, or sound Catholic sources, from pre V II are not available. One could utterly and absolutely ditch every word that has been written during and after V II and discover a far more beautiful Church that he ever imagined, utterly free from the temptation to be loved, or liked, or at least not mocked.

The solution is doing everything the Catholic way, without compromise; and I am sorry to have to say this to you, but the whole V II is nothing but a big fat compromise.