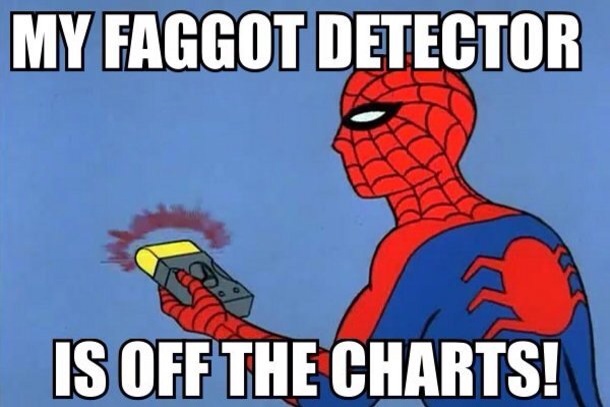 I seem to notice a new turn of phrase around: “men who have sex with men”, short: MSM.

Whilst it is always difficult to know what moves libtards to always new stupid expressions – I struggle to follow the ever-expanding series of initials for faggots, dykes, trannies and assorted pervs – in this case it seems to me the reason for this Neo-libtardism is evident:

1. To suggest that a man might have sex with another man and not be a faggot.

2. To avoid the use of the word “gay”, thankfully now commonly used as mockery.

All those libtards are either practicing perverts, or think there's nothing like “perversion” even if they “happen” to be straight. Therefore, they must try to create the legend that a man might be “bi”, or – as they also say, hilariously – “curious”.

Erm, no. Men like women. Not dykes, nor faggots, nor strange surgeon freaks. Women.

I truly wonder whether the people who use words like “MSM” would mount their dog (MMD), or sleep with their sister (MSS) or their mother (MSMo), or their aunt (MSA) out of “curiosity”. I do not want to know the answer.

These bunch of perverts or aspiring such are trying to sell perversion as another form of normality, and to persuade you it is even compatible with being normal. Their aim is to persuade the mainstream idiot that a “gay person” is not even “different” in any perceivable way from the “normality”.

I truly wonder how many of these perverted retards produce faggots and dykes, or whatever might be in the middle. I mean, what has remained of masculinity in a man even thinking in this way? How can he raise a normal boy, or a sane girl? Is not a man who cannot find anything wrong in a pervert the very epitome of one, though he might not be practicing his perversion? Which sane person would want to have such a father? And this is supposed to be the generally accepted thinking?

Beware of words. They are very dangerous.

Comments Off on “God Rest You Merry, Gentlemen”

Oh, those poor, poor sodomites, don't you feeeel for them? They are so discriminated against, “judged” by an unjust society (I know: this is a judgment…) and driven to suicide by the “bullying” of those who call them… faggots! Which obviously is what they are, but it's so cruel, so cruuuel! To think that they are so good!

(Now please, as you say this, stop a moment and savour the feeling of smug superiority; the squatting on the moral high ground; the enjoyment of one's own advanced spiritual state. Then prepare to wake up to reality….).

Alas, it turns out the “good faggot” is, in the majority, rather an aspiring killing machine, and willingly so.

Who would, knowing that he has contracted a disease that could be deadly in others, expose them to this very dangerous disease only to increase his own sexual pleasures? Two faggots out of three, that's who.

Notice here that the percentage mentioned is not of those who abandon themselves to disgusting acts of sodomy, but of those who do not wear condoms as they do so. Full knowing they are HIV positive. Merely to increase their own perverted pleasure. Of course they are supposed not to commit acts of sodomy in the first place, but this is an act of sodomy (alas, not a criminal offence anymore almost everywhere) with the addiction of what must be, surely, a criminal offence in many Countries!

It boggles the mind. It squarely makes of fags the enemy number one of fags, their own willed target for potentially deadly infections. Gaystapo as it breathes and sodomises.

What people still seem not to understand (because they don't know jack of God, sin, or the devil) is how damaged the soul of an homosexual already is. Whilst not every homosexual acts with faggoty behaviour to satisfy his perversion, unless we understand the gravity of this truly satanical perversion we wil not be able to understand its consequences. Only people firmly in the hand of the devil can be so astonishingly, diabolically self-centred as to put not even their own pleasure, but merely its maximum enjoyment at a premium over other people's health and perhaps life.

I do not know whether Fags hate the humanity at large, but there can be no doubt only self-hate and hate of the other fag can drive people to such level of depraved cruelty. Only Satan's hand could deform a soul to such an extent of dehumanising use of other people's body.

The Nazi doctor who performed cruel experiments on his Jewish victims might, perhaps, have deluded himself he is advancing the progress of humanity. He also did not have any personal relationship with his victim. But the HIV-positive faggot consciously exposing others at the risk of infection perfectly well knows he is only advancing the cause of his maximum pleasure, and must have at least a fleeting personal relationship with the man (oh well…) whose life he is putting at risk for no other reason than the most perverted, most short-lived of advantages.

Scratch the Sodomite, and you will see the monster. It is in the logic of Satan's work, and it is a master accomplishment of the same Satan to have persuaded so many that with the act of sodomy the faggot, rather than Christ, is the lamb that was slain.

People have no idea of what sin is anymore. You tell them sin is what offends God – and therefore sodomy, a sin crying to Heaven for vengeance, is one of the greatest offences imaginable – and they look at you incredulous, lost, or in utter mockery. They also have no idea of who Satan is, or what he can do to us. To them, everything is good until someone gets hurt. Unless it is a sphyncter, of course. Or an unborn baby.

God might not hate fags, though he most certainly hates their faggotry.

But boy, do they hate each other.

This stupid society does not understand that one cannot be satanic by half. If one is ok with sodomy, it will only be a matter of time until he – or his children, or grandchildren at the latest – are fine with every other sort of abomination under the sun. Then the sins of the fathers shall be visited upon the children, as it is supposed to be.

Comments Off on Say Hello To “Paedophobia”